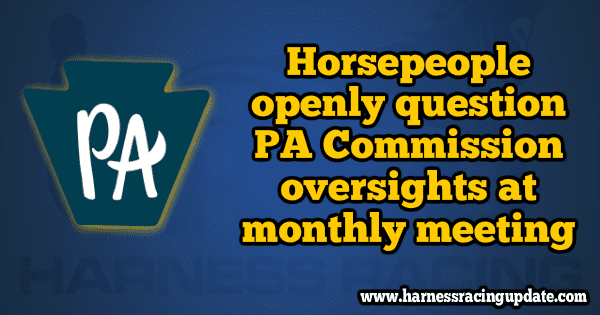 Lawyer Alan Pincus spoke Tuesday on behalf of horsepeople concerned about recent reports published in the Paulick Report. The PA Commission responds with a detailed statement.

A combative relationship between some Pennsylvania standardbred horsemen and the Pennsylvania Horse Racing Commission (PHRC) continued to brew Tuesday (July 31) at the monthly open meeting held in the state capital.

Attorney Alan Pincus, speaking on behalf of horsepeople in conflict with the commission’s drug-testing procedures, used his three minutes of public-statement time by telling the body of commissioners, “I am not your enemy.”

However, Pincus quickly followed up that firm standing by calling the ruling commission’s practices “an example of massive malfeasance.”

Before Pincus began his time before the commissioners, the chairman read an official statement (below) in response to a follow up on the entire controversy, which had been documented in articles posted online in the Paulick Report.

The commission’s statement firmly defended its official racing laboratory (the Pennsylvania Equine Toxicology and Research Laboratory), reflected a review of some horseman’s objectionable behavior concerning no penalties issued to some horses that tested positive for serious substances after racing and collecting their purse amounts.

In the statement, however, the commission admitted the contentious tests had been the product of “oversights.” Aside from mentioning that the oversights occurred during the commission’s transition from one type of body to another, calling the lack of attention to positives oversights was the extent of the commission’s admission to its responsibility.

That was not enough for Pincus, as he made note that no details were included to define “oversights,” no less that they had not been addressed before the horsepeople brought the issue to the attention of the ruling body.

Pincus further called for an outside investigation. “I’d like the Inspector General or someone of that nature to look into it,” he told HRU in a conversation after the meeting. “(The commission) admitted malfeasance,” he said, “when they said it was ‘human error.’”

He said that from the commission’s own paperwork, a horse in a stakes race horse tested positive for oxycodone and the results of that test were “thrown in the garbage because they thought someone made a mistake.”

He also referred to a Pyrilimine positive that was also dismissed due to human error. “It may be true, it may not be true, but they won’t explain.”

The explanations missing, he said, are the details of the human error. The commission did not specify who made the error or what exactly kind of error was involved. “And they don’t explain how their system is inept that it got that far (as to be defined an error). And why when they finally found out (it was a positive) they still didn’t want to call it a positive and they basically wanted to cover it up.”

When asked what he thought the commission would have to gain with such a cover up, Pincus said, “I don’t want to speculate as to what but these are influential people who benefited by drugs not being called positives.

“He listed a few positives from the Ron Burke barn, the president of the owner’s association at the Meadows … is this coincidental? We don’t know and that’s why we need an independent investigation … at the least it is extreme incompetence. At the most, who knows?”

Trainer Anthony DeFrancesco said, “All horsemen are concerned that nothing is done about positive tests that are not reported.”

DeFrancesco echoed. Pincus’ requests to have the commission reveal details. “Just tell us why. Give us an answer.”
Statement of the Pennsylvania State Horse Racing Commission on equine toxicology testing issues recently reported on by the Paulick Report, issued at its regular monthly meeting of 7/31/18:

As the result of significant misstatements of fact appearing on the Paulick Report from various sources, the State Horse Racing Commission wishes to make the following statement of facts to dispel the misinformation:

Regarding the Moonshine Hanover lab test result from a race at Harrah’s Chester Downs run on September 11, 2016, a lab test result showing a presence of oxycodone did not result in discipline due to human error on the part of the Acting Director of Standardbred Racing at that time.

The person assigned to temporarily fill that position simply failed to take notice of this particular lab test result while five other lab test results showing the presence of oxycodone were acted upon in that time frame. Keep in mind that all lab test results are 100 per cent anonymous to both the Bureau Director and the laboratory at this point in the process. The oversight was not known until May 2017. Based upon scientific and legal input sought by the Commission’s staff, the decision was made not to impose discipline at that time. That same scientific and legal input had previously caused the five other oxycodone matters to be settled several months earlier.

The oversight occurred several months before Standardbred Bureau Director (Brett) Revington commenced employment. Director Revington has implemented a mandatory protocol to: (a) review each lab test result containing findings with PETRL’s Lab Director; and (b) require each racetrack manager to submit monthly reports of any samples that are unresolved within 30 days. The State Horse Racing Commission stands fully behind Standardbred Bureau Director Brett Revington and fully endorses his actions to address these issues and prevent any future such occurrence.

The balance of the misinformation being circulated arises from a misunderstanding of when the State Horse Racing Commission adopted for standardbreds the 10 pg/ml ARCI threshold for betamethasone and flumethasone. That did not occur until February 27, 2018. All of the samples discussed in the Paulick Report were from before that date. At the time of all the samples being discussed, the Standardbred threshold in Pennsylvania was 100 pg/ml and every sample was in compliance. There were two betamethasone lab test results that were mistakenly called positives and penalties imposed, however that was corrected and all penalties were rescinded.

Along with this statement, the State Horse Racing Commission is issuing responses to a set of questions posed by Joe Gorajec on July 18, 2018:

1. Was the owner and/or trainer of the 2nd place finisher in the 2016 PA Sire Stakes Championship notified that the horse tested positive for Oxycodone? If yes, when and by whom?

No. As you were previously informed, due to human error in processing one lab test result by the predecessor to Bureau of Standardbred Racing Director Brett Revington, there were no lab test results declared positives from the September 11, 2016, 9th race at Chester Downs. The word positive is a term of art with a specific meaning when used in Pennsylvania equine toxicology testing and license discipline. It means a lab testing result that is determined by the applicable Bureau Director to form the basis for disciplinary action against an occupational license holder.

2. Will the money earned by the horse in question in #1 above be forfeited and redistributed? If yes, when? If no, are any efforts to made to pay back the owners that would have received additional money had the purse been forfeited? If yes, please explain.

No. No lab test results were declared positives by the Bureau Director from the September 11, 2016, 9th race at Chester Downs and no action of the sort referenced in your question will be taken at this time.

3. Please name the individual(s) and title of the person(s) to whom PETRL directly sends it findings to.

SHRC staff never “overrode” any lab test result at any time. On the dates referenced, the SHRC’s threshold for Betamethasone in standardbreds was 100 pg/ml. All lab test results from the dates referenced were below the applicable threshold for Betamethasone applicable at the time. As you were previously informed, the SHRC approved the ARCI Therapeutic Medication Guidelines for standardbred racing on February 27, 2018. That action lowered the threshold to 10 pg/ml. This was published in the Pennsylvania Bulletin on March 17, 2018.

5. What information did you rely on to determine that the threshold level was 100 pg/ml? Please provide a copy of that information.

The threshold for Betamethasone of 100 pg/ml adopted by the former State Harness Racing Commission in 2009 was based upon equipment limitations located at the Pennsylvania Equine Toxicology Laboratory staffed by the University of Pennsylvania School of Veterinary Medicine.

6. If the threshold level for betamethasone was 100 pg/ml, then why did the laboratory call a positive test on all four horses even though each had a concentration below 100 pg/ml?

As stated previously, the laboratory does not “call a positive.”

August 30, 2016 – A lab test result was incorrectly declared a positive by the predecessor to Bureau of Standardbred Racing Director Brett Revington on approximately 9/20/16 and later corrected on approximately 12/17/16. All portions of the penalty were rescinded and USTA removed the ruling from its database.

Sept. 22, 2016 – A lab test result was incorrectly declared a positive by the predecessor to Bureau of Standardbred Racing Director Brett Revington on approximately 11/1/16 and later corrected on approximately 12/19/16. All portions of the penalty were rescinded and USTA removed the ruling from its database.

November 26, 2016 – A lab test result was incorrectly notated (internal only) by the predecessor to Bureau of Standardbred Racing Director Brett Revington to be a positive but corrected the following day.

July 11, 2017 – A lab test result from this date was incorrectly notated (internal only) to be a positive but corrected approximately six days later. This was due to the +/- margin of deviation bringing the provable level below the threshold.

7. If the threshold level was 100 pg/ml, why did you forward these positives to the track for disciplinary action?

See previous response to No. 6.

8. If the threshold level was 100 pg/ml, why would the judges at Meadows find a violation and issue a ruling penalizing Mr. Johnston?

9. When were the Judges notified that the threshold level was 100 pg/ml? Please provide a copy of that documentation.

The adoption of the standardbred threshold for Betamethasone of 100 pg/ml by the former State Harness Racing Commission occurred in 2009.

10. When were the Judges notified that the threshold level was 100 pg/ml? Please provide a copy of that documentation.

This is a duplicative question.

12. How many of the finds reported in question #11 above resulted in written rulings reported to the USTA.

One was over the applicable limit and resulted in a ruling reported to the USTA.

13. Who established the 100 pg/ml for Flumethasone? Please provide the information relied on the make that determination?

The standardbred threshold for flumethasone of 100 pg/ml adopted by the former State Harness Racing Commission in 2009 was based upon equipment limitations located at the Pennsylvania Equine Toxicology Laboratory staffed by the University of Pennsylvania School of Veterinary Medicine.

15. How many of the findings reported in question #14 above resulted in written rulings reported to the USTA.