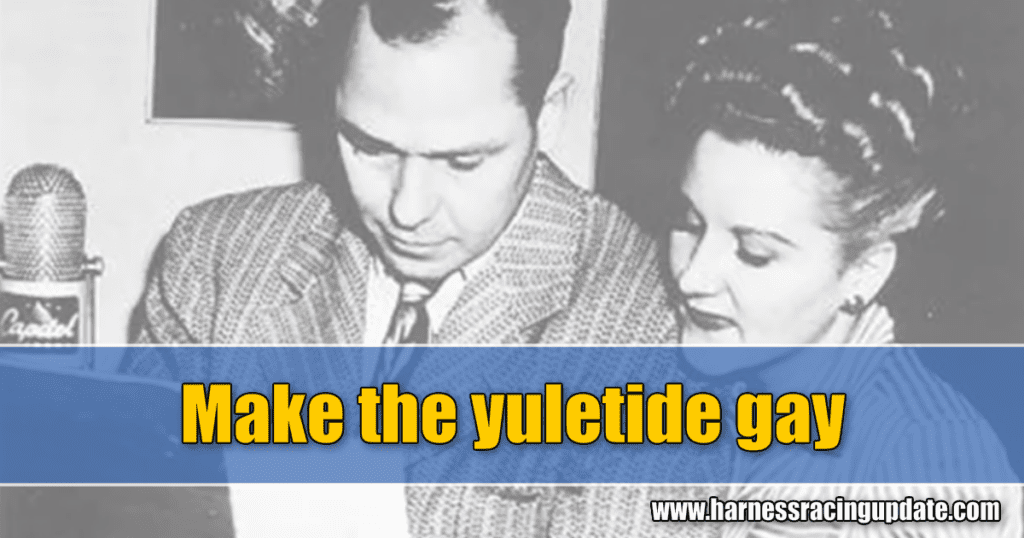 “Old age is like everything else. To make a success of it, you have to start out young.” — Theodore Roosevelt.

Editor’s note: For the third year in a row, HRU is delighted to feature not-the-usual Christmas story from trainer and screenwriter David Mattia (IMDB page here). His previous yuletide stories can be found here (2016) and here (2017).

When I was a kid, I shared my Christmastime birthday cake with two aging uncles. The two men, Uncle Anthony and Uncle Joe, had absolutely nothing in common apart from chain-smoking Pall Mall cigarettes, sharing the same birthday as me, and the fact that they’d each married one of my grandmother’s sisters. I loved them very much. Sharing a big birthday cake with them each year was more fun for me than Christmas itself.

Gee, I must have been a great kid, right? Wouldn’t most kids moan about sharing a birthday cake with old people? Of all the birthday cakes and candles I can remember, the ones that I shared with my two awesome uncles were the happiest days of my life. Still, despite my enthusiasm, each year I feared more and more that my uncles would eventually die, and that the time would come when I would celebrate a birthday shared with no one. It’s not so strange for a little boy to worry about death in his family, is it? Perhaps the oddity of my childhood, the folks who surrounded me since I was a baby, had molded me into an old soul, and thoughts of people dying was perfectly natural.

Because my mom had configured our huge house into what was essentially a Bed and Breakfast for just about every aunt and uncle she had, I grew up in the constant company of older folks — people in their late 60s, 70s, and even 80s. I heard their music, watched their TV, used their archaic words, and listened to their conversations. When I was seven, I might just as well have been 70. Even today, a disproportionate part of my mind still lives in their world of 1930s and 1940s sensibilities. I don’t completely understand it, but I liken it to a small child who is exposed to a foreign language. The child absorbs and learns the language quickly. I think that’s what happened to me in the sense that I’m a bit of an anachronism. I was probably the only kid in the theater, or in the entire USA, who knew that the creepy ballroom music in “The Shining” was provided by Al Bowlly and The Ray Noble Orchestra – circa 1934.

The best part about being around these oldsters, is that they were all very young at heart. We always had a good time. It was all so very gay. Yes, I grew up in a home where everyone was happy and gay. I had a very gay childhood. Don’t jump to conclusions about my word usage. I will explain later.

Anyway, Uncle Joe was an eccentric musical person who looked like the actor Telly Savalas. Using the stage name Joe Whitey, because his bald scalp was so white, Uncle Joe had been a well-known drummer for the Johnny Mercer Orchestra. That doesn’t mean much to most people today, but if you happen to be about 100 years old, or a Big Band aficionado, or me, you’ll know that Johnny Mercer’s Orchestra was big time entertainment back in the days before, during, and after World War II.

Uncle Joe doubled on vibes whenever Johnny Mercer’s ensemble played in the New York area with the singer Margaret Whiting.

His favorite venue was a hot-spot in Newark, NJ called Patsy Klein’s. I think Patsy was a racketeer or something, and his supper club was a swinging place that came into being not long after the repeal of Prohibition. A lot of big names performed there. I assume Patsy’s had closed long before I was born, but the old people in my world often spoke about all the gay times they had there.

By the time I was born, the Big Band era was long gone, and Uncle Joe had quit show business. He worked most of his later years as a private investigator for his brother-in-law’s insurance company. How on earth did Uncle Joe pass for a private eye? His eye-catching clothing made him far too conspicuous. He wanted to look young and hip, but he usually missed the fashion mark by at least 10 years. In the early 1980s, when he was well into his 70s, and still working, he dressed like an old, bald version of something midway between Shaft or Super Fly and Austin Powers. He wore turtleneck sweaters, long fur coats, gold hippie medallions and bell-bottom pants. His attire was totally out of style and certainly not age-appropriate. At one point, until my Aunt Anne hid it in the attic, he wore a toupee in the style of Sonny Bono. Uncle Joe was a character, but he was good at his job, and his brother-in-law couldn’t operate his business without him.

One autumn day in early summer, when I was 18, Uncle Joe said to me, “I don’t feel good lately, Davey. My throat feels funny. Something’s tight in my neck and I’m always tired.” Of course, I didn’t want to hear this because I instantly sensed that Pale Death, the villain who already lived far too close to my world of old folks, was about to knock at our door.

Despite my sinking feeling, I joked to Uncle Joe about his health. I told him that a man his age shouldn’t be staying out all night tailing cheating husbands and insurance scammers. My suggestion must have boosted his spirits because he instantly went into a musical shtick that he’d done for me a thousand times. “Watch this groove, Davey,” he said. Then, with pencils, the tabletop and a candy jar as musical props, he improvised his jazzy thing.

Uncle Anthony, my other birthday partner, was a meticulous intellectual who had served bravely in the US Navy during World War II. When he was 36, and only a few weeks before the Japanese Instrument of Surrender, he was badly injured by the burst of a mortar shell blast. The sound of the explosion, so close to his head, caused permanent damage to a nerve deep within his right ear’s inner workings. Thereafter, and for his entire life, he suffered from hearing loss and balance control. Sadly, because of his ear damage and spells of vertigo, many narrow people accused him of being a drunk when in fact he didn’t drink at all.

His health issues notwithstanding, he worked his job at a local bank for nearly 30 years. After he’d retired, Uncle Anthony would get up every morning at 6 am, dress up neatly in a sport jacket, comb his hair with Brylcreem, and walk about a mile to the newsstand to buy his various newspapers. In the evening, he would sit alone in my mother’s office and read the New York Times from cover to cover. Our three dogs slept at his feet and our two cats lounged on the desktop next to him. He usually listened to a radio program hosted by a man named William B. Williams who played songs by people like Bing Crosby, Frank Sinatra, Rosemary Clooney, Dean Martin, Ella Fitzgerald – you know – music for old people like me.

In hindsight, I realize that Uncle Anthony was a very handsome and meticulously groomed man. By today’s standards he was very metrosexual. Even in old age, he had thick, black hair like Ronald Reagan, and he sported a pencil-thin mustache over his top lip. He was very suave, perhaps even elegant in a masculine way. He never used foul language and he never said anything unkind about anyone. People around town used to call him, “John Gilbert.” I didn’t know what that meant, but when I looked the name up in the library at school, I discovered that John Gilbert was a long-dead silent movie star. The resemblance was uncanny. Naturally this led me to learn more information about other old motion picture personalities. Thusly, my own backward movement in time continued. Did you know that W.C. Fields and Charlie Chaplin both died on Christmas Day? I did.

Uncle Anthony was basically an only child because his twin siblings, barely a year younger than he, had perished in a house fire when he was a toddler. Far too young to remember those tragic events, he said that he only recalled something about a fire and his mother crying.

When I had my first horse, Uncle Anthony would come to the farm with me on alternate Saturdays. He always brought newspapers, magazines and a little brown lunch bag he’d prepared for himself. He usually sat under an old tree near Brad Maxwell’s house on the grounds of Colts Neck Training Center. While he had nothing to do with horses whatsoever, he had grown up across from Weequahic Park – a trotting racetrack in Newark, New Jersey. For that reason, he was very familiar with harness racing.

Throughout the summer of my 18th year, Uncle Anthony started losing weight and his trips to the newsstand now required a lift from me or my mom. Just like Uncle Joe, who was now too sick to sing or drum, he complained that he didn’t feel well.

On Thanksgiving Day, despite the ugly inevitability of it all, we sat around a dead turkey and pretended that everything was just fine. My grandmother tried to lighten things up by talking about the old days.

“Remember all the times we went down to Patsy Klein’s to see you, Joe? Remember how we’d always bring my cousin Delia along because there were so many young bachelors there and we were always trying to fix her up?” Uncle Joe nodded and smiled. “Yeah, a lot of young bachelors,” he replied. My mother, forgetting herself for a moment, laughed and said, “Fix Delia up with who? Of course, there were a lot of young bachelors there. It was a gay night club. Didn’t you know that? They were all gay and they came out to see Margaret Whiting. That’s the place they went. It was a gay hangout.” Just then, my mother caught herself and hoped that no one heard her, but then, in his weak voice, Uncle Joe said, “Yes, those were very gay times and a lot of handsome bachelors too. Too bad that Delia never had any luck.”

In her journal my mother wrote: “Later that night, Uncle Anthony pulled me aside and told me that everyone, including Uncle Joe, knew the score about half the crowd at Patsy Klein’s, but that it didn’t matter to him or to anyone who got past Patsy’s doorman. He said, ‘Sure, we knew that a lot of the guys there were gay, but we didn’t have that word back then. Those were very gay times, Marielle. I’ll never have gay times like that ever again…ever.’”

One month later, on Christmas Day, Uncle Joe and Uncle Anthony were both dead. They died two days and two rooms apart in the same hospital. It was the first time in my young life that anyone who mattered to me had died – and it was my birthday. By my choice, we celebrated with a Hostess chocolate cupcake and one candle and Margaret Whiting singing from the tape player. There were no Christmas lights on the front door and no smoldering cigarettes in the ashtrays. The dogs were still sniffing around the house looking for Uncle Anthony, and my grandfather cried when I blew out the candle. I had never seen my grandfather cry. That’s how I remember my 19th Christmas. It wasn’t a very gay time at all, but the memories of my uncles, and the joy and culture they brought into my life for 19 years, are very gay indeed.