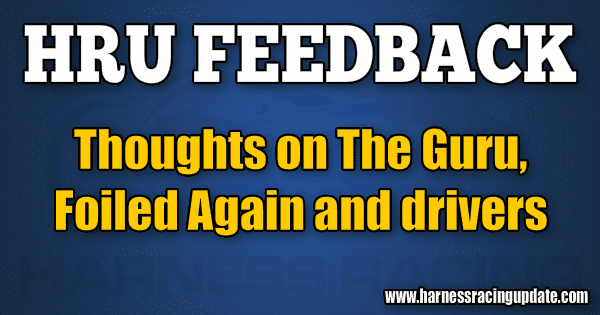 Agreeing with The Guru

Glad to see the Guru make the correct call regarding races where Takter is driving in the same race with “catch drivers” on his other horses (full story here).

This has been going on for quite awhile. This also applies when the Takter is Johnny, as witnessed by a deferential drive Gingras gave on Hambo day. In this race, Gingras passed up an opportunity to brush to the top ahead of a zillion to one longshot, which would have put the main competition (Takter driven) in the disadvantageous 3-hole. Instead he waited extra long for Takter to move around the longshot before he moved. As “luck” would have it, the 5-1 second choice Takter-driven horse just got up to beat the Gingras-driven, Takter-trained, mega-favorite at the wire — from the advantageous 2-hole.

As Mr. Gurfein pointed out in his article, this is not to say (in the similar race he cited) that the catch driver was not trying to win. But this ongoing “deference to drivers named Takter” has been obvious to handicappers (aka, harness racing customers) for a while and does not pass the integrity-sniff test. Not by a “long shot.”

It can only be a plus for harness racing. He’s raced in Delaware a number of times in the Quillen. It would be great to see him either at Harrington to Dover one more time. Hopefully his owners can see their way clear to do that as part of his final racing year.

Can you hear me now?

Well it seems obvious that the customers have spoken and the message has fallen on deaf ears. Last week The Guru Mr. Gurfein repeated my feedback on the clash of Atlanta and Manchego (full story here).

In that race we failed to get the best punches of both fillies as was obvious from the beginning with Scott Zeron’s lack of racing interest with Atlanta.

Now we see the most recent races at Yonkers culminating in the $500,000 Messenger Stakes. During the pre-race discussions between the two Yonkers track handicappers, they discussed the timid drive Scott Zeron put up with Stay Hungry during the eliminations and how they thought with the money on the line we might see the real Stay Hungry. Well they were right, Zeron chose to NOT put the pedal to the metal in the elimination and save it for the final and that’s great if you’re the owner.

And that folks is the problem, none of the principals care the slightest that they cheated those bettors last week in knowing before hand they were not bringing their best effort to the races. I can only conclude those in charge at the racetracks condone this behavior as I don’t see any questions, fines or purses withheld. If the track management was really concerned they would of already taken action, how about non-wagering elimination races? But not a peep from the management or the sanctioning bodies. Well we are at a tipping point my friends and frankly I’d rather keep my dollars in my pockets till I see meaningful change. So there’s the question “Do You Hear Us Now”? No wonder harness racing is losing the battle to develop new customers.