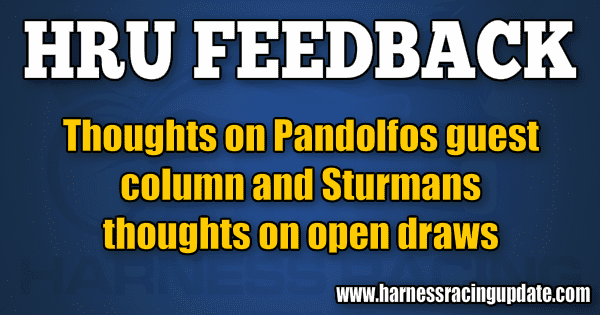 Mr. Pandolfo can tell us that things such as equipment, conditional racing etc. have caused more odds on favorites to win and subsequently there is less interest from fans all he wants, but he is missing the other “huge” reason. Cheating, cheating and more cheating by trainers with their illegal drugs. Every Friday the USTA publishes in detail who got caught and it never seems to end. We also see time and again that these cheaters miraculously reappear as if nothing ever happened only to try some new drug or use a “beard” trainer to carry on their dirty work. Additionally, without a standard set of rules for all tracks, we see inconsistent rulings for Euro-Rail and breaking before the start of a race violations. How about 30 per cent takeouts at a track like Pocono Downs? Have you seen their almost non-existing betting pools combined with so many drug violators training there? Young people aren’t stupid. They know a bad deal when they see one and harness racing has become a really bad deal. Yonkers, Dover, Monticello, Pompano Park and others are all near empty with live fans. Trust me it is not about the new sulkies.

I strongly agree with Bob that something has to be done in harness racing to offset the ridiculous number of winning favorites. The industry has to come together and work together to see all tracks get full fields and the winning percentage of favorites are reduced. I agree with the A, B, C classifications and to eliminate horses just finishing to collect checks set it so that if you don’t win in so many starts they get moved up instead of down. I would also stop horses moving for a start from Mohawk to say Western Fair for an easy purse. If they drop in for a easy race they can’t move back to the A circuit such as Mohawk lower classes until they win their way out of the top class at Western Fair and then they would have to compete at a higher class at Mohawk. As for post bias, Marty Adler had a perfect solution to give the outside posts a chance at Western Fair where the inside posts are dominating and that was move the start back to give a longer run to that hazardous first turn. Not as they were thinking of adding a passing lane where you sit second then use the lane to win, this would cripple their already boring, low payoff racing. What ever is decided something has to happen sooner or there won’t be any later.

I agree with everything in Mr Pandolfo’s article, but I’m afraid none of it is really on radar of the people that can create change. The sport (business) has become so reliant on money from other forms of gambling that the majority of horseman have no idea what the handle on there races is or do they seem to care. Their only concerns are race days and purses, which have become totally disassociated with handle. The tracks that have other forms of revenue don’t care to the level they should and the Meadowlands where the handle does matter is so handcuffed they are not in a position to create change. It is definitely short sighted in my opinion for this malaise towards handle as although we can argue how quickly in the future handle will again become important it definitely will. It’s an odd situation that are sport has found itself in as the viability of the tracks and the horseman are not tied together. So, with this in mind, I would hope that horseman organizations and the other powers in the sport would try and force some forward thinking ideas onto the business model.

What we can learn from Down Under

I noticed something interesting in Sunday’s (Aug. 26) edition of HRU. Following Bob Pandolfo’s commentary on wagering, handle and changes in racing, you published an interview with New Zealand driver Dexter Dunn. In that interview, you added a photo of Dunn and driver Chris Ryder. Both appear to be seated in old-style wood-shafted sulkies, the very factor that Pandolfo mentioned as one reason for the high level of short-priced winners and entrants at North American tracks. An interesting exercise might be to compare the use of the traditional bike down under with the faster sulkies that dominate the sport here and in Canada. While I understand there are other differences in racing styles between North America and New Zealand-Australia, such an examination might provide some evidence for Pandolfo’s theories. Also, a recent column on ustrotting.com by Bob Carson discussed the popularity and competitive nature of amateur racing. Maybe one of the American tracks (Pompano Park, are you listening?) where amateur racing is frequently conducted could incorporate this idea into those events. Make the use of the traditional sulkies a requirement for selected amateur driving events. This would add a new flavor to an already-exciting style of harness racing, and might provide the impetus to use the old bikes on a wider basis on other North American tracks. Those of us involved in the industry are always looking for new ways to bring back the popularity and excitement of our sport. Perhaps one “new” way would be to bring back something “old”.

I have been following harness racing since ’92. Living in New York, I have made many visits to YR and M1. While it doesn’t seem like a long time to me, reflecting back, it is. Watching Campbell, Pierce and Lachance helicopter in to YR was a distant memory since many of the current drivers were still children.

The open draw has been paramount in my opinion. Yes it could be ill fate to Freight and company, or maybe not. This is like a card game where you can buy in the game, but not your spot. It’s not uplifting when you put big money down, but on the upside, how many times at Yonkers do you see the eight-horse win the Open handicap? Quite a bit. Pacers and trotters!

Now that the playing field is level, the best horse will win with the best trip, as we know it.

This will certainly be more entertaining than Freight drawing the rail and possibly watching a 1-9 waltz around the Hilltop. Long live harness racing