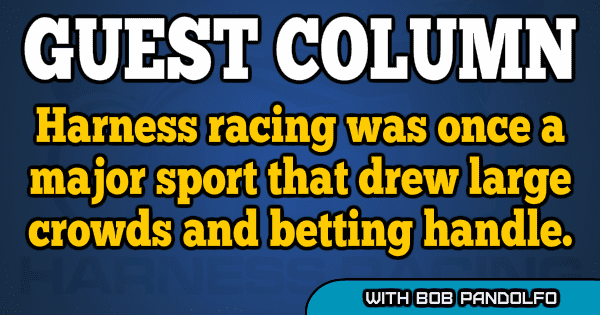 The business of betting

You would think that some of the harness tracks would look at the successful thoroughbred tracks and see how they can try to emulate their success.

We talk a lot about the business of racing. Do people still bet on horse races? Well, almost $170 million dollars was bet on the races at Belmont Park on Belmont Stakes Day. Gulfstream Park’s winter meet just set a record for handle for the second straight year. Last Saturday (Aug. 18), Del Mar set a record with almost $26 million being bet. I guess there are still people who like to bet on horses.

Over the years, the percentage of winning favorites at harness tracks has steadily increased to the point where some tracks have over 50 per cent winning favorites. In fact, as of this writing, there are two half-mile tracks in the U.S. where the favorite is winning at over 50 per cent, and one harness track that races all year long where the favorite is winning at 49.5 per cent. In thoroughbred racing, the overall percentage of winning favorites throughout the industry is about 36 per cent, a little higher than it was years ago.

Thoroughbred racing still has good payoffs, especially when they have full fields. Harness racing not only has a much higher percentage of winning favorites, but a lot more odds-on favorites. And, horses win from off the pace on a regular basis at most thoroughbred tracks. Many harness tracks are speed favoring and outside posts win about half as often as they used to. In the past, harness tracks that did good business did not have severe speed and post position biases. Obviously, this needs to change.

Here’s my checklist of the kind of racing I want to see at the track I’m in charge of:

Here’s my checklist of the kind of things I don’t want at the track I’m in charge of:

Now most of you probably know that I think the modern day sulkies have severely hurt the sport. I’m not going to go into my usual rant, because I want to cover other things. But, I am going to include two comparison photos. One is a horse in a wood bike with the driver sitting straight up, the other is a modern day bike and driver.

As you can clearly see, even without the driver leaning back, the modern bikes positions the driver much farther away from the horse. When you extrapolate it out, you can see why horses don’t win from off the pace that often anymore. A horse that’s third over now probably has to make up an additional twenty feet, as opposed to the way we used to race. In many races, this makes it mathematically impossible for the horse to win. And the fact that the drivers lean back makes it worse.

If you think about it, the industry has no one to blame for this but itself. We literally made changes that make the races less exciting.

So one of the first things I would do if I ran a half-mile harness track, I’d buy a set of harness sulkies similar to the ones that were used when the sport was much more popular than it is now.

Another problem a lot of tracks have, there are too many 2-5 shots. About 70 per cent of these short-priced favorites win, many win by open lengths.

There are two main reasons why harness racing has some many heavy favorites:

Years ago, harness racing switched from the ABC classified system to the non-winners system, which was used in thoroughbred racing. But thoroughbred racing can get away with it, because the races are more unpredictable. Thoroughbred’s race at various distances and surfaces.

Almost all harness races are raced on dirt at one mile. And the non-winners method of classifying the races clearly isn’t working. The problem is, horses take multiple drops in class. It’s not unusual to see four or five horses taking a sharp multilevel drop in class on the same card. If a horse drops from a Non Winners of $15,000 in last 6 starts to a Non Winners of $6,000 in last 6, it creates a lopsided race. And that’s the exact opposite of the kind of race you want.

The knock on the ABC system was that an owner could just tell the driver to keep finishing second and third and kind of milk the system. In other words, stay in the same class and pick up checks. But, in the ABC system, horses could only drop by one level. Years ago, you hardly ever saw a horse go off at 2-5, unless a great horse was in the race. Now, there are way too many 2-5 shots.

I don’t know if the ABC classification is the answer, but I do know that the non-winners method of classification is not working well for most harness tracks. Years ago, when the Meadowlands did big business, it worked. But the Meadowlands had 10-horse fields, big purses, and a long stretch. With the speed and post bias we have now, it simply doesn’t work anymore. I’m shocked that almost every harness track still uses it.

Horses should only be allowed to drop one class level. Period.

Another reason why there are so many short-priced winners is the post position bias. For instance, on a half-mile track, bettors see that posts 6, 7, and 8 hardly ever win, so they bet the inside posts. Consequently, a horse that should be 2-1 goes off at 3-5.

There are several ways you can do away with the post position bias. You can go back to the old bikes, or, race at longer distances, or, start the race earlier (longer run to the first turn), or, put posts 7 and 8 in the second tier. Or, try some combination of these.

There’s no reason for tracks to have 50 per cent winning favorites and a slew of $2.40 winners that key short-priced exotics. This is not something that can’t be corrected. What amazes me, you see all of this money still being bet on thoroughbred races… you would think that some of the harness tracks would look at the successful thoroughbred tracks and see how they can try to emulate their success.

The tracks that have the highest handle have good payoffs. Obviously, short payoffs are bad business. You have to make changes so that the races are more competitive and the payoffs are better. This isn’t that hard to figure out.