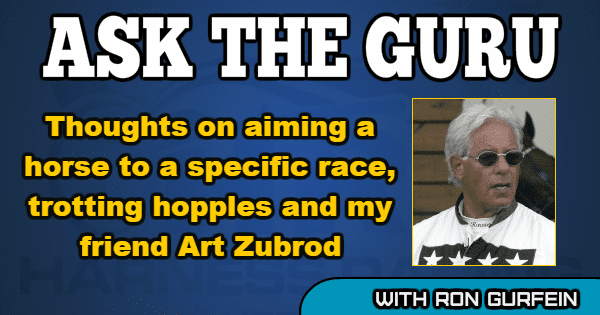 Thoughts on aiming a horse to a specific race, trotting hopples and my friend Art Zubrod

Tidbits: Congratulations to Ronnie Burke on his hometown Adios win. There were more people in the winner’s circle than I ever saw on the hill during the early ‘80s. Great drive by Matt Kakaley the baby faced “new John Campbell” to quote Erv Miller.

Congratulations, as well, to Trond Smedshammer, Jimmy Takter and Yannick Gingras for the amazing elimination victories in the Hambletonian Oaks. Makes the girls look as important or more so than the open division. Will be one of the best days in racing in modern times. To quote the golden voice “Be there.”

Special shout out to Jimmy Takter for not giving in to media pressure and racing Lazarus on Hambletonian Day. He knows his schedules better than the press and he felt he was too hard on him, and to race him back so quickly would be a mistake. We will miss the show but to protect a great horse like that is more important. The thought of handicapping Saturday’s card makes me tremble. That is some project, I better get out my dart board.

The kid I remember that would play Zorro in the winner’s circle pulling out his whip like a sword and making a Z in the air is trying to add his name to the history of harness racing. Rick Zeron will try to beat the boys with Atlanta, his highly-talented trotting filly. This was not a last minute decision as I think he had his heart set on this in January. He is a top trainer and the filly will make a good showing.

D Romano asks: Ron, What are your thoughts on trotting hopples? Do you think there should be separate races for hobbled and unhobbled trotters?

The second question is absurd, the answer simply is of course not. The first part I have answered before in this column but I had some further thoughts on the matter due to the crazy speed we are witnessing in the trotting ranks this year.

I hate trotting hopples and this is common knowledge, as I am a purist. When I was a younger lad I tried to race many of my pacers free-legged with some degree of success.

However, in today’s world with yearling prices where the stand for the trotting horse they are a necessary evil. The trotting gait has radically changed in the last few years with the emergence of Muscle Hill, Chapter Seven and even a little with Trixton.

It really goes back to Crazed, as the point that I first took notice. All these sires have foals that almost pace in front. Many horsemen call them daisy cutters, and until recently they were never really good at trotting. Now they are dominant and the reason is obvious to me. The Scandinavians have been the most successful with the new breed because they use the straight track so much. It teaches speed and confidence as well as building muscle. All these things are important with the new gait. I personally am mystified as how some of these horses stay trotting. Manchego, won Saturday for fun in 1:51. Yannick never asked her for anything. She ducks her head runs out and has as big a gait as you can find. With her head bobbing every step of the way and she never makes a break. Great training and great driving is my only answer. Plunge Blue Chip the fastest 3-year-old ever, her gait leaves a bit to be desired. Neither one, or the brilliant Phaetosive wear hopples. But the American and Canadian trainers that mostly train on the circle have the hopples on many of the foals of the stallions listed above.

I am going off on a tangent, but one worth discussion. Sometimes I think we are breeding ourselves into a black hole. The colts are going faster for sure but we must be very careful who we breed the Muscle Hills and the Chapter Sevens to. If we aren’t careful we may end up with the Stars Pride and Speedy Crown pacers.

Johnathan Icarus asks: What is the hardest thing to do when you are aiming a horse to a specific race? Does it take weeks, months or days? After the horse has peaked, is it time for a layoff?

By far the hardest thing to do is avoid the pitfall of greed. If you are pointing toward the Hambletonian with a legitimate chance to grab the gold ring I would find it hard to race in Canada then go to The Beal then the Dancer and the big dance. You must forego something or have a super horse. It doesn’t matter which you pass up it depends on the colt himself, he will tell you how he feels, how he bounces back after each encounter. I personally am one for less is more. There are always exceptions to this especially with trotters. Sometimes a colt will be erratic if he is too fresh so you are better off racing him a bit tired but this an unusual occurrence.

The answer to part two is it takes forever, not weeks, months etc. If you have a top horse it starts in February with staking and proper training. Then when to start racing and what races. It basically a never-ending task, with many sleepless nights.

The last part of the question amuses me as I encountered this problem first hand in 1991. MB Felty won the first heat of the Hambletonian and finished second in the final. My first ever entry to the race. I was at the barn with Frank Antonacci, looking over the stall door after the races at the colt that appeared more than tired. We looked at each other and decided we should turn him out for a week before he resumes training. You know the rest of the story. The first hour he got a leg caught under a fence and never raced again. Am I against turn out, maybe not as bad as I was but please be careful. I blame no one for the accident but myself as I should have sent a caretaker with him to watch him in the field — especially the first day.

I really don’t believe a horse peaks for one race I think when a horse peaks he remains at that level for a while it maybe three races or many more depends on the animal. There are horses like Manchego, Continentalvictory, and Muscle Hill that peaked in June of their 2-year-old year and stayed that way forever.

Nick Salvi asks: I know how close you and Art (Zubrod) are what would it mean to you as a friend to see Wolfgang win the Hambletonian?

EVERYTHING, just like when one of my kids did something spectacular.

We have been friends for more than 25 years and never had a fight. Art and Leah had me as a house guest for a month. I had the best meal (L’ami Louie, in Paris) and the worst meal (an Indian restaurant on 25th and Park Ave in New York) with Art. He raised some of the greatest horses I ever raced including two Hambletonian winners, Continentalvictory and Self Possessed.

I thought Summer Savory (the dam of Wolfgang) had a ton of ability and if it weren’t for some soundness issues we would have raced her longer. Both Art and Leah are so dedicated to the sport and have been all their lives winning would be like icing on the cake. They have been producing for all of us and now it’s their turn. It would take 10 columns to list the great horses they raised at Brittany farm so I will not attempt it, but we all know who they are.

My relationship with Wolfgang doesn’t end there. I have been very friendly with the Hatfields and Jimmy (Takter) and I, have been close for 30 years. I can’t leave out Yannick who I told in Harrisburg that his search for the Holy Grail would end this year with a Hambletonian win on Wolfgang. We met a Mangi Qui a local restaurant and I told him that Wolfgang was a top horse and he would be happy with him. A short while after he left the winner’s circle Yannick sent me a simple text “You were right.” It made me smile.

Thanks again to all my readers for the kind words. Please keep the questions coming. I will have a column tomorrow with selections and comments on the Hambletonian, The Oaks and a few other races. Have a great week.

Have a question for The Guru?  Email him at GurfTrot@aol.com.