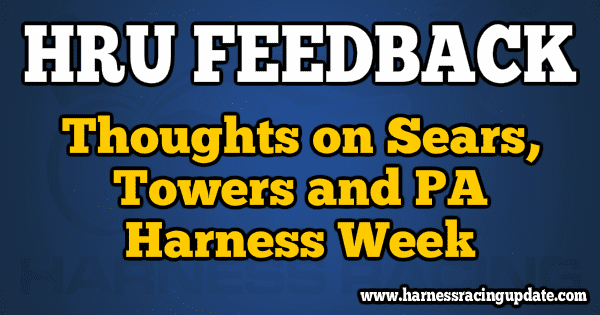 Sears should have been banned

I agree that Brian Sears should be banned from the Meadowlands (full story here). Jeff Gural has done WAY more than anyone should to save the Meadowlands. All he has asked for is a little help in return.

Sears has made a ton of money at the Meadowlands. He now expects to show up just for the big money. That is selfish and immature. As a businessman, if a client who has given me a lot of business wants me to help with a charity event, I gladly do it for free. People that help me in the past have my back and I have theirs. If harness racing is going to thrive everyone needs to help. Jeff Gural isn’t asking for charity. Sears would make money at the Meadowlands. Maybe he wouldn’t make as much, but it’s the right thing to do. I get tired of all the criticizing of Gural. How many people in this business have spent millions of their own money to try and help this sport? Grow up Brian Sears and be a team player.

In reference to Dean Towers’ article on growing stakes handle (full story here) look no further than The Meadowlands Pace. In my opinion there is no more important race for pacers (all ages) than this race. Is there a single race for pacers over the last 10, 20, 30 years that attracts a bigger handle than this race? Yet the horsemen, trainers, owners and competing tracks fail to recognize this. The Meadowlands Pace winner has the same attractiveness and marketability angles that the Kentucky Derby winner has for this sport. Does the Hempt winner draw a lot of attention? Do the thoroughbreds run The Travers in the week between The Kentucky Derby and The Preakness? Racino money has kept owners in the game, but has done absolutely nothing to increase interest or new fans or attract new gamblers. Look no further than the last Breeders Crown. 15 entries, 10 or so trainers have an interest in the Meadowlands Pace? No support of the Meadowlands Pace from the horsemen and the totality of the standardbred world is a total disgrace.

As a big fan of PA Harness Week I was upset when it went off the air. When I heard it was coming back on I was thrilled — until I watched it. What happened to Steve? Heather is now on with the blonde girl who used to introduce them. And all it is now is just one race after another. No funny stuff like Steve and Heather used to do between the races. Steve and Heather used to make my Saturday mornings. But no more. I’m done.

I have one word to describe the new Pa Harness week show: B-O-R-I-N-G!

I have watched three shows and it hasn’t gotten any better! I used to love the show. What happened to Steve Ross?

A lot to digest in recent issues of HRU

I hope everyone had a chance to real last Sunday July 8th edition of HRU. There was so much information about the past, current and future of the sport hiding within. Let me see if I can tie all of it together.

First let me say that Trey Nosrac’s “Devo Rides” weekly column is fantastic. I’m not a reader but I would love to see it go to part 100. I can only hope that this is based more on fact than fiction. For those who don’t read it, it is basically how we can keep harness racing’s heart beating by using the changing landscape of betting with new and upcoming technology. To even simplify it more, how to keep and increase interest in racing. (Trey, sorry, I know it’s much more than my explanation).

Now I’ll tie in Mr. Romano’s Letter in “Feedback”(full story here). In his letter he wants more transparency regarding judges’ decisions. He states he bets via the Internet on electronic devices (current and future) and would like to see what influences the results of a decision. In his case they never showed the photo for win. Do you blame him for wanting to see it? I’ll take his request one further and say we need to flood the online gambler with info, not limit it.

Usually racetracks show the results of photos, inquiries, post parades, etc. How about showing the photo as soon as available? This isn’t the days of the instamatic!! Photos should be available within seconds after a race. Show the photo on screen ASAP, whether or not a decision’s been made!

I know a lot of tracks show replays of inquires as the judges are making their decision, but ALL tracks should use that practice. Don’t get me started on consistency as well!!

I added post parades. Most people bet online. It’s the current and the future. Now I only get to see each horse maybe twice during the warm-up. How about a camera on EACH horse?!? I know this is an added expense but I would pay for the service of pulling up any horse during the warm-up. This is done for sports fans on NBC. Multiple camera views that I can choose during the game. Use the cameras for multiple views of the race as well, live and for replay. The more information I get, the better chance of picking a winner.

Now I’ll tie the Sears banning and the purchase of Yonkers by MGM together (Mr. Fenty and Mr. Saks’ letters). I understand that these drivers, trainers and owners need to pay the bills and chasing the money seems like the right move, but when Sears and Brennan made their decision, I was torn. If you take the best of anything and hide it from those who need to support it, it will die!

Example, you take the best Broadway play with the best actors, directors, stagehands, etc; and move it to Poedunk, Montana. Broadcast it on KXYZ with a reaching signal of 10,000 viewers, how much success are you going to have getting advertising dollars? Is this the best plan for theater as a whole??

So we take some of the best and race at the Poedunk, Yonkers and hope that’s the best decision for all of racing. Dean Towers alluded to it once again this week, handle on the big races at Yonkers, (any race for that fact) are out handled by lesser events at bigger tracks. Let’s face it, you’re playing to a limited audience!! If MGM lets Yonkers die this is GOOD for racing not bad. Hopefully this will put some of the better players back into the mainstream again. Get this fact straight… you will never get the majority of people to move to Montana and you will not get people to bet ½ mile racing. Why is this? Well for one BIG reason, Mr. Pandolfo say it best in his “Feedback” letter, “Bettors aren’t chasing that $2.40 winner that keys a $9.00 trifecta”. There are just too many low payouts and with 4 turns and 8 horse fields, how do you fix that?

Bottom line, we use to accept the decision of the judges without much proof. We used to only have Win, Place, Show and Exactas to bet. We used to bet whatever track was located within an evening’s drive because that was the only choice. That is the PAST!

Today we have choices of where and what to gamble on. We do it from our homes because convenience is key. We will pick what gives us the best value and entertainment.

Future… sport betting is here and will grow. How do we become part of the movement? How do we keep people from jumping ship? These are tough questions, but I can tell you the answer is NOT ½ mile racing, with one “low def” camera, offering the same old bets with low payouts and a lack of imagination.
Keep reading HRU… a lot of info of what is wrong and how to improve is written within. I just hope the right eyes are reading.