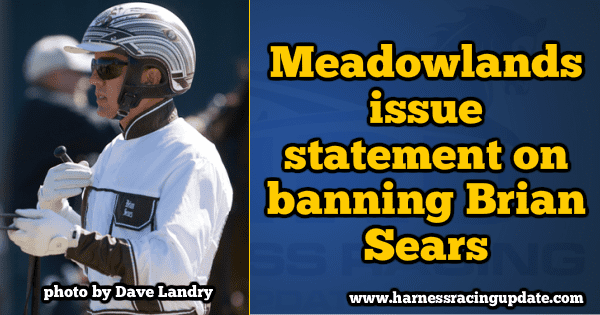 A day after Standardbred Breeders and Owners Association of New Jersey (SBOANJ) president Mark Ford issued a statement saying “we strongly disagree” with the Meadowlands Racetrack’s decision to ban Hall of Famer Brian Sears from driving Crawford Farms Meadowlands Pace entrant Thinkbig Dreambig on Saturday in the eliminations, the track responded with a statement to Harness Racing Update.

It reads as follows:

At the end of last year (track owner) Jeff Gural and (COO) Jason Settlemoir met with all of the drivers that compete regularly at The Meadowlands, including Brian Sears. It was explained to them that if they wanted to drive at Yonkers from Jan through June don’t expect to show up in July to drive horses in our major stakes.

Everyone understood and we made it clear that this rule did not apply to the Levy or Matchmaker or any other stakes races, only to overnights.

Brett Miller, Yannick Gingras and Corey Callahan drove at The Meadowlands over the winter, though not every night, but they did not drive at Yonkers. David Miller and Brian Sears spent the winter in Florida and David began driving at Meadowlands when he came back. Tim Tetrick took the winter off and came back after the Levy.

Sears asked if he could come back after Yonkers closed for 10 days the end of May and he did come back for that weekend’s racing. He then called Jeff and told him he had decided he did not want to be driving on the Grand Circuit and endure all the travel and inconvenience.

Jeff said that was his decision and he understood; assuming this issue would not arise since most trainers of Grand Circuit horses expect their driver to travel around to Canada, Indiana, PA, Ohio and Lexington and not just show up at The Meadowlands.

Truthfully we are surprised this became an issue since Jeff likes Brian, thinks he is a great driver and respects his desire to slow down as evidenced by his decision to take the winter off.

Brian Sears is not a victim here; he advised that as a lifestyle matter he wasn’t looking for what racing on the Grand Circuit requires and we respect that. We appreciate the commitment and rigorous schedule maintained by our drivers who are Grand Circuit drivers.

Up to now the only reason there is racing at The Meadowlands is because Jeff has subsidized the operating losses and overpaid the purse account by millions of dollars. With the help of many sponsors the lights have remained on and the lucrative stakes program in tact.

Seeing the hand writing on the wall with the dramatic decline in entries as evidenced by the fewer races, short fields and lower handle has compelled Jeff along with Mike Gulotta the SBOA of NJ and Dennis Drazin at Monmouth Park to work tirelessly these last few months to convince the state of the importance of horse racing in the state.

Together they have requested that the state restore the $30 million dollar purse subsidy that Gov Christie redirected to AC advising politicians that without that money it would be impossible for The Meadowlands to continue to race when the PA tracks are open and also impossible to maintain the existing stakes schedule, which is what makes Meadowlands the leading harness track in the country if not the world.

Unfortunately the subsidy was not included in the budget passed last week; however Jeff and the others have not given up and hope to have that money added to a supplemental budget which hopefully will happen in the fall.

In the meantime, everyone should enjoy the next five weeks of major stakes and the 2-year-olds racing on Saturday’s Breakfast with the Babies culminating with the richest race of the year, the Hambletonian.

Prior to the statement being released, Sears — who has since been replaced on the Jimmy Takter-trained horse by Jordan Stratton — told Steve Wolf of Harnesslink (full story here) Gural was able to ban him because the Meadowlands Pace is a Meadowlands-owned stakes race.

Ford’s statement, released Wednesday, read, in part, “After speaking with both parties, it is apparent that this is a personal issue. We strongly disagree with the Meadowlands’ decision and the SBOANJ will continue to work toward a resolution.”