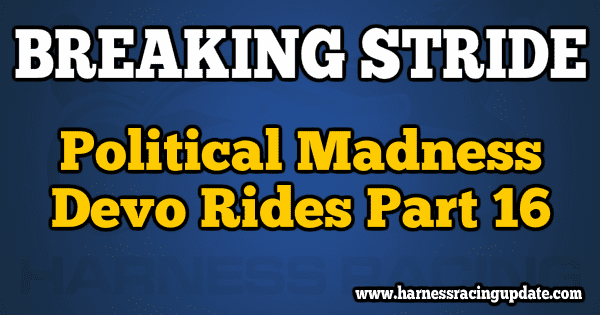 During yesterday’s ride, our conversation struck a nerve. My friend, the high tech mogul, remarked that politics would determine the fate of legal sports gambling and horse racing.

I turned from a respectful listener/chauffer into an unhinged ranter.

I slammed my fist against the Prius steering wheel, “When we hear crap like this in horse racing we never know who has our back or who will stab us in the back. We don’t know which laws are good for us. We care about the odds in the race, we care about getting boxed in, we care about bowed tendons, we care about juiced horses, we care about stakes payments, we care about closing racetracks. How in the hell do we know what goes on behind the curtain? How do we know if we even have people at the table? We don’t even know where the friggin’ table is and…”

I inhaled, exhaled, and spoke slowly, like a drunk trying to sound sober, “I’ve been in this sport for 15 years, as a gambler, owner, and even a breeder. Politics have plagued every step and it never made much sense. People in this sport can get blasted by faceless, nameless people with money and influence.”

I sighed like a steam engine train stopping at the station, “When I started in harness racing in Ohio, we didn’t have casinos and the purse money was peanuts. For shoestring guys like me and my pal, this was hopeless. To have any chance of breaking even, we became harness racing vagabonds. Even though we are native sons of a state with harness racing, tons of history, and tons of fairgrounds, state politics kept us off the home tracks.”

I replied, “Yeah, but it was a long road to get back home and it left scars.”

He smiled and tried to lighten the mood, “Well, at least you had a chance to visit other states.”

“A few, but some I missed. For some weird reason, maybe because I’ve always wanted to get to Chicago, I always had the itch to try Illinois. Every year I brought up the idea of racing there and pushed to give it a try. Thank goodness my horse partner talked me off that ledge. Illinois may be the crown jewel of wacky politics. Every year was worse for harness racing, every year for horsepeople was – Next year for sure. Those poor Illinois horseracing folks went for a rough ride in the political arena.”

“So you missed Illinois, then what.”

I answered, “Pennsylvania for a few good years. Then six or seven years ago, we decided to breed and race in Canada. We had a couple of promising broodmares. On a fishing vacation, I found a cool little racetrack in Canada. We loved a couple of Candian sires. They had something named the Slots At Racetracks Program that was awesome. We made some calls, lined up some people. We were excited to try our luck up north.”

“And, like a day before we are ready to pull the trigger, seriously a day, I read an article on the Internet that the Canadian program might get torpedoed. The drift of the article was that some funny business was going down behind the scenes. We got cold feet reading reports and we stopped the ball rolling.

I continued, “We dodged a bullet. The political forces, whatever they are in Canada, gutted a program where everyone seemed happy and prosperous. I’m not sure anyone really knows how or who, or why. Canadians who were in the horse racing game were not able to dodge that bullet. It was a bloodbath. From what I saw, Canadian horse fans and people in the booming horse racing business were sucker-punched by people behind the curtain.”

“I see you feel passionate about politics.”

“The thing is, I’m not a political guy. I never watch screamers on Fox News or CNN for all the infotainment and mud fights, and mind twisting. Believe it or not, I believe in common sense and not listening to anybody, which leads me to my next debacle.”

I nodded, “So I looked at New Jersey. I try to be logical. A guy builds a new, beautiful racetrack, a smart guy who loves the sport. They already have slot machines in New Jersey. The new racetrack is a standing cash cow waiting to be milked. It’s surrounded by casinos in other states that are leeching New Jersey money.

I convince my partner, “I can’t see how the racetracks in New Jersey do not get a huge windfall. This will be like early Apple stock, and we can catch the wave early. When New Jersey gets rolling, we are on the ground floor!”

“I still can’t get my head around it. Taking our New Jersey harness lap was not pretty. I still can’t see how people did not see some public money, how they did not see tracks and farms getting help. I don’t know how citizens did not see a good thing, and how politicians could tell them Atlantic City is where it’s happening. Something feels fishy.”

He smiled, “Politicians face huge pressures. Maintaining honesty and logic is harder today than it ever has been.”

“It isn’t just the politicians, they are just what we see. I have sympathy for some of them. For regular schmucks like me in racing, almost everything takes place behind the curtain and we just wait for word of the next act. That’s why your talk about ‘National Gambling Legislation’ sounds like gibberish to mortals. Politicians who run on the idea of collecting public money from legal gambling sounds like nonsense.”

We rode for a while, and then he said, “You’re right to feel like a pawn in the game. I can’t argue with you. Big pockets pull strings. But I can tell you this, democracy is still the best game in the world; there are people with clean hands who can break through the clutter. If someone runs on a platform of corralling the money from online gambling, voters will listen. Moreover, and keep this to yourself, tech companies will be their allies.”

I pulled a can of Diet Coke from the cup holder between our seats, took a swig and complained, “Maybe you’re right, but it’s frustrating. For example, now that state betting shops at racetracks are legal, we have no idea if people who love horse racing are behind the curtain. Are they casino people? Are they foreign conglomerates? Are they friends or foes of horse racing? Are these people just using racing? To us in harness racing, heck, for a lot of things, we feel like we just have to swallow what they push on the stage.”

He sighed and said, “Tirades feel good, but they don’t DO anything.”

I growled, “That’s the problem, what do we do? Give me a concrete plan to hang our hopes on.”

He took a long time to answer, a very long time, and then said, “Let’s operate on the premise that a gambling revolution will take place and Federal legislation is the future.”

I asked, “You sure about that?”

“Yes. I’ll give you my reasoning another time, but even if I wasn’t confident in the national model, planning has to be proactive. Let’s go forward based on that premise.”

“Each racing state, each horse racing breed, must elect representatives. Create a group of smart people, young and old, business savvy, in racing, in lobbying, in technology, forward-looking — with horse racing interests in mind. This bloc should focus on getting to the table and forming strategies for a Federal gambling landscape. This gives you representatives free from state self-interests that can speak in one voice, bringing power and votes.”

I grumbled, “That sounds like politics. Who pays these representatives?”

He barked, “It’s a person or two, from each state! Look, no process is perfect, but a motivated group focused on National Legislation is a start. This offers horse racing a plan, but you have to get there early, you can’t wait for the laws to be written and voted on — and then get in the game. At least it could give horse racing people oars in the same boat pulling towards one goal.”

He stopped me in mid-sentence and fired with surprising force, “Don’t tell me what happened before, don’t tell about me self-interest, don’t tell me about obstacles. You just said you don’t know what goes on behind the scenes in horse racing. The past is irrelevant. If you want a future, horse racing must find people to open the curtain and find a seat at the national table.”

I held up the palm of my left hand as a stop sign, “Wow, I thought you nerds were always calm and controlled.”

He had a sheepish grin, “Not always. My nickname in the tech valley is ‘Excitable Boy,’ after the Zevon song.”