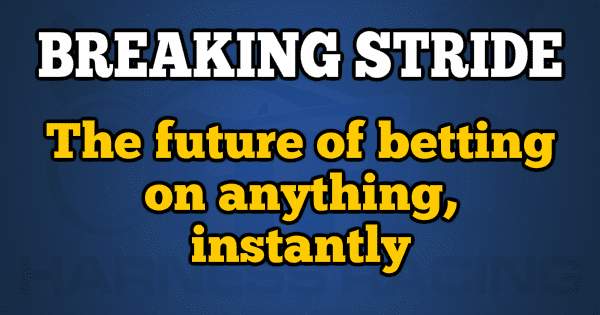 Driving to the private airport for his short return trip to Silicon Valley I asked my passenger, “Ever meet Bill Gates or Steve Jobs?”

He said, “Jobs once, Gates a few times.”

“Just people, not mythical creatures. They were both born in 1955, a decade older than me. I got to the party in ’86. I’m just a kid from Ohio who happened to get hooked on writing code.”

“Quite a party, changed the world.”

“Never saw it coming. Like most people, I don’t have the vision to look down the road. Most of us live in the moment and stay in the moment. We feel as if we can’t do anything about the future, except let it happen.”

“Sure, politics, economics, whatever, the future never seems real. Then bang, here it is. Did you know 10 years ago nobody had a smartphone. Try to get your mind around that concept.”

I said, “I’ve asked people I know in horse racing about PAPSA, the big court thing around the corner. They never heard of it; one guy thought it was an STD, another thought it was a racing supplement. That’s the problem with our talks about horse racing and gambling. People worry about today, about paying the bills, about the next race, about the next sale. Who really has time for the future? Who can DO anything about it?”

“We can, and I believe we will. Trey, don’t tell anyone, but gambling has a great deal of promise for cloud computing and data gathering businesses like mine. I see five, maybe six groups asking deep questions”

“Because of the money.”

“And power. Try this exercise. Instead of looking forward into the future, create a specific day in the future, step into that day, and work backward. Mentally cement this day in your brain as reality.”

“Should I close my eyes?”

“Not while you’re driving.”

He slipped into teaching mode and the next few minutes were part Audiobook and part Ted Talk.

“Imagine this scene in the living room of Roger, a 30-year-old follower of sports. It is 2024, just a blink of an eye away. For Roger and many of his friends, viewing sports remains extremely popular, more popular than ever. Roger settles down for an evening of sports viewing. Roger speaks into his device, or more likely, a chip embedded behind his ear.”

Roger asks, “Who are the Cubs playing tonight, when does it start, and what will I win if I bet $10 on the Cubs?”

The Artificial Intelligence device replies, “The Chicago Cubs are playing the Milwaukee Brewers. The first pitch is in 58 minutes and at this time, a $10 wager will pay $18.60 dollars and sixty cents if the Cubs win.”

“The tone will confirm your wager of $10 on the Chicago Cubs to win tonight’s game. Ding.”

“What time is the next race at Pompano Park harness racetrack today?”

“The post time for the sixth race is in 12 minutes.”

“Who is the favorite and what is the payoff?”

“Wager $2 on the six, show this race on all devices, and notify me one minute before the race begins.”

“Your wager is official. Ding. The horse race will display on all devices and the race begins in 11 minutes and 10 seconds. I will remind you one minute before the race.”

My tech pal came back from the future and asked me, “Now Trey, does that seem realistic to you?”

Grudgingly I said, “Well, yes, I can see that happening. The voice in his head is just a tricked up smartphone. But I don’t WANT it to happen. Roger talking to himself and artificial intelligence in his ear takes the charm out of the ballgame and the horse race.”

“Go back to the vision of Roger and his baseball and horse racing wagers. Imagine the amounts of money that will flow through the portal of an Amazon, or Google, or Facebook or my company, replenishable revenue that only requires we handle data and transactions and payment of a small fee to Major League baseball or horse racing. Those numbers would be staggering, almost unbelievable.”

I spoke slowly, “All of my life people like me have watched sports, practically anything sports, with no real reason except maybe they were my home team. It would be almost impossible for people like me to NOT wager a few dollars to make those games more important, to push our interest in the games to a higher level.”

He nodded, “These casual gamblers would be a new audience, not the mesmerized slot machine players or the hardcore handicappers, but everymen and everywomen who just want to add a little spice to their games.”

I drove and watched a cookie-cut housing development slide past my side window. I imagined every house, every sports fan in every state placing a few dollars on sporting events and began to see the ramifications.

He interrupted my thoughts, “My company plays chess. We try to look many moves down the road, we play the long game. We can afford to play the long game, while racetracks and other sports, even major sports, play what is in front of them trying to make money by advertising or pari-mutuel wagering or box office receipts or anything that pays.”

“So give me long moves, how do you see getting to the place where gambling on horse racing and other sports is your business.”

He looked out the window at passing fields and said, “Well, the first step will be what we have been talking about. New Jersey opens the door to gambling legislation. Now let me ask you, What is next step?”

I had this answer, “You already told me, a bunch of states follow New Jersey and offer legal sports gambling at racetracks, ADW’s and casinos.”

“See Trey, you are already in the predicting business. Now keep going. Money from sports gambling is on the table. More and more states get into the sports gambling game. What do you think will happen next?”

I think for a few seconds and my answer is more of a question, “Every state milks those cows, they start taking sports wagers online?”

His voice rises, “Of course. Now here is where you may struggle. Imagine that every state has legal online wagering. The amount of money is insane, states begin to poach each other, wagering gets out of control, regulation is all over the map, and state boundaries blur. This turns into the wild west and a real mess.”

We reach the airport. I pull to the curb. He jumps out and sticks his head into the passenger window and continues, “We are about half-way into our six-year look into the future of sports gambling. At this point, it is a crazy time with new parties jockeying to cash in and corner markets. Chaos reigns, sports gambling is a Pandora’s box where taxable money is escaping and rules are flaunted.”

I cut into his mini-rant, “Jeesh, tech-man, calm down. You make it sound like a science-fiction movie.”

“Ah, Trey. Remember the words of the great Yoda, ‘Difficult to see. Always in motion is the future.’”

I flip him a thumbs up and say, “So now the future of my favorite sport, of gambling, of the economy, depends on a Star Wars scriptwriter.”

He smiles, “Life can be stranger than fiction. Next week when you fetch me, we’ll look at how the impending gambling mess may be cleaned up. Better still, how I think it will be averted. We will keep walking up the steps that lead to the year 2024 and Roger’s living room. We will find a seat for your favorite sport.”