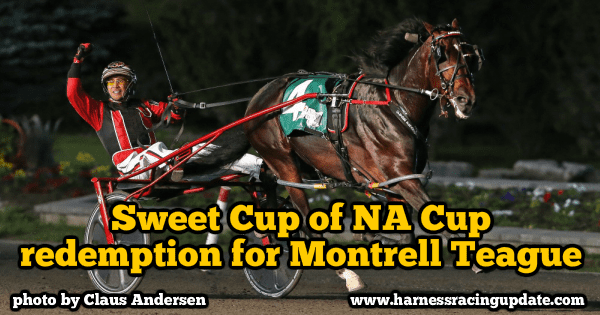 Despite waiting three years for a Pepsi North America Cup do-over, driver Montrell Teague was calm, cool and collected as he drove Lather Up to victory Saturday in the 35th edition of the $1 million event at Woodbine Mohawk Park.

For three years Montrell Teague has wanted a do-over in the Pepsi North America Cup.

Saturday, the 27-year-old driver made good on that second chance piloting 4-5 favorite Lather Up to a three-and-three-quarter-length victory over Done Well in the $1 million final at Woodbine Mohawk Park in a career best 1:48.1.

In the 2015 NA Cup won by Wakizashi Hanover, Teague finished second by three-quarters of a length with the favorite, Wiggle It Jiggleit, who went on to be the U.S. Horse of the Year that season.

“I’ve been holding this over my head for so long, just because it’s one of the biggest races that I can be in and you only get so many opportunities,” Teague said. “You have to take advantage of them. The first time I didn’t. I kind of got riled up in the moment, but this time I learned from that and made it work.”

Lather Up, trained by Clyde Francis, fired from post-four to the early lead, but was overtaken at the opening-quarter (:26.3) by Done Well and driver Tim Tetrick. Teague wasted little time retaking the lead in the second-quarter and had his charge showing the way through a :54.1 opening-half.

“I definitely wanted to retake,” said Teague. “(Tetrick) could have went on and taken a bigger fraction for the half but I was trying to go back to the front and back the half down as much as I could.”

“I thought more were going to leave and I’d have to duck in there and then come first-up or second-over,” he said, “but I got my way on the front and got to dictate the fractions and it worked out.”

Teague’s proud father, George Teague, said he, “absolutely loved it” when Montrell retook the lead. “I knew it was the move to make. He deserves a lot of credit.”

Francis also thought it was the winning move.

“When he moved him back to the front, I thought he had a good shot,” Francis said. “He wasn’t going to get blocked in. Most times, you worry about getting blocked in, somebody pulls early on you, especially in a race like that, but (Lather Up) was on his game tonight.”

Tim Tetrick, driver of runner-up Done Well, said he got “a great trip. I thought I gave (Lather Up) a run, but Teague’s horse was on his game today. That’s a nice colt. He paced right away from mine, but luckily enough I could hold on to second… I thought I was in a good spot. I got in a good spot without using (Done Well) too much and I knew I was following a good horse. Montrell kept it rolling and I just couldn’t keep up with him, but my horse was second best.”

Lost In Time, driven by Scott Zeron, was seventh at the top of the stretched, but closed extremely well to finish third, just a quarter-length behind Done Well.

“I felt like he’s always been a great horse, but the fact is that we weren’t progressing his last few starts and it was somewhat of a worry,” Zeron said. “(But tonight) that was an extremely impressive last quarter.”

As for Montrell, the first thing he said to his father in the winner’s circle was, “Happy Father’s Day.”

“I’ve been fortunate enough to win a few of these big races, and I can honestly tell you that (Montrell) brings a different dimension to me, making me want to stay in the game a little longer,” George said. “Some days you get a little tired of the BS with it, but as long as I can provide this kind of opportunity for him… because opportunities ain’t given to him… it makes me want to play the game a little longer.”

The victory was also sweet redemption for trainer Francis, who also conditions Wiggle It Jiggleit.

“It’s not often you get the chance to have horses of this calibre to get into these type of races. Now, to do it last time and back again this year, it’s great,” Francis said.

Though it was the first NA Cup victory for Francis and Montrell, it was the second triumph for the Teague family who won the 2006 Cup with Total Truth trained by George’s sister, Brenda Teague, and driven to victory by Hall of Famer and two-time NA Cup winner Ron Piece.

Lather Up, a homebred son of I’m Gorgeous out of Pocket Comb, is owned by Gary and Barbara Iles of Harrington, DE. With the victory, Lather Up ran his 2018 undefeated streak to six races and increased his bankroll on the year to $578,165. Lifetime, the colt has won 10 of 13 races and $652,265.

“I’ve been breeding horses for a lot of years now,” Gary said. “I was here 10 years ago and I watched horses race… I didn’t make it to the finals or anything, but it’s a great feeling to be here and know that you not only get to participate, but end up winning it — it’s sensational.”

Francis said he always knew Lather Up had talent, but the colt was plagued with problems at two.

“When we first broke him, I went on the track with him and I told Montrell, who went with the babies, they he could go a little bit. He trained down like that, but we just had problems with him steering. That was the big problem,” Francis said. “Last year, he won three out of four races in Ohio in the Sires Stakes program and then he had a reaction from some antibiotics. Then, he came back and was still having the same issues with steering, locking up on the line real bad. If you got him where you could steer, he wasn’t back to steer. We finally got over that. Like I said before, he’d just grab one line. If one get on the line like that and you pull him, it’ll slow him down. You can’t let him really pace.”

Gary said he was hopeful Lather Up would be a good horse if they got his problems straightened out.

“One thing that George noticed in this horse, almost immediately, was how smart he was and he said, ‘You know you can breed speed but you can’t put those brains in a horse’s head. When you can’t do anything you want with them it makes it much more difficult,’ and he has been just sensational, as you witnessed tonight.”

Gary said Lather Up is the best horse he’s ever owned, but another in the family came close.

“It was a full brother to his mother, Crew Cut Zach (In The Pocket–Shampoo Girl), it made over a million dollars, however he did it over a 10- year period where we didn’t do any staking with him. He was a nice horse, but the talent was in the family,” Gary said.

Despite NA Cup 35 being billed as a wide-open race, Francis still believed Lather Up was a deserving favorite.

“Like with Wiggle It Jiggleit, we clearly thought we were the best and didn’t think there was anything that could beat him, but, you know, that’s horse racing and you never know what can happen in the race.”

Montrell said he was equally confident going into the race. “He’s been great the last four times. I was very happy with him, earplugs still in and strong through the bit. I think I saved those moments for this race,” the driver said.

Despite the impressive victory, George Teague wants people to know Lather Up is “a different horse than Wiggle It Jiggleit. The fanfare of Wiggle It Jiggleit, he was undefeated with 15 starts by now. (Lather Up) just got started with five starts and, last year, he got sick at a bad time. He was on the right line a couple of times he lost, but he’s a great horse.”

Meanwhile, the NA Cup victory may well put Lather Up’s sire, I’m Gorgeous, back into commercial stud duty at the end of the year. I’m Gorgeous is currently racing in Ohio at age 11 (full story here).

I’m Gorgeous formerly stood at Sugar Valley Farm in Ohio, but was eventually sold when he didn’t draw enough interest. Sugar Valley also had something of a redeeming night Saturday. Not only did Lather Up win the NA Cup, but second-place Done Well is a son of Well Said that stands at the farm. Also, Goodtimes winner Wolfgang is a son of My MVP, also a Sugar Valley Farm stud.