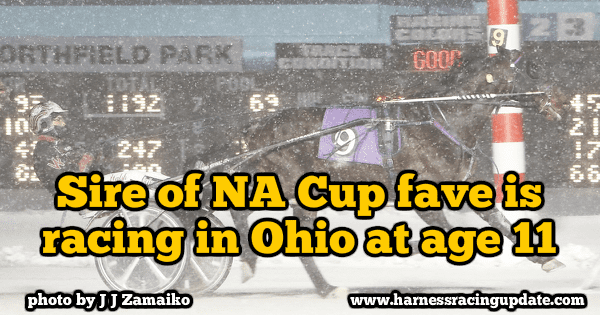 Sire of NA Cup probable fave is Gorgeous, but unloved

I’m Gorgeous didn’t draw enough interest to continue to stand as a commercial stallion and is currently racing in Ohio at age 11. A win Saturday by his son Lather Up in the $1 million race at Woodbine Mohawk Park would go a long way to restarting I’m Gorgeous’ stallion career.

As the field lines up for Saturday’s $1 million Pepsi North America Cup at Woodbine Mohawk Park, the post time favorite may be a lightly-raced Ohio-bred colt named Lather Up. Just 223 miles away at the Ashtabula County Fairgrounds in Jefferson, OH, Lather Up’s sire, the 11-year-old I’m Gorgeous, is being prepped for an overnight event on Tuesday night at Northfield Park.

As a racehorse, I’m Gorgeous won four of eight starts as a freshman, including victories in the Tompkins Geers, New York Sire Stakes, and an elimination of the Woodrow Wilson, where he established a freshman record of 1:50.4.

As a three-year-old, he won eliminations of the Cane Pace and the Little Brown Jug, finishing second to Rock N Roll Heaven in the Jug final for owners George Teague Jr. and Elmer Fannin.

After a successful four-year racing career, stud duty seemed a certainty for I’m Gorgeous. The bay son of Bettor’s Delight out of the $536,237-earning mare, Joy, found himself at the newly rejuvenated Sugar Valley Farm to start the 2012 breeding season.

“I would still be standing him, but he wasn’t getting any support. I always had faith in him because his mother (Joy) was probably the best Andrel mare ever. It was a unique cross (with Bettor’s Delight), so you could breed him to just about anything,” said Joe McLead, co-owner of the Delaware, OH nursery.

“Financially, there was no way to keep him as a commercial breeder, so we decided to sell him. We thought the person who bought him would stand him at stud.”

But to the surprise of McLead, he was put back into training and took a qualifying mark of 2:02.2 at Monticello Raceway, late in 2016.

I’m Gorgeous showed his durability in 2017 with 42 seasonal starts, despite that fact that he didn’t wear a harness for nearly five years. He bankrolled almost $45,000 for his connections, racing mostly in claiming and conditioned events in New York and Ohio.

I’m Gorgeous was slated to be hip number #956 in the 2017 Blooded Horse Sale’s Fall Speed Sale, but was made an “Out” when he was purchased privately by Jeffrey Stacy of Cedar Bluff, VA. Stacy turned the stallion over to the 29-year-old Cory Deyermand to train.

“We bought him with the intention of racing him this year and breeding him next year,” said Deyermand. “I have a filly out him that was a top Ohio Sire Stake horse (Gorgeous Road), so I was familiar with him as a sire.”

“He is racing okay this season. He’s a pretty tough luck horse as far as racing. He has paced in (1):54 in nearly every start and only made $6,500,” said Deyermand.

“He’s a sweetheart to be around. You never would know he was a stud. He likes his work and he trains hard. He’s a pleasure to be around.”

“We are fairly certain that it is still the plan (to stand I’m Gorgeous at year’s end). Jeff stood Powerful Toy in Ohio and he recently died (on June 4). As fate would have it, I’m Gorgeous could step in and take his place,” said Deyermand.

With his most famous son going for fame in Canada Saturday night, Stacy and Deyermand will be watching the action closely.

“We definitely will be cheering on Lather Up. A win would be good for us obviously.”