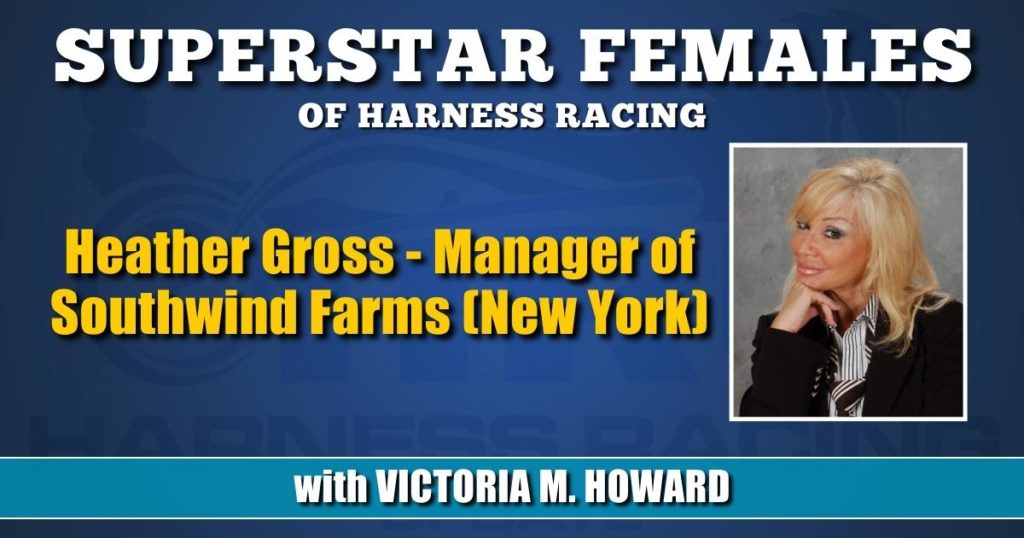 Heather Gross, the manager of Southwind Farms in New York is living the dream many of us would die for.

Imagine waking up every day and go to work and being around one of God’s greatest creations — the horse!

Gross grew up in the small town of Wells Bridge, located in upstate New York.

“Don’t blink, you might just miss it as you’re passing through,” she said.

As a child Gross was surrounded by lots of cows and horses on her family farm.

“I am the first in a long line of farmers to get involved in harness racing. While the cows outnumbered the horses, I spent every minute I could with the horses.

“During my younger years, I rode and showed quarter horses and proudly have the ribbons to show for it.

“In 2009, I applied for a part-time job position at Southwind Farms in New York. I started out as a farm hand, which allowed me to learn the business while helping to support myself through college.

“It didn’t take long before my interest was quickly ignited in the standardbred industry.

“I have been extremely fortunate to find a long-term home here at Southwind Farms. In 2009, I started out working in the stalls and worked my way up to the position I presently hold which is manager in the exact facility.”

The New York facility is a beautiful 400-acre farm in the rolling hills of Gilbertsville. The facility includes 60 stalls between three barns, as well as numerous buildings, for hay and straw storage.

“A typical day at the farm will include mare and foal care, feed and watering, stall cleaning and typical farm maintenance.

“Breeding season is quite busy with the addition of tracking cycles and breeding.

“If you are familiar with the weather in upstate New York, you know the demands of the blustery winters here. Many days start very early plowing — necessary to access all of the property to continue daily chores.

“During the summer time, things move from breeding responsibility to hay and facility maintenance. As you can imagine, within the 400 acres, once you begin cutting and baling hay it doesn’t end until the snow falls.

“Each year, here in New York, we manage broodmares; including Southwind mares, as well as client mares.

“At both of the Southwind facilities we have extensive staff resources to aid through the foaling season. This helps significantly in the health and welfare of a new-born foal. The first 24 hours in a foal’s life are the most crucial and lots of attention and personal ‘one-on-one’ care goes into the first hours.

“As the year progresses, foals transition from barns to pastures and eventually go out on their own. Once foals are weaned, weanlings are moved to the New Jersey facility, allowing for clients to view the yearlings in one central location.”

Currently, there are no stallions standing in the New York facility, but the impressive roster of stallions at the Jersey location include: Muscle Hill, Walner, Tactical Landing and the new kid in town — Ecurie D.

“At Southwind Farms in New York we have 50 horses throughout the season; including mares, foals, as well as some beautiful and happy retirees.”

Gross admits to not having one particular horse as her favorite for they are all special in their own unique way.

“Foals develop personalities at such a young age. Some are bold and outgoing; some love to run and play, while others may be a little more timid; but all of the retirees hold a special place in my heart.

“As far as the stallions, they each have their own special personality, but Muscle Hill is truly one of the smartest horses I have ever had the pleasure to work with.”

A final word from this issue’s superstar:

“The equine industry can be tough. Beyond those tall wooden fences, green pastures, and rows of beautiful barns is a totally different world.

“There are countless hours of hard work put into the beautiful standardbreds you see grazing in the pastures.

“For most of the year, the workload never seems to end, but thankfully, eventually it starts to slow down.

“Those long nights of intermittent two-hour naps between foal checks turn into long days of cutting and stacking hay and straw, fences get painted, barns get washed and shrubs get pruned.

“The equine industry is much more than just a career, it becomes a way of life. It takes a team, both on and off the farm, to raise a healthy horse and a successful business.

“I consider myself blessed and am grateful for having this opportunity. But a word of advice for anyone considering getting into this crazy, but wonderful world of standardbreds: always have a few snacks on hand for you never know when you might get a few minutes’ break.”