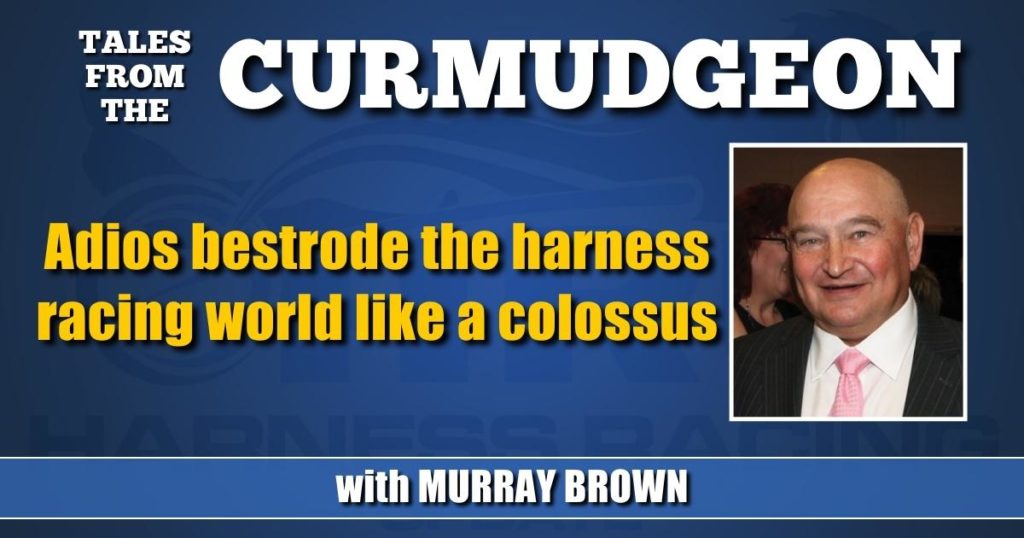 Adios bestrode the harness racing world like a colossus

In a 1962 profile of the great horse Adios in Sports illustrated the stallion was describe thusly:

“To his extreme admirers, however this 22 year patriarch is the mightiest father of all mammals past or present.”

It adds two quotes from the great harness writer, student of bloodlines and of harness history, James C. Harrison:

“I would throw in all fish and birds in addition to mammals.

“I know of no male of any species who has dominated his field the way Adios has in harness racing. He gets champions out of any mares, by any stallions from any bloodlines.”

Is that statement accurate today? Indeed it is to this student of harness racing and the bloodlines of its participants. In relative terms, we have never known a stallion the like of the mighty Adios.

There was a time where the accomplishments of horses were judged mostly, but not entirely by time. In Adios’ era the specifics of time were judged mostly by the number of 2:00 performers sired by a particular stallion. In this area, Adios stood all alone, not only in the number of 2:00 performers sired by him but in money earned by his progeny. Consider this:

Adios led the money earnings list by stallions for eight consecutive years. In doing so he even led all thoroughbred stallions for two of them.

Adios accumulated 10 years where his progeny’s earnings were over TWICE that of his nearest competition, the trotting stallions Hoot Mon and Rodney.

In his era, the richest race for 3-year-old pacers was the Messenger. Adios dominated it like no other sire ever. His progeny captured five of the seven Messengers to which they were eligible and finished 1-2-3 in two of them.

In the same era, the most prestigious race for 3-year-old pacers, one might say all pacers, was the Little Brown Jug. Adios sons won eight of the 11 Jugs to which they were eligible.

One might ask how did Adios attain the enormous success that he achieved? Here is an outline of his career:

Adios was bred by Leo C MacNamara at his Two Gaits Farm in Carmel, IN. He was sold as a yearling for $2,000 to Thomas Thomas of Cleveland, OH. At the time, that was the highest price ever for a pacing yearling.

It was under Mr. Thomas’ ownership that the horse raced at 2, 3, 4 and 5. His original trainer was Rupe Parker who raced him at 2 and 3. When Mr. Parker became ill, he was transferred to the stewardship of Frank Ervin*** who was his trainer for the rest of his racing career. He raced only twice at 5, once each at Goshen and Lexington, because Mr. Ervin was unable to get races for him.

At the conclusion of his 5-year-old season, Adios was sold to the partnership of Harry Warner, of Warner Brothers picture fame and L.K. Shapiro, one of the founders of the harness meeting at Hollywood Park. He raced only three times for the partnership, winning two of those. He was trained at 7 and 8, but did not race. During his lifetime, Adios raced 88 times, winning 44 times and earning only $33,329. Adios raced during the World War Two years when harness racing was anything but a high priority and purses, especially for pacers, were minimal.

While in California, he was bred to a few very ordinary mares. From those matings he produced Prince Adios a noted free-for-all performer with whom he had his first 2:00 performer, the first of many to come.

It was at the end of his 8-year-old season that he was consigned to the Tattersalls Sale in Lexington, KY where he was purchased by Delvin Glenn Miller for $21,000. In attendance at ringside at that sale was one Lawrence B. Sheppard of Hanover Shoe Farms who several years later was to purchase Adios from Miller for $500,000, the highest price for a standardbred ever. At the time, Mr. Sheppard had no interest in the horse feeling that he had been “buried and forgotten” while he was out in California.

It was under Miller’s management at his Meadow Lands Farm that Adios was to carve out a path never before or since achieved by any other stallion.

Miller had in effect been “tapped out” in his purchase of Adios. He didn’t have the funds to give his horse the necessary impetus needed to get a good start in the stud. He bought several mares for his prized stallion — providing that they were priced at $1,000 or less. Among these were such as Shy Ann, Maggie Counsel and Betty G — mares that were destined to become all-time leading matrons in the sport. In retrospect, one might wonder whether the mares were that good or were they that good because they had foals by Adios?

He cajoled most anybody he knew to breed to his new stallion. He entered into lease deals to get mares to the horse’s book. During the course of the horse’s entire career, he only had a crop of more than 50 foals one time and that crop numbered only 51. He was only once bred to as many as 70 mares. He began residency at Meadow Lands standing at a stud fee of $300. At the time of his last breeding season, he stood at a monumental fee of $12,500 — providing you could get in.

From the beginning, champion after champion ensued. First, there was the great free-for-all mare Dotties Pick, then the first 2:00 2-year-old pacer, the filly Adios Betty, the first 2:00 2-year-old colt Adios Boy, then his first of eight Jug winners the world champion Adios Harry, the incredibly fast Adios Butler, followed by the great free-legged filly Countess Adios, and in his later years such as the great Bret Hanover, his sister Bonjour Hanover, the 2-year-old world champion Bullet Hanover and also such as Shadow Wave, Muncy Hanover, Henry T Adios, Adios Vic, Lehigh Hanover and Dancer Hanover.

Most amazing to these eyes is the fact that among the mares that got him to his renowned status were several by such non household names as Bert Abbe, Bonnycastle, Cardinal Prince, Chief Counsel, Cold Cash, Direct Brewer, Direct Rhythm, Dominion Grattan, Ensign Hanover, Favonian, Follow Up, Gay Song, Jimmy Creed, John Dillard, McIWin, Palachuck, Raider, Silent Grattan and Wilmington from all of whom he produced 2:00 pacers. There is no doubt that he did his best work with well-known stallions such as Billy Direct, Nibble Hanover, Volomite and in his later years Tar Heel. But it was those rather nondescript mares that earned him the matings to those blue blooded mares.

Of course it is difficult to compare a stallion to the sires of today who seem to produce horses who go sub-1:49 with some frequency. But none of these horses — even the likes of Always B Miki, Captaintreacherous, Sweet Lou and others — have come close to dominating the way that Adios did. To quote the great Shakespeare “He bestrode the world like a colossus.”

*** Although Frank Ervin trained Adios for the greatest part of his career, he was not a great admirer of the horse. He recognized that he was a great looking horse with high speed, but he doubted his grit as a racehorse. He was known to referring to him as a “sulking sonovabitch.” He really did not think that much of the promise of Adios as a sire — to the point where he never bred to the horse, nor did he ever buy a yearling by him. Bret Hanover, arguably the greatest horse sired by Adios and maybe Mr. Ervin’s greatest pacer was neither chosen nor bought as a yearling by Mr. Ervin. He was purchased as the highest price yearling at $50,000 from the 1963 Hanover yearling consignment by his owner-to-be Richard Downing. To this author’s knowledge, he was the only horse by Adios that Frank Ervin ever trained.