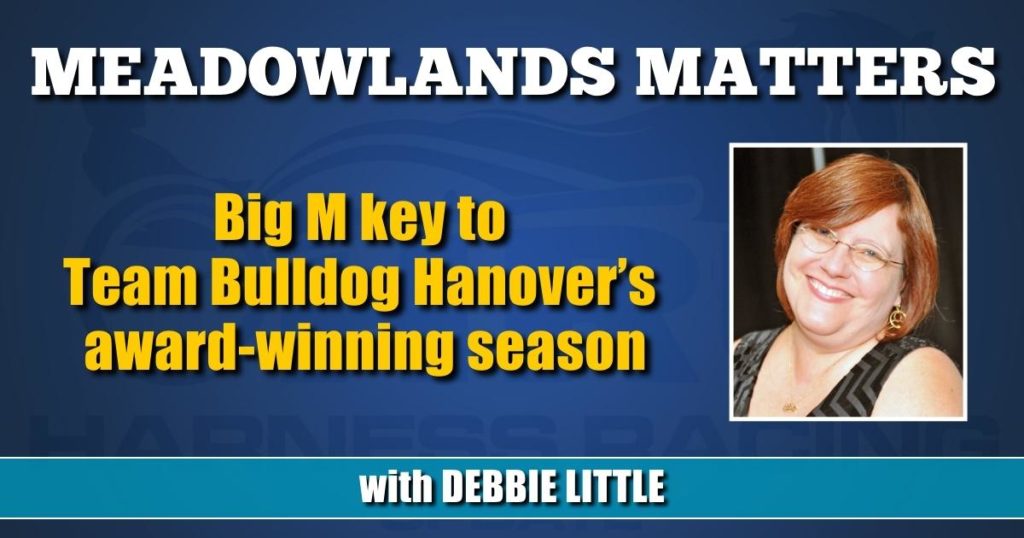 The Bulldog Hanover group has already garnered the Bergstein Proximity, Good Guy, Owner of the Year and Driver of the Year awards, with more to come.

Racing at The Meadowlands matters.

You didn’t need to race at The Meadowlands to garner divisional honors. But it sure helped those that did.

The Big M was the perfect venue for both the presumptive Pacer and Trotter of the Year, Bulldog Hanover and Bella Bellini, respectively, to showcase their talent.

Although Bulldog Hanover only competed at the East Rutherford, NJ mile oval a total of five times, winning them all, they were less than a third of his starts and only slightly over a third of his total wins for the season.

But it was the four-week stretch from June 25 to July 16, perhaps the most impressive ever in harness racing history, that pushed him to the top.

Driver Dexter Dunn had never sat behind Bulldog prior to that magical streak, so he couldn’t have anticipated what was to come or how hard it would be to pull his horse up after the wire.

“I had no idea he was going to be able to do that, four starts in a row, four weeks in a row and put up the times he did,” said Dunn. “It was a surprise that he could do it, but when you sat behind him, he gave you the confidence that he could.

“With the times he was [posting], usually after a mile that fast it would be pretty easy to be pulled up because they’re pretty tired, but not him. He was a character. He wanted to go around again. It’s amazing how good the horse was and how big a set of lungs he obviously had.”

As if being recognized as the fastest harness horse in history wasn’t enough, Bulldog and his connections continue to rack up the accolades even before the Dan Patch divisional honors are announced.

Bulldog was recently named the Bergstein Proximity award winner, the highest honor bestowed by the U.S. Harness Writers Association (USHWA) solely voted on by them, while his owners, Jack Darling and Brad Grant, were chosen as recipients of the Haughton Good Guy award and Woolworth Owner of the Year award, respectively.

Dunn won USHWA’s Driver of the Year award for a fourth straight year, something that has not been done since the award changed from being statistically based as the top dash-winning driver and money-winning driver into a singular winner chosen by popular vote, beginning in 2003. The best any driver has done prior to Dunn in the nearly two decades was win back-to-back honors.

Bulldog Hanover was not the only top horse that contributed to Dunn’s impressive 2022, as the aforementioned Bella Bellini certainly played her part.

Most of Bella’s starts, 13 of 19, took place at The Meadowlands, and included seven of her nine wins.

“She had such a good year last year [in 2021] and it was so great that they brought her back,” said Dunn. “It’s never easy for a 4-year-old mare to come and race against the open horses, but she was just amazing.”

It’s easy to say that without The Meadowlands, Bella would have retired and not raced in 2022, since it was Meadowlands’ president/chief executive officer Jeff Gural who helped convince Bella’s owner Dave McDuffee, following the 2021 TVG Mares Trot, to bring her back.

In a previous Meadowlands Matters column that appeared in the Feb. 4 edition of HRU, McDuffee explained that encounter with Gural:

“Jeff Gural had spoken to me right after that race and said to me we’re going to have a 4-year-old [Graduate] division for fillies next year with more money,” said McDuffee. “I said, ‘You know what Jeff? I’m probably going to change my mind and I think we’ll probably race her.’”

That decision was a winning one for McDuffee, Bella, and most of all, the fans.

“I was pretty lucky to get to drive horses like those two,” said Dunn. “It was a really fun year with both of them start to finish really, so it was good.”

Until that time, speculations will abound as to whether Bella will be Trotter of the Year and if Bulldog will become Horse of the Year by a unanimous vote.

While nothing is certain until the envelopes are opened and the winners are read, in the final edition of the Hambletonian Society/Breeders Crown poll, Bulldog Hanover and Bella Bellini were ranked Nos. 1 and 2, respectively.

Although final poll rankings do not determine Pacer, Trotter or Horse of the Year, in recent years, they have been a good indicator.

Not since 2016 has a horse been honored as Pacer or Trotter of the Year without leading that gait in the poll.

As for Dunn, you have to go back exactly a decade to find the last time that the Pacer and Trotter of the Year had the same pilot, which was Captaintreacherous and Chapter Seven with Tim Tetrick, who was the 2012 Driver of the Year.

“There’s tough competition out there, so it’s a real honor to receive that award,” said Dunn.

There will be no live racing at The Meadowlands on Dec. 23-24 for the Christmas holiday. Live racing resumes Friday, Dec. 30 and there will be fireworks following the Saturday, Dec. 31 New Year’s Eve card.