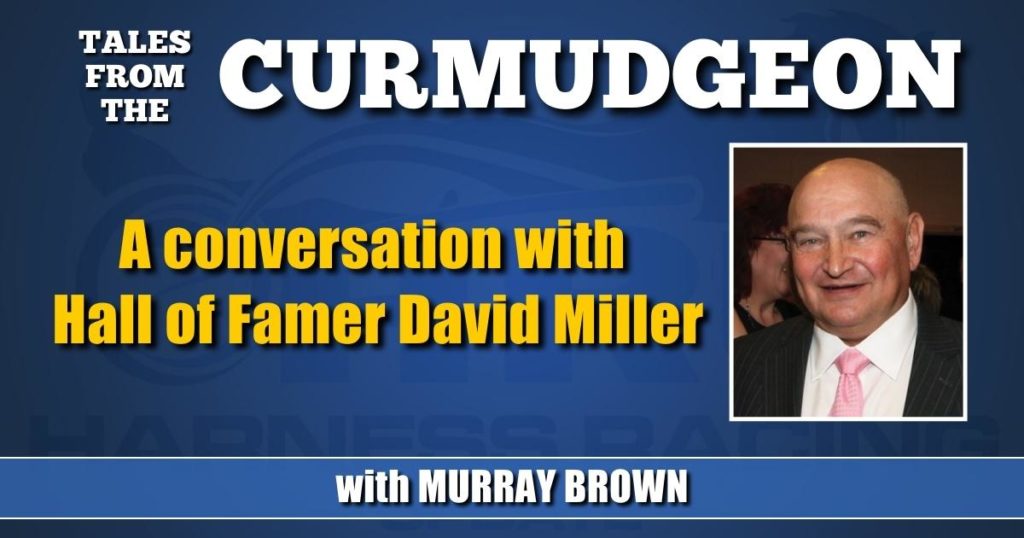 A conversation with “The Buckeye” David Miller

I challenge the readers of this column to guess how many David Millers are or have been members of the United States Trotting Association? Would you believe 60 of them? Almost seven full pages on the USTA website. But I digress. This story is about one David Miller, sometimes known as The Buckeye or Purple Jesus.

When David Miller was growing up in Ohio’s capitol, Columbus, he dreamed of maybe someday being able to drive horses at Delaware, OH. In his wildest dreams, he imagined himself one day being a good enough driver to secure a mount in the Little Brown Jug. He never dreamt that someday he would be tied with such luminaries as Billy Haughton and Michel Lachance as the leading driver of Jug winners with five — 2003 No Pan Intended; 2008 Shadow Play; 2011 Big Bad John; 2016 Betting Line and 2018 Courtly Choice. That’s not all that The Buckeye has to crow about. He is also the all-time leading driver at the home of the Little Brown Jug. He has had 1,093 starts, 242 wins, 200 places, 173 shows, a UDRS of .369 and his drives have garnered $7,203,503 for their owners at Delaware. In the Jug only, his stats read 65 18-11-11 with earnings of $2,597,326. If that were all his achievements that likely would have been enough to get him enshrined in the Living Hall of Fame in Goshen. But they are more — much more.

In his lifetime in the sport, Purple Jesus has piloted 13,886 winners and numerous others to winnings of $270,988,702 and has won just about every race that counts except The Hambletonian. More about that later.

This year you will not be spending your winters in Florida as you have done in the most recent years. Will you miss it?

“I’m guessing that I probably will. Those sunny days in Florida were enjoyable. My daughter Devan was working for the Burke operation. She had a group of horses that she would winter and race at Pompano Park. I’d spend some time driving for her and picking up some catch drives.

“Sadly, Pompano Park is no more. I’ll miss that sunshine, but I would miss not having horses to drive even more. I’m going to stay up north and drive at The Meadowlands. If I would get some drives at Yonkers and Dover Downs I would certainly make my way over there. Driving horses is what I do.

“It appears that most of the regulars will be back racing at The Meadowlands this winter — Yannick [Gingras] and Timmy [Tetrick], of course will be regulars. I understand that the Down Under guys are going home for a short while, but they will be back well before spring.”

Let’s talk about some of the best horses with which you’ve been involved.

“Some of my answers might surprise and I’m sure that I will leave out some that deserve to be mentioned. To the connections of those, I apologize. My memory is not my strongest suit.”

Colts: “The first top one was Falcons Future. He did something that no other 2-year-old, with the exception of Albatross, has ever been able to do. His connections were unable to get a race for him. So they put him. into a race with the open horses at Scioto Downs and he whipped them soundly. In recent years I would say Papi Rob Hanover. With the exception of Always B Miki, he is probably the greatest horse I’ve ever sat behind.”

Fillies: “There have been so many really good ones. The first was probably Isabella Blue Chip that I drove for George Teague.”

Colts: “Ken Warkentin. He was an absolutely exceptional 2-year-old. He was undoubtedly the very best one out of his year. He was just a little fella that came to his speed early. Unfortunately, like some other little horses, he didn’t improve much between 2 and 3.”

Fillies: “Broadway Donna was the first outstanding one. Jimmy Campbell did an outstanding job with her. She was not only the best as a 2-yer-old for me, she also came back at 3 to do the same, even though her competition both years was against Check Me out. Venerable, more recently, was just great. She managed to beat all the boys in the million dollar race at Mohawk.”

Colts: “Always B Miki was an exceptional horse. He was undoubtedly the best I’ve been privileged to drive. His race in The Meadowlands Pace, even though he finished second, might have been the greatest performance that I’ve been a part of. Papi Rob Hanover’s race at The Meadows when he set a world’s record might have been close.”

Fillies: “Test of Faith. What more can you say about a 3-year-old filly that was the Horse of the Year.”

Colts: “It is kind of a dead heat between What The Hill and Kadabra. They were both absolutely terrific trotters. If pressed, I might give the nod to Kadabra probably because he became a dominating free-for-aller at 4.”

Fillies: “Broadway Donna again. Once again a big bravo to Jimmy Campbell. I was so happy to see him voted as Trainer of the Year for 2022. Nobody deserves it more. I’ve also driven several really good fillies for Jimmy Takter.”

Males: “Always B Miki. The greatest horse that I’ve ever sat behind.”

Females: “Test of Faith. One of the greatest female pacers ever.”

Males: “Kadabra, a dominating free-for-aller at only four years of age.”

Females: “When Dovescry. One of only a very small number, maybe the only one, who could occasionally beat Bella Bellini and Atlanta.”

How about your competition? Who are the best drivers you’ve competed against?

“Number one would certainly be John Campbell. Look at the record book. He holds far more records than anybody else. Actually nobody else is even close.

“There are and have been so many great drivers that I’ve raced against — Ron Pierce, Brian Sears, Yannick Gingras, Tim Tetrick, Dave Palone and now the Down Under contingent of Dexter Dunn and the McCarthy Brothers, Andy and Todd. The young drivers in Canada, James MacDonald, Doug McNair and Lous Philippe Roy do not take a back seat to anybody. All they need, as all of us do, is the right horses. There are undoubtedly others that belong on the list. I believe that there are more talented young drivers than there have ever been in my time in the sport. All some of them need is a break and some first-hand experience.”

Please give us a quick resume of your driving career.

“I started driving on the Ohio Fair Circuit, mostly for my dad and a man named Ed Pell who taught me how to read a program properly and how to study other drivers — hopefully I’d adapt the positives and eliminate the negatives of how they drove. I then went to the Ohio pari-mutuel tracks, primarily Northfield where I did quite well. From Northfield I went to The Meadows for a short period, where I was quite satisfied playing third fiddle behind two guys named Palone and Sears. I hoped that I had gained enough experience to give the big time, meaning The Meadowlands a go. I got very lucky. I hadn’t been there very long when I got the drive behind Magician, one of the most wonderful trotters I’ve been connected with. He gave me good publicity, a lot of confidence and taught me a whole lot about driving.”

How would you describe yourself as a driver?

“I suppose when you are driving horses your first obligation is to the betting public. But almost as important, if not equally important, is your obligation to the horse itself, especially a young green one and that horse’s connections — its trainer and owner(s). I’ve sometimes been accused of under driving some horses, especially young ones. That might be a valid criticism. I believe there to be a thin line between your obligation to the public and to the horse itself. I think that a great part of my role as a driver is to teach the young horse. I like the horses that I drive to be versatile. You can eliminate versatility by sending a young horse down the road a few times – maybe even just once. I think that being, for lack of a better word “kind” to a horse will result in it becoming a better and more versatile horse for the rest of its career.”

What has been your greatest thrill in all your years of driving horses?

“Without a doubt winning the 2003 Jug with No Pan Intended. I was on a high for at least a week. For years my ambition had been to one day be able to drive a horse in the Little Brown Jug. Here I was actually driving a winner of what I consider Ohio’s greatest sporting event. For this young Buckeye there has never been anything comparable.”

Are there any significant disappointments?

“There are three. Two of them involve horses being taken down after legitimately winning major races. The first was with What The Hill in the 2017 Hambletonian. That one really hurt everyone connected with the colt. To this day I believe it to have been an unfair decision. The second involved Papi Rob Hanover winning the 2019 Breeders Crown. He was taken down and the win was given to Tall Dark Stranger. Yannick made an objection against me. I don’t blame him. If I were in his place, I might have done the same thing. What happened that night happens at racetracks all over all the time with no consequences. The third also involved Papi Rob Hanover. We had won the elimination of The Adios in a world record time of 1.47.1f. He was absolutely awesome that day. Unfortunately, he came out of the race with a broken bone resulting in his retirement from racing. I truly believe what we saw that day was just the beginning of great things to come. We will never know what might have been.”

What does the future hold for David S. Miller?

“I suppose I’ll just keep on keeping on. Driving horses has been my life’s greatest pleasure. It’s all I know how to do well. There will be a time when I’m not as capable as I once was. That time might soon arrive, but as for now I consider myself to be very competitive with my peers. I suppose that when the day comes when I’m not, I’ll know it and hang up my whip and colors.”