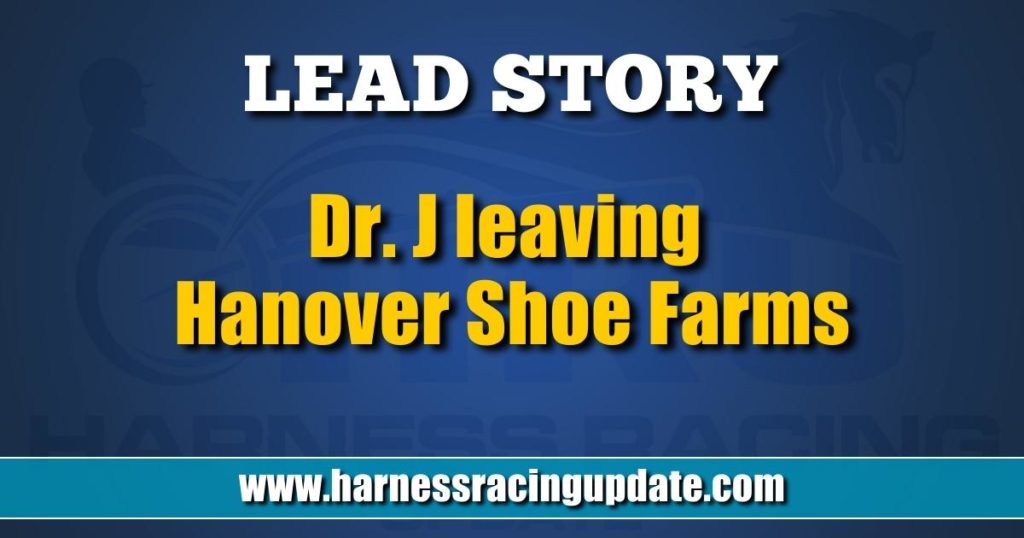 Dr. Bridgette Jablonsky is leaving harness racing’s leading breeding farm on good terms after 26 years there to start her own business as an equine consultant.

One of the key figures in the modern success of harness racing’s most storied breeding farm is leaving at the end of the year to open her own equine consulting business. Dr. Bridgette Jablonsky, the executive vice-president of Hanover Show Farms, told HRU on Saturday that she is leaving the famed Pennsylvania nursery on good terms, something farm president and CEO Russell Williams confirmed.

“Bridgette and I are good friends… We’re parting on excellent terms. Once she’s been away from the daily grind, then it’s going to be even more fun when we meet up at a sale or a race or an event and compare notes,” Williams said.

“Russell is very supportive of my decision and it’s just a new phase in my life,” Jablonsky added.

In her 26 years at Hanover, Jablonsky has developed an exceptional reputation for her equine expertise, passion for horses and tireless work ethic.

Since graduating from veterinary school in 1996, Hanover Shoe Farms has been Jablonsky’s only employer.

Williams said Jablonsky will be tough to replace, but he wishes her the best in her new career.

“It’s going to be a painful adjustment for us to make, but we can make it and, after I thought it over a while, I really felt proud that the Shoe Farms is the kind of an organization that somebody with talent can hone their skills and expand them and then go out and move up into a better career,” Williams said.

He said Hanover’s partial loss is the entire harness industry’s gain. Jablonsky will now be available to anyone who wants to hire her.

“I know we’re going to be her first client and I’ve already talked to her about something I want her to help with. It’s going to be good for the industry,” Williams said. “I think the industry deserves a pat on the back because it’s not a series of dead ends. Somebody relatively young can go out there after developing their skills and do well. I mean, she hasn’t started yet, but I know she’s going to do well.”

As for what it means for Hanover, Williams said it won’t change their long-held philosophy. Hanover has been the leading breeder in harness racing every single year since records have been kept and is on the verge of setting a new earnings record for a single year.

“For us, we’re going to strive for the same… number one, that’s integrity… We’re not going to change our basic business model. When you buy from us, you pay what you want to pay,” he said.

WHAT’S NEXT FOR DR. J

Jablonsky said she’s already lined up two clients that she declined to mention for now.

“As far as yearling selection goes, which I’m really excited about doing, I’ve already made agreements with two major organizations to be exclusive to them – or, in this sense, exclusive to the both of them and nobody else,” she said.

As to why now was the best time to leave Hanover, Jablonsky said there were multiple reasons.

“I feel like this was a good time to try it. My son goes to college in August and I’m going to have a lot more flexibility on the home front. I’m excited to branch out and see what’s out there, outside of the tent of Hanover Shoe Farms,” Jablonsky said.

She also mentioned that at age 52 it is something she wanted to try “before it’s too late.

“It’s just been something that I’ve been toying around with in my head for a while about using those skills to try something new, to work for myself and to have my own business to do consulting and advising work for people, yearling selection for people.”

TOLL OF THE JOB ANOTHER FACTOR

The toll of the job was another factor in Jablonsky’s decision.

The job requires long hours, a commitment to be on site six days a week and is physically demanding. She said she regrets missing many life events with her son.

“Now he’s going to college and it’s not like I can get any of that time back, but I can change things. I can go to his swim meets to come or I can move him into his dorm without worrying about whether I’m free that day. But, really, the hardest part has always been for me — because I’m wired this way — the mental stress of it.

“When you have 1,000 horses under your care, literally something bad happens almost every day. It has degrees of bad, but… you have your phone next to you all the time waiting for it to ring with a problem or with something that’s bad. I get very, very emotionally attached to them, even after all this time. I think that’s the hardest part. The year between when we diagnosed Somebeachsomewhere and knew he was sick until he died, that was the hardest year of my life. I couldn’t go home and partake in any sort of normal life because his sickness just pervaded my whole life. All I could think about was him and how he was sick and what we could do – I was doing research and I was just constantly sad that whole year.

“He’s the best example, but things like that happen at the farm… Bar Hopping’s loss, that was tragic. There’s a 9-year-old horse that’s fine. You put him out in the morning and you feed him at 1 o’clock and you go to get him in at 2:30 and he’s dead of an acute cardiac event. Those things, other people can roll with the punches a little better, but… I don’t know how much more of that I can take, really.”

NOT GOING TO ANOTHER FARM

Jablonsky said she currently has no interest in being tied to another farm.

“I would never go to another farm. There’s only one farm I would work at and that’s Hanover Shoe Farms,” she said.

Not that she hasn’t had offers.

“People have said, ‘I’d like to buy a farm in Lexington, will you run in?’ and I’ve respectfully declined. That’s not what I want to do. I don’t want to be tied to a farm anymore.

“I want to advise people on all of those things that those years at Hanover has truly made me an expert in — yearling selection, raising yearlings and weanlings. So, going to other people’s farms and evaluating their weanlings and yearlings and advising them on what changes we can make or how we can help them to achieve the best possible success in the sales ring… mare mating, stallion syndication, adding broodmares to bands and which mares would be most beneficial to certain people’s broodmare bands, valuating livestock, appraising them, looking at them.”

She also wants the opportunity to get to the racetrack more.

“This whole thing really gives me the chance to get back more on the racing side of things,” she said. “So, that’s really where my heart is and I really love the racing. I love going to the racetracks and I love watching races. That’s not to say that you can’t when you’re on a breeding farm, but being on a large breeding farm, like Hanover, it limits you a little bit in terms of what you can do… I love breeding and selling foals and all of that, but I would also love to be able to be more involved with the fruits of my labor.”

Williams said Jablonsky’s greatest contribution to Hanover was that, “the quality of all of our horses jumped dramatically. We started making breeding decisions based on conformation and commercial appeal. We bought fewer broodmares, but far better ones. We’re pretty rigorous in the standards that we use, more so than ever before. So, it wasn’t just a large broodmare band, it’s really, I think, the greatest broodmare band ever assembled.”

Jablonsky said she is very proud to leave when the farm’s success is at unprecedented levels.

“We blew the doors off at the yearling sales last year and we’re on the verge of another earnings record. It seems like every year there’s a new earnings record. We’re doing all this with fewer horses. We smashed our record for yearling sales with fewer yearlings, so I really feel like I’m leaving the farm in a good place and everything is set. I feel like I’m not bailing out on them. I’m leaving them in a good place.”

While Jablonsky sounds excited to start the next phase of her career, she said it has not been an easy decision to make. She said she has been mulling it over seriously since the summer and only made the final decision a few weeks ago.

She said she told Williams on Thursday of this week.

“I was going to do it Friday and then on Thursday I said, ‘I can’t take this anymore and I just have to do it,’ because I couldn’t sleep, I couldn’t think about anything else,” she said.

Williams said he was surprised when Jablonsky told him the news, but when he thought about it more, it all made sense.

“A while back, Bridgette told me that her number one passion in the entire industry is the racing itself. She loves the races. She loves following it and she’s got a mind that can follow hundreds of horses. So, that got me to thinking, ‘If that’s what she really loves, she’s here doing a whole lot of other stuff that she seems to like, but we don’t have racing at Shoe Farms – you have to watch that online or go.’ So, I was kind of weighing in my mind what her level of satisfaction might be and then I just kind of got involved in some other things and didn’t think about it anymore,” Williams said.

Jablonsky said Williams was very understanding when she told him she was leaving.

“Basically, we spent [Friday] kind of strategizing with him asking me who I thought would be best in what areas of the farm. Although the anticipation of telling him was bad, the actually telling him… he took it very, very well. I’m relieved.”

She hopes her last day as a full-time employee on Dec. 30 will go smoothly, but she’s prepared for it to be an emotional one.

“I hope it’s just a normal day and at the end of the day I park my farm vehicle and somebody picks me up and takes me home. It’s not like I’m never going to be at Hanover Shoe Farms again. I’m going to keep up the relationships with the people there. I’m saying to myself, ‘I’m leaving December 30 and I’m not going to be employed by them anymore,’ but I’ll be back during the summer to look at yearlings and I’m sure that some of the people that I’m advising will be breeding to Hanover Shoe Farms stallions, so I’ll still be involved a little bit.’

“I hope it’s not very emotional for me the last time I pull out of the drive. I just want to keep it in the back of my head that I’ll be back in some capacity. Not back working, but back looking at yearlings.”