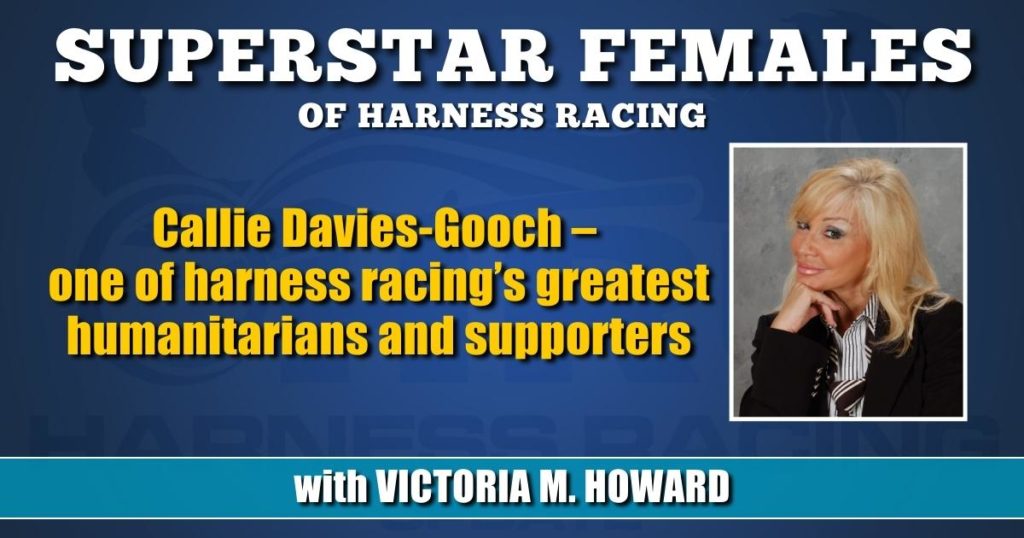 Born in Tulare, CA, Callie Davies-Gooch’s father, Neal Hillman, was a farmer and her mother Jackie Hillman was a housewife whose passion, besides her family, was horses.

It was not surprising since Jackie’s father once owned over 300 horses: a combination of thoroughbred and riding horses.

Jackie and Neal Hillman had three children— two boys that didn’t care much for the four-legged animals they had to tend to — and one daughter, Callie, who followed her mother’s passion and love for horses.

At that time, Jackie rode 3-gaited and 5-gaited horses and taught equitation (an equestrian discipline and art of riding on horseback).

When Callie was 5, Jackie was approached by California horseman Emmett Tassi to take a standardbred to break and train. That was the beginning of the family’s involvement in the sport of harness racing.

A few years later, Jackie was given a horse named Champ Tass, in partnership with Don Moretti, who was the Tassi’s nephew. That collaboration would forever change their paths.

When Callie was 14, she accompanied her mother to Phoenix Trotting Park. The enthusiastic teen was so excited and enthralled with the sport she began going to the horse races at night after school. It was there that Callie would secure a babysitting job for a family named Pierce.

Ironically, one of the Pierce boys would grow up to be one of harness racing’s top drivers — the all-time great Ron Pierce.

“After the meet ended in Phoenix, my family and I returned to California to race at Hollywood Park, Santa Anita, and Bay Meadows. The following year we went back to Arizona to race where Champ Tass won the Invitational,” said Davies-Gooch.

“Champ Tass was invited to participate in the prestigious Provincial Cup in Windsor, Ontario, at Windsor Raceway, so we loaded all the horses we had and away we went on a 2,000-mile trip to Canada with six horses, a goat, and all our worldly possessions at that time.

“I eventually married horseman Brent Davies, who drove the horses and my mother trained. We did very well and had a leading stable on the Ontario Jockey Club (Greenwood, Mohawk and Garden City) circuit for many years.

“After the marriage ended, I married Al Gooch, the assistant race secretary at the OJC. Sadly, in 1989, Al passed away at age 40.

“People have asked me why ‘Davies-Gooch.’ Well, at that time it was very difficult to revert to Hillman and I was already established as Davies-Gooch.

“My career in administration/management started in 1972 — about a year after my daughter, November, was born. I started working for the (CTA) Canadian Trotting Association as a field representative inputting race results and doing paperwork for the judges at each track in Canada. One of our duties was working with a flex writer, which would create a pink paper tape of the race results.

“I’ve had three jobs in racing: the Canadian Trotting Association before it became Standardbred Canada: Times In Harness, as the marketing manager and the Hambletonian Society/Breeders Crown as stakes manager.

“After 32 years of living in Canada I returned to the United States to work at TIMES: IN HARNESS. In 2002, I joined the Hambletonian Society/Breeders Crown and worked with and befriended two terrific people: Tom Charters and Moira Fanning.

“I experienced many exciting times, but one of my all-time highlights in the sport was when I was at the CTA and organized the farewell tour for one of harness racings all-time greatest horses – Cam Fella.

“We traveled to 27 tracks and racked up 47,000 miles across the U.S. and Canada. One hundred per cent of the proceeds from the souvenir sales went to several charities: Norm Clements’ Jennifer Ashleigh Children’s Charity, The Harness Horse Youth Foundation and The Cancer Society.

“I’ve also done many events raising funds for harness horse charities. In my 20s and 30s I catered parties for my friends in harness racing, such as the opening of the new Armbro Farms (now Winbak Farms) on Highway 10 in Brampton in 1978. It was a huge success with 2,600 people attending.

“We set up buffet tables down the length of the new stallion barn before any horses were in there. I had several refrigeration trucks and set up kitchen in the two-car garage where I had numerous ovens to work with.”

Now living in the United States, Callie still has roots in Canada as her daughter, November, and granddaughter live in Mississauga, ON.

Callie had three children: November, a blind paralegal, and twins January and Beau, who are both deceased.

“January was involved in the sport as a videographer who worked at Woodbine before coming to the United States. My brother Jeff did go to Canada for a while to work in the business and met and married his wife, Pat, before they returned to California to farm and raise their children.

“I’m also an active member of the New Jersey chapter and national of the U.S. Harness Writers Association and have served in many capacities with that association.”

But Callie is not done supporting and working for our great sport, as today she works event support for John Campbell and Moira Fanning of the Hambletonian Society/Breeders Crown — organizing the winner’s circle and helping out in an any capacity that she can.

All work and no play? Not this lady.

On her ‘downtime’ Callie and her husband Greg Krauth live six months in Dover, DE and six months in Manteca, CA at the family farm.

Callie and Greg met in 2008 and were married at The Meadowlands Racetrack by Dave Little in 2016. A special place for a very special event.

“My husband and I bought an R.V. and drive it across the country in the fall and spring. We live in it while we are in California where I have all of my woodworking equipment on the carrier on the back.

“We take our time driving and it usually takes about 10 days cross country to reach our destination — depending on how many horse tracks, horse friends or zoos we stop to visit,” Davies-Gooch said, laughing.

“We’ve seen the Grand Canyon, Yosemite, Yellowstone, the Petrified Forest and Painted Desert on our travels, to name a few.

“I devote all my spare time to woodworking products to donate to my charities for auctions. All my work is wood with a horse-theme, of course. I take old things and reduce, recycle and up cycle.

“I take orders for wood products with donations to any horse charity: the Harness Horse Youth Foundation, Harness Museum and the Standardbred Retirement Foundation, or any other horse rescue.”

If you are interested in supporting any of Callie’s charities or owning one of her unique horse woodworks, you can contact her at woodworksbyCDG@gmail.com.