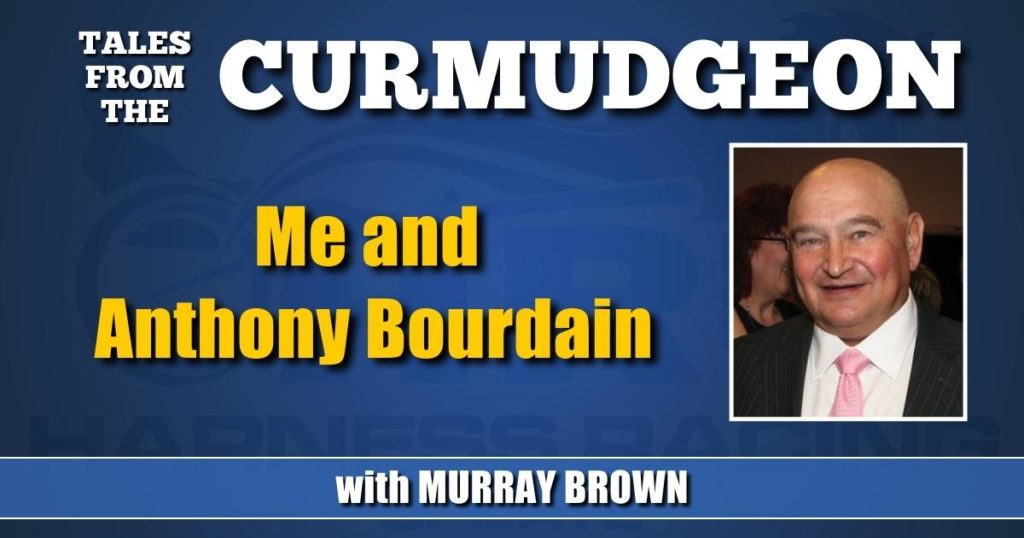 Me and Anthony Bourdain

In honor of best-selling book Down and Out in Paradise: The Life of Anthony Bourdain by former harness racing writer Charles Leerhsen — and also as an ode to the great food event that is Thanksgiving — I share my thoughts on foods as a response to some of Bourdain’s culinary loves and hates.

This scribe recently came upon a topic on Facebook relating to Anthony Bourdain and his likes and hates with regard to food.

One might legitimately ask what does this have to do with harness racing? The answer of course would be nothing or very close to it. Allow me to rationalize. I might say it does — a little bit — but very little.

One of our harness racing brethren, Charles Leerhsen, formerly of USTA’s publicity department, as well as Newsweek and Sports Illustrated is the author of the present New York Times best-selling biography of Bourdain — Down and Out in Paradise. In addition, we have several foodies in our midst, including the late and loved Dave Brower, along with Art Zubrod, Dr. Nena Winand, Moira Fanning, USHWA president Barry Lefkowitz, yours truly and a host of others. Once again picking at nits, this past week was also Thanksgiving week, one of the great food celebrations of the year.

So here we are on Tony Bourdain’s food loves and hates and my take on them.

Tony loved it. I do as well, although it took a whole lot of time for me to reconcile myself to the idea of eating raw fish. I do need to mention that, as with all food, there can be a huge difference in where you get it. Most of the stuff you can get in an ordinary supermarket is acceptable. If you are fortunate enough to dine at one New York’s extraordinary great sushi restaurants such as Bar Masa, it will be an experience that you will never forget. You will also be breaking the ordinary person’s bank.

Tony hated it. For me it would depend on which area of the plane in which I was seated. In the rear where I generally would be, I would concur with Bourdain. Up front, it would range from acceptable to fantastic. I will never forget the first time I flew first class. It was 1968. I was asked to speak before the British Columbia Harness Horseman’s Association. They most kindly sent me a first class ticket. I was flying United Airlines – Baltimore to Seattle; then Seattle to Vancouver. The main course was Indonesian rack of lamb. Incredibly delicious. It is a dish that remains with me 54 years later.

Tony hated them. I do as well.

Tony was generally not adverse to food that was hot. In the case of this Memphis specialty, he felt that the heat in the dish took away from the flavor of the chicken. As for me, I don’t want to eat flesh numbing food regardless of how flavorful it might be.

Tony thought it is just a ploy for the restaurant or the chef to add to the price and the “elan” of a dish. He did like the taste of real truffles though. As for me, I really like truffles as well. I like my french fries, the dish to which truffle oil is generally added naked, sometimes even without salt. I also like real truffles.

Tony hated it. He thought that it was, as is the fake American salad dressing “French,” just a make believe dressing designed to cater to poor American tastes. I neither hate it, nor do I like it. If I were having wings and that was all that was available, I suppose I would use it.

Tony disapproved. He believed that there was breakfast and that there was lunch. He didn’t believe in the necessity of putting anything in between. I’m inclined to agree. I rarely eat breakfast except when I’m not home. Actually, I rarely eat any meal according to the clock anymore. I usually eat just when I’m hungry or when I might have a specific eating engagement.

Tony said never waste your money on it. I agree. Why eat it? It has no taste.

Tony disliked them because of the extra slice of bread in the middle. I generally like them. I loved the one from my youth at Piazza Tomasso in Montreal. Yes, a club sandwich in an Italian restaurant. The reality was that club sandwich and their onion rings were better than any Italian food they had.

Tony loved them. I’m assuming he was referring to “dirty water dogs” sold from carts throughout the city. I like them, don’t love them. However there is a New York City hot dog that is the very best hot dog ever made. That’s the one to be found at Katz’s Deli. Do you want a perfect meal? Go to Katz’s and have the hot dog as an appetizer and have the pastrami sandwich as your main course. You might not eat for another week.

Tony didn’t like it, but mostly because he believed it to be a carrier of harmful bacteria. I hate it because it is mostly composed of mayonnaise. Mayonnaise! Yuck! That’s something I’ve hated all of my life. However in old age I’ve taken to occasionally trying compounds of it such as remoulade sauce.

Tony wouldn’t eat it because he also believed there were a lot of bacteria in it. I don’t like it because I am very picky about the fish I eat and swordfish is not one of them. I find it to be too dry. I suppose if you bathed it in a half pound of butter, I might eat it.

Bourdain had been quoted as both liking it and not liking it. I have no idea what the damned stuff is and I’m not about to try to find out.

Tony didn’t like them because he felt they were too porous and got messy when eating a hamburger. Tony was wrong. Brioche anything is a great blessing. Brioche buns are good with anything.

Tony didn’t like them and I don’t know why. I’m okay with them as long as they stay in their own lane.

Tony didn’t like them because he had eaten what he said was the real thing in India and felt that the New York variety was inferior. As for me, I’m not a lover of Indian food anywhere. I’ve been told that the best Indian food, including India, is to be found in my favorite city, London.

Tony loved it. I’ve never had it.

Tony loved this assortment composed mostly of dried pig offal. I might if it were made up of salami, corned beef, Montreal smoked meat and karnatzel.

Tony thought it pretentious and used too heavily when used. I think it’s just okay.

Tony loved it. I do as well, except for scallops. I used to love them, especially the little bay variety, Then for some totally unknown reason the thought of eating scallops, especially the large sea ones nauseated me. I cannot explain why.

Tony didn’t like it. I concur for several reasons, the two chief ones being that the food often arrives cold and you get all the food together. I prefer to eat in courses.

Tony didn’t like it. I’m okay with it, but my preference is to use the wasabi alone and not use the soy at all.

Tony didn’t like them because he thought that they were a rip-off used to extract extra money from the customer. Much like prime rib is rarely prime, so is the so-called Kobe beef rarely Kobe. I say kobe, shmobe, the sliders taste good.

Tony didn’t like them because he said they get soggy. I’ve been eating them all my life and I have yet to encounter my first soggy one. Delish, toasted with butter seeping through the holes and the entire covered with orange marmalade. Yum.

Tony loved it. So do I, especially in a three star Michelin restaurant in France. I’ve eaten at some here. They are very good, but not up to the mother country.

Tony loved them. He was spot on. I’ll go even further and say that until you’ve had one or maybe a half dozen, hot and straight from the oven at the store, you have no idea what a great bagel should taste like. I might add that if you go there 24/7/365 at any hour of the day or night, they will be shoveling them hot from the oven.