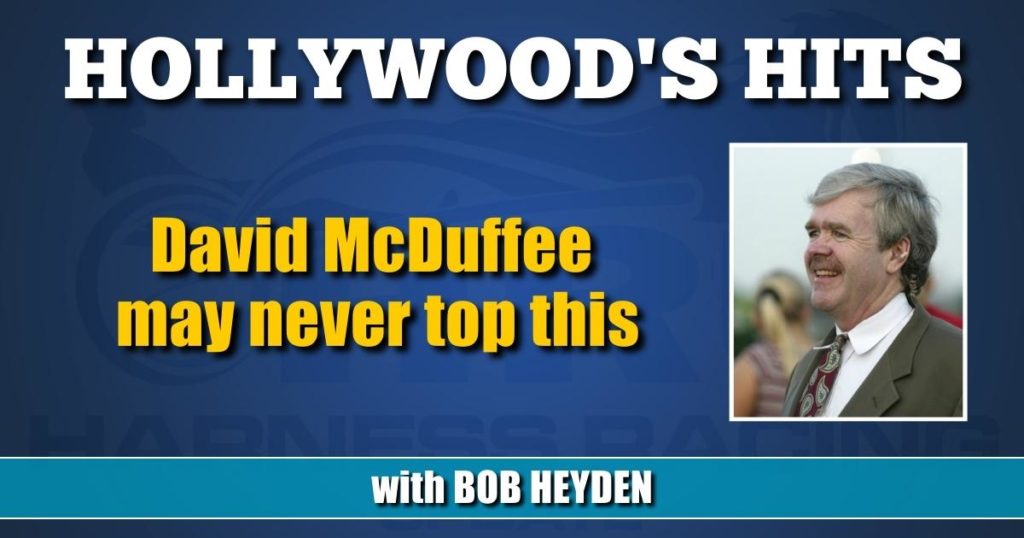 David McDuffee may never top this

Owner David McDuffee is likely Hall Of Fame bound one year soon. But I wonder if he has ever topped the weekend of Aug, 13-14 in 1994. He was five-for-five, winning two overnights at Foxboro, the

$747,400 Woodrow Wilson by a nose with Magical Mike, the Adios as a longshot with full brother Miles McCool and the Wilson consolation with Hawaiian Hole.

It is now 26 years later and he still holds the record. How long will this stand?

Workaholic, the first Breeders Crown winner, was born 40 years ago (3/15/82). We are about two weeks from his milestone win in the first ever Breeders Crown, held at Lexington on Oct. 5, 1984. His yearling ad looked like this:

You want points for honesty? This buyer sure gets them. I recently came across a resale slip from 74 years ago at Harrisburg. All slips carry the reason that such and such a horse has to be resold. Check this one out:

Yes, there was another trotting filly named Atlanta. She was born in 1883 and was sired by Attorney.

Several ownership transfers and she wound up the property of Daniel Hayes. Her first foal in 1888 was Alix, who became the fastest ever female trotter — 2:03 ¾.

Her second dam was sired by the thoroughbred Iowa.

Su Mac Lad was 8-for-13 and earned Horse of the Year honors.

A Cs Viking won the Hambletonian for Sanders Russell who with a broken ankle had to be lifted in and out of the race bike.

If he makes it to the 2023 Hambletonian at age 61, it would be the same age as his brother John when he made his final Hambletonian start (2016 — ninth with The Royal Harry).

Jim is a one-time assistant to Glen Garnsey — but only after he assisted John in 1982 the year they won the Jug with Merger.

Run The Table, Tagliabue, Indian Alert, Jefs Eternity — it’s easy to forget some of Jim Campbell’s former stars because he is still so relevant.

Still, MacDonald is a long way from his $300 first purchase of Jim Bob Skipper at age 13. His first two winners on the fair circuit at the very same oval Joe O’Brien won his first races in 1932 — St. Peters Matinee Track.

SOME FACTS ON JACK DARLING

Taking us to where we are today:

Notice the dominance of sire Adios from Adios Harry-Adios Butler and then Bret Hanover.

Here’s the copy from his 1978 ad selling as a 2-year-old unraced at Harrisburg:

“A quick and well-gaited individual who goes free-legged and worked in 2:14 before being turned out in May. Should make a very useful raceway horse. He is the second living foal of the stakes-placed Noble Clair 2:04 she a half-sister to the trio of stakes-winning fillies Lucille Eagle 2:00.1, Claire Sampson 2:003 and Jean Sampson 2:02.3 and to the dame of Noble Gal, 1:58.2.”