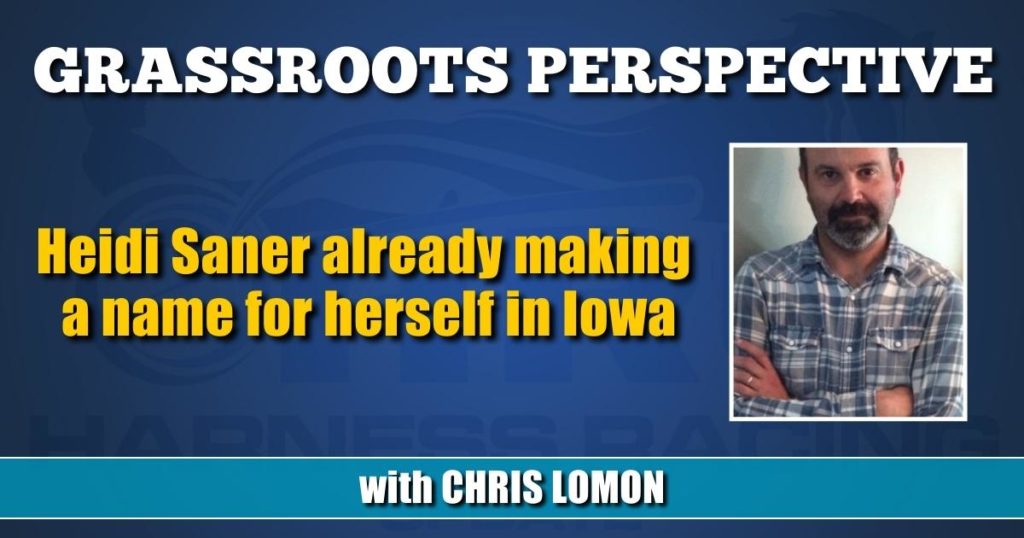 Heidi Saner already making a name for herself in Iowa

Her career in the race bike has just started, but Heidi Saner is already showing plenty of drive.

Less than 10 starts into her standardbred career, Saner, daughter of longtime trainer John Saner, and the girlfriend of fellow driver Jason Telfer, has already made a name for herself in Iowa racing circles.

She wasted little time in announcing her arrival onto the local scene, finishing third in her milestone first official start, the one that came at Bloomfield, a half-mile oval in the city of the same name, on July 12.

Her partner on that day was Beach Bum Harley, a 2-year-old pacing son of Beachtrea—Aries Angel, owned and trained by her father.

The odds – it was a non-betting affair — were stacked against the driver and the colt bred by Spring Haven Farm in Utica, OH, but the duo managed to finish third of four against more seasoned competition.

“So, I’m in there with a 2-year-old, and the others are seven- and eight-year-olds. My horse, the fastest he had gone at that point was 2:14, and the other horses were in the 1:54 and 1:56 range. But we all crossed the finish line at what seemed to be the same time and the race went in 2.03.3. You want to win, but that was such an amazing effort on his part. He really stepped up and showed a lot of heart.”

This time, it wasn’t a close finish. And this time, Saner and Beach Bum Harley had a picture-perfect ending to their journey together.

“I’m still smiling about it,” said Saner, of the milestone win for both horse and driver. “It wasn’t really a close finish, the other horses were a bit of a ways back, so that was a good feeling all around. It was exciting. That’s the moment you always hope for and when it does happen, it’s just as good as you dreamed of.”

In many ways, Beach Bum Harley happens to be the perfect fit for Saner.

What he lacks in size, he more than makes up for in spirit.

“I like driving the smaller-type horses. The smaller ones, I always seem to get along with them better. They have the same amount of drive as the bigger ones, but for whatever I reason, I tend to get along with them better. He’s off to race in Ohio now because he’s not Iowa-sired. I’m very grateful to have started out with him. He’s a smaller horse, so that makes me happy too. He and I will always have a special connection.

Perhaps the best thing Saner has going for her so far in her career is a willingness to learn her craft.

While some athletes could be swayed by their early success, that’s just not her style.

“I still do get a little nervous before I line up before the gate, being around the other horses. Usually, I jog or train them by myself, so this is a totally different scenario. But it does get easier with each start.”

It was in the last five or so years that the thought of sitting in the sulky began to occupy Saner’s thoughts more regularly.

In 2021, she made the decision to earn her driver’s license.

“I’ve wanted to drive for a long time, but I was also so nervous. Finally, last year, I thought, ‘Okay, I’m ready.’ So, I got my license and I just love it.”

It’s also helpful to have a long association with the standardbreds and to a person who knows the industry well.

“My dad has been part of the industry my whole life. He raced out in Illinois, in Chicago and all the big tracks, and then moved to Iowa. He got out of it for a little bit and then back into it about 10 years ago. The last six years or so, he’s had his own horses. I help him out almost every day, jogging horses, cleaning stalls and all of that.”

Saner isn’t shy about asking for advice or being open to hearing it.

Support is easy to come by.

“My dad, he’s always giving me tips. He’s very, very smart about all of this stuff. I listen to everything says. My boyfriend, he’s the same way. He’ll tell me if I’m doing something right, something wrong, if I need to change up something. But both of them have always been there for me and have really helped me.”

The biggest challenge when she’s holding the reins happens to come before the field is sent on its way.

With each start, however, that particular challenge becomes a little bit more manageable.

“Going to the starting gate is a bit tough right now. One horse, Midnight Celebrity, I’ve driven him twice now, and he’s huge. I was a little intimidated driving him at first because he really wants to get going and I have to hold him back at a bit. By the end of the race, my arms were like jello. But that’s only helped me get more comfortable, having those different experiences with different horses. That’s what you want and that’s what you need to grow. They all teach you something different.”

Soon enough, in a little less than a month’s time, Saner will be sporting a different look than she currently does om the racetrack.

Her racing colors have been ordered and she’s counting down the days until they arrive at her front door.

“The colors I picked are purple, black, and white. Purple is my favorite color, and I just thought the black and white would look nice together with that.”

Bu the young horsewoman from Iowa is looking to make more than just a fashion statement in the days, weeks, and months ahead.

Saner, a Certified Medical Assistant, who also works at a local hospital and an area nursing home, will look to keep her early momentum going.

An open mind, staunch support from her boyfriend and her father, combined with an optimistic outlook, are an ideal trifecta for the new driver seeking to establish herself on the racetrack.

“Life is good. I just want to keep getting better, learn as much as I can, and get better every day. I really love what I do. I’m happy I made the decision to become a driver.”