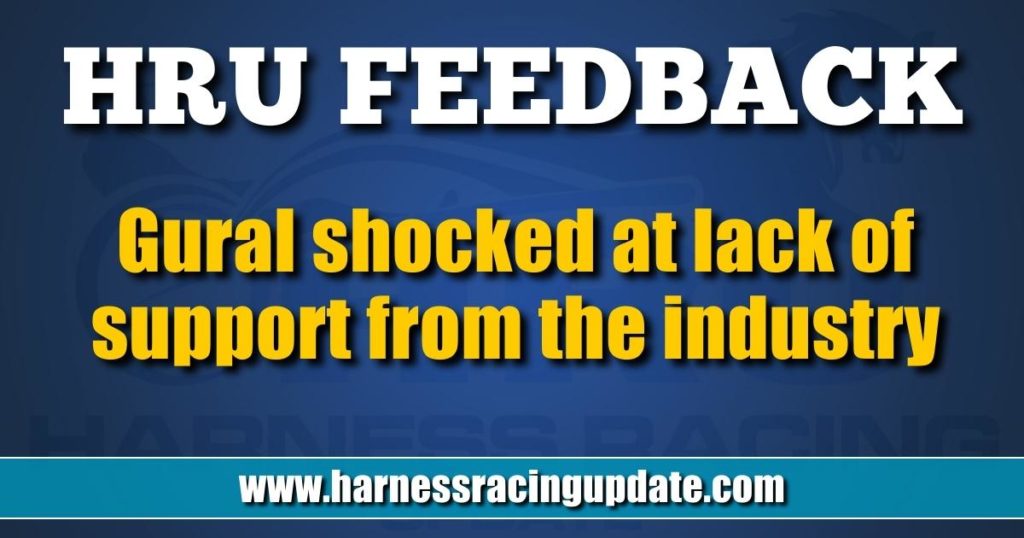 Gural shocked at lack of support from the industry

While it’s nice to see so many positive comments about the racing last Saturday, the reality is our customers continue to die off and we know young people have no interest. But, worse yet for me, is the lack of support from the industry.

On Friday, we had approximately 100 2-year-olds making their first or second start in a pari-mutuel race at The Meadowlands and Trotters, the private club we built for owners, only had 20 customers. On Saturday at the Pace our dining room Pink was only about half full and while Trotters was crowded there were still empty tables for our signature evening card. Our net revenue on Pace elimination day this year compared to 2013 was down by $42,000 and our net revenue for Pace night declined from $252,573 to $175,677.

We anticipate losing about $5.5 million this year from racing up from a loss last year of $3.5 million and anyone who thinks the sport is healthy is fooling themselves. I anticipate the decline from our regular customers but, to be honest, I am shocked at the lack of support we received from the industry.

I know it is fun to go to Lexington for the sales and it is exciting to watch the baby races and see how you have done in your yearling selection, but it is also fun the watch these horses perform in person rather than on your iPad. As you might expect, our sports betting revenue is on the decline because of the fact that New York has now legalized online sports betting, but it would really be helpful if the industry would support us over the next two weeks. Trust me, it is fun to watch live racing especially when you see a world record performance like we witnessed Saturday.

I hate to be negative but not using 5 per cent of the slots money for marketing when we first began to receive it was a catastrophic mistake. The biggest joke for me is that the biggest concern that the horsemen have is the fact that we had one 11-horse race for 2-year-old pacing fillies rather than split it which is what we normally do.

Should we also pay horses at the half?

A lot has been said and written about the dire need to increase the amount of movement during our races to help offset speed bias, make the races more exciting to watch, and reduce the number of prohibitive favorites. All of which could lead to increases in betting handle.

Certainly I endorse this and I believe there is a relatively simple way to make this happen (in addition to Jeff Gural’s mandates to drivers at the Meadowlands).

Consider paying 40 or 50 per cent of a race’s purse based on horse positions at the half mile mark. So, for example, if a $10,000 gross purse, pay $4,000 of that purse to the first five horses at the half, using the same percentage breakdown we use now. Then, pay the remaining $6,000 based on finish order at the completion of the race. (A strong winner would still be rewarded with full purse share if they are in front at the half and the finish).

It’s likely this will create much more early movement, especially during the second quarter, where at most tracks there is little or no movement. Too often, the second quarter approaches 30 seconds (e.g. Yonkers); or we see near scripted racing where the favorite and/or second choice are in the top three positions at the quarter mark (e.g. Harrah’s Chester). This would likely be more effective on half and 5/8th tracks than on mile or 7/8ths tracks, admittedly.

If one or two tracks were to implement this on an experimental basis, we could determine if this leads to more exciting racing, fewer prohibitive favorites and increased handle.

And a last note… down the road, we might even consider enabling betting based on half mile results!