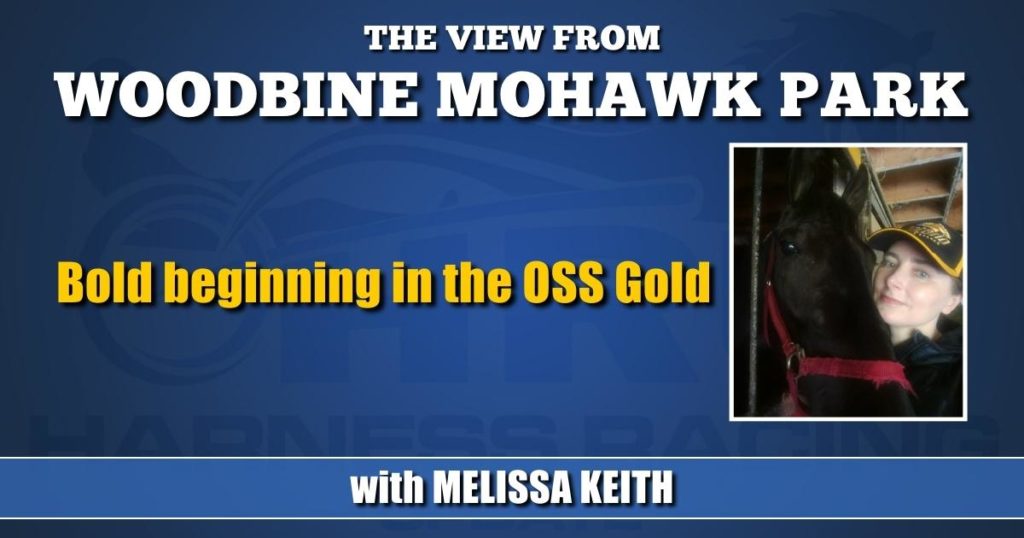 Bold beginning in the OSS Gold

Better B Bold may have a bright future for the Steacy family and its connections after a jaw-dropping finishing kick in his first Ontario Sires Stakes event of 2022.

Suddenly on the scene strides from the wire, Louis-Philippe Roy’s colt launched into remarkable gear. “Check out Better B Bold! He gets airborne late for Roy! He just missed – what a closing kick!” declared Middleton. After the race, he turned to social media. “Not sure I’ve EVER seen a rookie colt close as quick as Better B Bold did in Race 6 @WoodbineSB in his pari-mutuel debut,” he tweeted. “Flat out flying with monster strides!”

Sent off as 9-5 co-favorite, Better B Bold had previously announced his closing ability in a July 2 Mohawk qualifier for 2-year-old colts and geldings. While his off-the-pace 1:57s win wasn’t the quickest of the day, his :26.3 closing quarter was the bullet last panel for the 14 qualifiers. Two other rookies closed in sub- :28 final fractions to win their qualifiers, colt Nightime Dancer (:27.2) and filly Front Page Story (:27.4), but none quite as bold against the stopwatch as the winner of qualifying race 3.

The Betterthancheddar–B So Lucky colt was a $40,000 Lexington Select purchase last fall.

“He’s very fast, for sure. I don’t know how far he can carry his speed, but we’re going to find out soon. He’s had two qualifiers and a race, and he’s been below 27 seconds in his last quarter, all three,” Mark Steacy told HRU. He co-owns Better B Bold with David K. Reid of Sydenham, ON and the LandMark 15 Racing Stable of Lansdowne, ON. Longtime owner Reid liked the yearling colt’s pedigree; Steacy liked the conformation and placed the top bid.

LandMark 15 is the most recent iteration of a popular fractional group Steacy established in 2005, as part of a successful Standardbred Breeders of Ontario Association (SBOA) new owners’ mentorship program. Now independently run and administered by Steacy’s friend Howard Pearce, members pay $2,000 (Can.) per share of a yearling and are not billed for any additional expenses for the duration of each partnership. “My son Clarke Steacy breaks them. We do it ourselves. He’s in charge of that for me,” said the Lansdowne, ON horseman, who is based at his own half-mile track-equipped training center.

Better B Bold was a good student, but not an instant standout.

“He did everything he was supposed to do. He was very ordinary training down. Of course, we don’t make big speed in the wintertime, either,” said Steacy. After the colt’s most recent Mohawk qualifier, his owner/trainer made the understatement that “he went very well.”

It’s a remark that communicates the cautious optimism of a knowledgeable horseman from a family well-known in the OSS program: Mark earned the Ontario Sires Stakes’ Johnston Cup as top trainer in 2016, 2017 and 2018; his son and Better B Bold’s primary trainer, Shawn Steacy, collected his first Johnson Cup in 2020.

“You always like to see them finish off nice, which he did, and you also like to hear the driver come off the track and like them. Louis [Roy] came off that day and he liked him enough that in [Better B Bold’s] first [pari-mutuel] race, he took off another horse that he won in :55 with, to drive Better B Bold,” said Mark. “Even in his only race [July 9], he basically said, ‘I don’t know if I’m going to travel any faster than that one!’”

Mark watched the colt’s first race from outside the Mohawk paddock.

He described the LandMark 15 ownership group as “pretty keen and excited” about the lightly-staked Better B Bold’s future.

“We’ve been doing this for 15 years and we’re planning on doing a LandMark 16… I go out and visit many farms before [the yearling sales], turn them out in the paddock and all that stuff. We try to pick what we can afford. We never buy 100 per cent; LandMark usually partners with some of my owners. That’s the good thing about most of the people: They don’t care if they own one per cent or 20 per cent – they feel like they own one 100 per cent.”

“And he was Canada’s 3-year-old [male] trotter of the year that year,” Mark said. “We’ve had some other nice ones, but that’s the biggest one.”

Yearlings are selected from within a certain price range in order to keep them affordable and bill-free for fractional owners. “We’re always hoping to get at least a hundred [shares sold per horse], but we would take more, so people can buy one share for $2,000 or 10 shares for $20,000,” said the trainer, who keeps the focus on Ontario-eligible yearlings. “Most people can’t afford to go out and buy a $40-, $50-, $60-thousand horse on their own.”

Bred by Winbak Farm, Better B Bold inherited his sprinting ability. Mark explained that it’s not a quality that can be trained into a horse, or that naturally develops over time.

“I don’t think he can go a whole lot faster – I think when a horse is going 26 seconds, there’s not a lot faster they can go than that… The big thing with these horses, especially these young 2-year-olds, when they go that fast, is you always hold your breath that they’re going to stay healthy and sound for you.”

“His second Gold is on Monday. I think he’s eligible to the Champlain, maybe. I didn’t stake him a lot. He’s basically Ontario Sires [Stakes],” Mark said. “I did pay him into the Battle of Waterloo, but that’s not a favorite race of mine; I think it’s a little too early on a half-mile track. I’m just not sure… After this Monday’s race [July 18 at Mohawk], he’ll probably get a week off, to prepare for the next Gold.”

Taking it slow with the precocious speedster, Mark said caretaker Ariana Reeves is helping Better B Bold stay quietly primed for his next start.

“At this point, I’m a little scared to turn him out,” Mark said. “He’s spoiled in the barn. He’s still a stud, but he’s very easy to get along with. Ariana looks after this horse, but she’s only had him for a month. It was my son Clarke and his wife Cara Steacy that did all the work on this horse all winter, developing him until he got ready to qualify.”