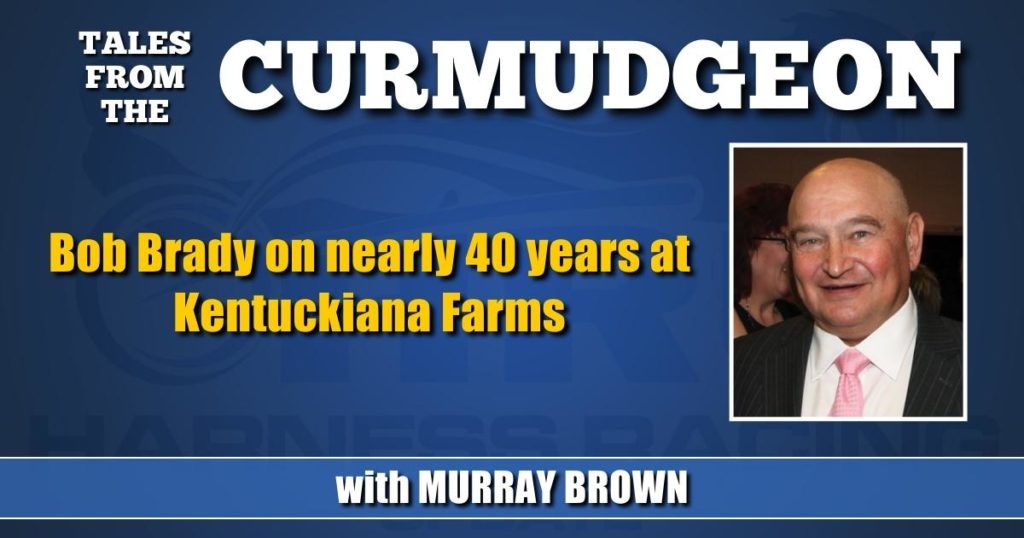 Bob Brady was not born into harness racing. However, he has been involved in the sport for the greatest part of his life.

He grew up on a cattle ranch in Florida. He moved to Kentucky when he was a sophomore in college. Brady attended the University of Kentucky where he majored in Business Administration.

His first job involving standardbreds was working at Holly Lane Farm for Jerry Snyder. After graduating from UK, he rose to the position of farm manager at Holly Lane.

In 1982, he married Becky Crouch. They have four children, daughters Lyndsey, Meghan and Hannah and son Ryan.

In the mid-‘70s all was seemingly well in the standardbred industry in Kentucky. There were several successful breeding farms including Castleton, Almahurst, Walnut Hall and Stoner Creek Stud. All of them where standing stallions. As it had been for almost as long as standardbreds had been bred and raised, Kentucky was at or near the top of the standardbred breeding in North America. Several states, primarily New York, New Jersey and Pennsylvania, had established successful sires stakes programs. Kentucky had none. In addition, shipping semen had become the norm. People were certainly less inclined to ship mares to Kentucky when it was easier and less expensive to simply ship semen. Business at the breeding farms in Kentucky was substantially impacted. The farms still bred and raised their own horses, but outside business was affected. In 1988, Brady was hired by his father-n-law Tom Crouch to manage Kentuckiana Farms. He has never left.

The farm has transitioned to the second generation being owned by Bob and Becky Brady along with Ken and Lisa Jackson. Brady is in effect “Mr. Inside” dealing mostly with the horses, the farm operation and clients. Jackson became “Mr. Outside” dealing mostly with the business aspects and the political ends relating to Kentuckiana Farms in particular and harness racing in general. Brady says that Jackson is one of the people most responsible for the renaissance and racing incentives enabled by the new Kentucky legislation.

“Since its inception, Kentuckiana has always strived to be a high quality farm in every aspect. Whether it be stallions, mare and foal care or in raising the best yearlings possible. As commercial breeders in a very competitive market place, we work hard every day to achieve that goal,” Brady said.

This scribe caught up with Brady just prior to the time when this year’s yearling crop will come in to begin the process of prepping them for the Lexington Selected Yearling Sale in October.

Q: You’ve been at Kentuckiana for 38 years. Tell me about that.

“I look upon myself as having had a wonderful career. We’ve raised lots of great horses. I’m not sure of the exact number, but we’ve raised and sold somewhere over 40 different horses who each earned in excess of a million dollars. The highest money earner was Mister Big who earned in excess of $4 million. Our newest addition to the list is Greenshoe.”

“Our son Ryan is the farm manager. He’s doing a fantastic job. I can’t imagine running the farm without him. He’s smart, dedicated and has total respect from the crew. He never stops working or being involved in what is taking place. He is actually educated as an accountant. After some time, he decided sitting behind a computer, shuffling numbers was not what he wanted to do with the rest of his life. It’s very rewarding to be able to work with family and all be on the same team.”

Q: Has the new program in Kentucky tempted you to expand? With these new incentives more and more people are breeding and raising their foal in the Commonwealth.

“The short answer is a resounding no. The land and horses might be or become available, but the supply of people willing and able to do the work required just isn’t there. When looking at the labor pool, not only is the supply of good help quite small, but the competition is very stiff. Lexington keeps growing. There is lots of industry. Not only is the pay often higher, but the benefits outside of working at a horse farm, especially the opportunity to have a five or even a six-day week are tough with which to complete. In addition, we are competing for help with the thoroughbred farms who are able to often pay better than we do. I consider ourselves to be quite fortunate in having the great staff that we have.”

Q: What is your horse population like at present?

“We presently have 225 year-round resident mares, which is an ideal number for us. That, plus 160 foals, and 130 yearlings. We have been blessed to have many wonderful clients who have become great friends and remained with us for many years.”

“I think it is very strong. Maybe as good a consignment as we’ve ever had. I suppose that’s a familiar tune that most consignors sing. It’s probably so. The breed is evolving and quite quickly. We have a wonderful group by Walner, Chapter Seven and Muscle Hill, as well as some from the first crop of Greenshoe. As time has gone on, I’ve found that our consignment has become more trotter oriented. I would guess that two thirds of the yearlings that we will be selling are trotters.”

Q: Of the many yearlings that you’ve prepared, do you have any favorites?

“That’s a very tough question. We’ve had so many good ones. I suppose that if you insist that I give you an answer, my choice for a trotter would be Lilly Stride, and for my pacer it would be Western Terror. They both were perfect foals that turned out to be pretty good.”

Q: This is probably the calm before the storm. The breeding season is over and this year’s yearling crop will soon be coming in for the yearling sale this fall.

“You can call it calm. I suppose in relative terms it might be. However, it’s very rare at a functioning horse farm that we are not quite active. In our spare time, we have 150 acres of alfalfa to bale. It’s now mid- July and we will begin bringing yearlings in around early August. The numbers can be fluid because occasionally the owners aren’t quite sure if they want to keep one. I would say that we will end up having 105 to sell.”

Q: Have you had any that performed poorly prior to the sale that turned out well?

“Occasionally, but not often. One that way was Ken Warkentin. He was so poor on his video that we had to piece it together. It wasn’t so much that he couldn’t trot well, but more like he didn’t want to. I probably would refer to him as a contrary brat. Of course, as a 2-year-old, he was almost invincible. He was bought by Perry Soderberg and trained by Jimmy Takter. They must have seen something about him that made it worth their taking a chance with him.”

Q: When do you start hearing from customers who want to come see the yearlings?

“I’ve actually heard from a few already. My stock answer is to stay away until they are civilized and looking good. It’s unfair to look at a yearling two months before the sale. The yearling you look at in August is not the yearling that will be in the sales ring in October. They do change. A month or so can be very meaningful at this time of year. I get the feeling that’s it’s yearling time when Perry Soderberg calls to tell me that he would like to look at them. He is usually the first to show to each season. Ideally, I’d like to start showing after they’ve been shod and groomed and had their videos done.”

Q: Let’s switch gears and talk about a very special horse. Her name is Test Of Faith. How did you guys come to own her?

“All credit should go to Mel Segal. We have been friends with Mel for somewhere around 40 years. The plan was for us to one day own a horse together. The stars must have been shining down on us. Fortunately, that horse just happened to be Test Of Faith. We had her dam at the farm and liked her. Mel had been following her family for a long, long time. He watched her video and really liked her. He asked me to look at the video. I did and thought she looked good and traveled well. Mel had Brett Pelling look at her in person. Brett really liked her, so Mel bought her at Harrisburg for $92,000 and invited us to be partners. In my wildest dreams I would have never thought that she would turn out to become as good as she is. It’s almost like a fantasy. Horse of the Year in 2021, and now a world champion as the fastest female ever. Dreams sometimes do come true.”

Q: What are your thoughts on the sport and its immediate future?

“Right now I like where we are – certainly in terms of where the breeding industry is. Kentucky, Ohio and Indiana are doing great. There is improvement in New Jersey. So long as Pennsylvania and New York can retain their casino monies, they will probably be okay, also. We always have problems with our lack of exposure and attendance numbers, but with our purse levels what they are and to some degree our horse shortage issues, the opportunities are better than I’ve seen in many, many years.”