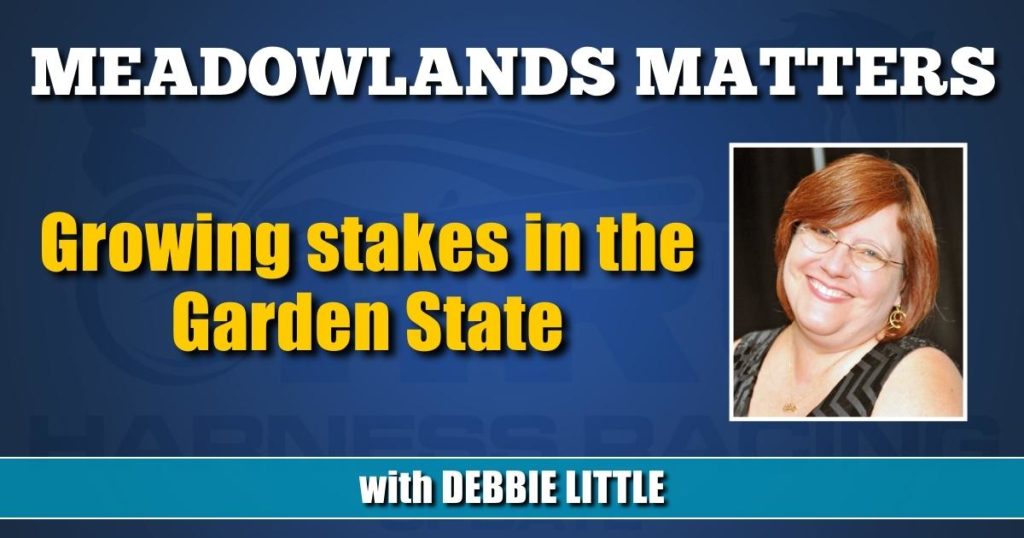 Growing stakes in the Garden State

With $240,000 New Jersey Sires Stakes finals for 2-year-olds set for tonight at
The Meadowlands, the state’s breeding industry has rebounded.

The New Jersey Sire Stakes (NJSS) program had one foot in the grave as recently as nine years ago, but thanks to the efforts of Meadowlands’ president/chief executive officer Jeff Gural and the Garden State legislature, it’s now full of life.

“Everything feeds off The Meadowlands,” said Mike Klau, syndicate manager for Southwind Farms in Pennington, NJ. “Without that, none of this would have happened. Kudos to Jeff for stepping in. None of this happens without him.”

Prior to Gural’s acquisition of The Meadowlands, the number of stallions standing in New Jersey was on the decline. So much so, that in 2013, there were only four in the entire state, resulting in only 74 mares bred and 47 foals born.

“Frankly, we stood Muscle Hill in New Jersey and then, basically, were forced to move him when the sire stakes basically collapsed,” said Klau. “There was no money in there and we moved the horse to Pennsylvania for a couple of years but we brought him back when we thought that the sire stakes were coming back.”

According to the Standardbred Breeders & Owners Association of New Jersey (SBOANJ), there are currently 18 stallions standing in the state, 13 pacers and five trotters.

The numbers of stallions have increased dramatically,” said Mike Gulotta, chief executive officer of Deo Volente Farms in Flemington, NJ. “On the trotting side, in addition to what we have – Six Pack and Propulsion – you have Walner, Tactical Landing and Muscle Hill in New Jersey, so that’s a significant population.

In 2019, the New Jersey legislature passed a bill, which was signed by Governor Phil Murphy, appropriating $20 million, divided evenly between thoroughbred racing and standardbred racing, for five fiscal years to aid purse accounts.

“The numbers of mares bred has been on the incline for five years,” said Klau. “In fact, right before the appropriation was approved by the legislature, just the hint that it was coming increased the numbers.

“More mares are coming. More stallions are coming. It’s been a trend upward, which also is great to show that the legislature was right in supporting our industry.”

New Jersey offers breeders awards, a New Jersey-sired overnight bonus and resident-mare rebates, and on the trotting end, it’s top notch, but both Gulotta and Klau would like to see more elite pacing stallions come to the state to join Lazarus N and Perfect Sting, both standing at Deo Volente.

“If you look at what we have, Lazarus is, of course, a Bettor’s Delight and Perfect Sting is an Always B Miki,” said Gulotta. “So, what would be interesting is getting something in the Somebeachsomewhere line to fill in the diversity of lineages.”

Klau has questioned why Southwind can attract such in-demand stallions as Muscle Hill, Tactical Landing and Walner, but not a pacing equivalent.

The NJSS trotters now have finals for $240,000, up 20 per cent over last year, and with the edition of the New Jersey Classic series for Jersey-sired horses in September, a trotter can stay in the state of New Jersey and race for $540,000. Pacers race for less because there are so many fewer of them.

Lazarus N is currently dominating the 2-year-old pacing NJSS and Gulotta’s looking forward to what Perfect Sting’s progeny will do in a few years as breeding and the sire stakes program in the state continue to rise.

“It’s clearly dramatically improved with the purse appropriation and sports betting,” said Gulotta. “Prior to the advent of those developments there was obviously concern. Things were extremely lean and they’re much, much better now.

“As an example, George Segal and Marty Granoff, who owned Perfect Sting before he was syndicated and they still own a significant piece, they decided they wanted to put the horse in New Jersey because there’s a lot of opportunity in New Jersey and little in the way of competition. There are so many reasons to be more excited today than you could have been even five to seven years ago.”

Each year, the SBOANJ must submit a report detailing how the appropriation was used, but that’s not all they have in the hopper.

“We’re working on putting together a horse industry economic impact study to present to the legislators to give them more of an overview of what else the industry does not only from what the appropriation has done for us as a group but what the industry does within the state and how it adds to the revenue base from taxes and things of that nature,” said Al Ochsner, SBOANJ executive administrator.

Even though 2023 is the last year for the appropriation and a new bill would have to be passed for a new appropriation, listening to Governor Murphy’s own words bring hope.

In an interview at The Meadowlands in 2021 on Meadowlands Pace Night, he referred to The Meadowlands as an iconic track not just in New Jersey, but in America, and said in part: “Conceptually, passionately, we will continue to be there for this industry. This industry is too important. There’s too much at stake, both in breeding, in handle, in jobs, in attendance, in open space. For all the above reasons, New Jersey’s all in in this industry.”