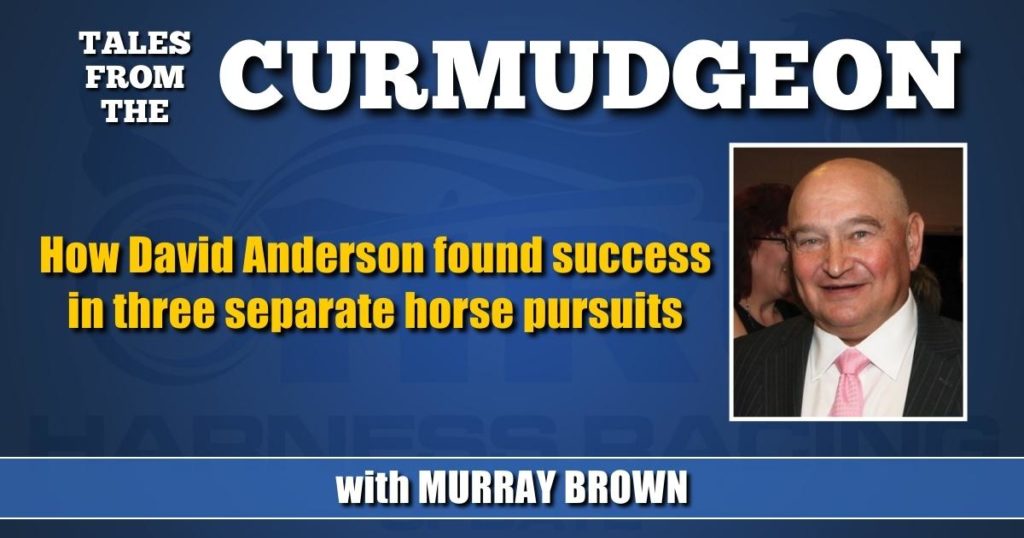 It is somewhere rare for an individual to be at or near the top of one horse breed. David Anderson has achieved that status in no less than three areas of horsedom. He is and for the greatest part of his life has been highly involved in harness racing, thoroughbred racing and with heavy horses — specifically Percherons and Clydesdales.

The former two have proven to be money makers over the long haul, whereas the gentle giants, the Percherons and Clydesdales have mostly contributed to a great feeling of accomplishment and enjoyment in their somewhat limited field of competition. It would certainly be an understatement to say that Anderson has been exceptionally successful in all three endeavors.

Horses were a great part of Mary’s life. While courting her, Bob was in effect told that for the two of them to become a couple he needed to develop an interest in horses. Of course the fact that Bob’s best lifelong friend David Willmot had a huge involvement in the thoroughbred industry was another positive factor leading in that direction.

Bob Anderson quickly rose to a high position in the North American thoroughbred business primarily as a market breeder, but also as a long-time participant in many areas of the hierarchy of the sport. Bob had served as a director of the precursor to the Woodbine Entertainment Group (WEG), the Ontario Jockey Club (OJC). It was David that first piqued his father’s interest in harness racing. That curiosity quickly led to Bob’s involvement in the harness sport.

Where most beginners are inclined to start gradually, Bob Anderson began at or close to the very top. He wanted to acquire the very best and was not disinclined to pay the going rate to acquire them. Among his first purchases were the champion pacing filly Cabrini Hanover(purchased as a yearling for $350,000; earnings of $1,303,790) and the outstanding trotting filly Pampered Princess (purchased for $240,000; earnings of $1,648,362).

For as far back as he can remember, David shared his parents’ love and passion for horses.

This scribe caught up with David speaking from the private 21-acre island that he owns four miles from the Ontario mainland on Georgian Bay.

Q: David, you are the only person that I’ve known who has his own island. How did that come to pass?

“My dad bought the island back in 2000. At the time it was literally a big piece of Canadian Shield rocks with nothing on it. It consists of 21 acres which we subdivided into three seven-acre plots. It has become a wonderful summer place. We built a nice cottage here. I’m able to have excellent coverage of all racing and Internet availability. The weather is wonderful. I kind of feel, I have the best of everything combining both the rural and urban atmosphere.

Q: You are deeply involved in three equine areas, can you please tell us a little of each?

“The thoroughbred farm that my dad started is the breadwinner of the three. It’s located in St Thomas, Ontario, not too distant from London. It consists of 240 acres of excellent land which time has shown to be quite conducive to raising horses. We presently have 30 mares domiciled on the farm managed by our long-time manager and trusted friend Ray Carroll. We have 24 yearlings to sell this year — our largest group ever. They are all by U.S. stallions, but they were foaled in Ontario here on the farm. That enables them to be considered Ontario breds and they are eligible for Ontario stakes racing. We breed to accommodate most pocketbooks. This year’s yearling crop will be sold at Saratoga, Keeneland and the Canadian sale.

Q: In recent years you’ve been fortunate enough to sell million dollar yearlings. How was that experience?

“I would describe it as being almost surreal. In each case, I thought the horses would sell well, but I never allowed myself to think that they might bring that much. The whole experience at Keeneland is just awesome, especially if you are offering yearlings in Book One. You are showing your yearlings to the most prominent owners from throughout the world. Our first million-dollar baby was a Scat Daddy colt named Sergei Prokofiev. We were fortunate enough to have the world’s two most prominent yearling buyers bidding on him. Coolmore prevailed.

“Two years ago, we sold a $1.6 million Medaglia D’Oro filly to Shadwell, another of the sport’s biggest buyers. In each case, I never allowed myself to think either would bring as much as it did. As a small Canadian breeder, it is certainly gratifying when the public has that much confidence in what you are offering.”

Q: How has your standardbred involvement been?

“After dad passed in 2010, we kind of pulled our horns in and got out of the game for some time. I found that I missed the sport greatly — the racing and especially the people. It kept drawing me back in. I changed our game plan somewhat, though. Instead of buying entirely for ourselves, I decided to get into several ownership groups. That has proven to not only be fun, but also rewarding. I’ve been part of groups with Tony Alagna, Nancy Takter and John Bax training for us. We were fortunate enough to win the Little Brown Jug with our maiden pacer Captain Barbossa. What an incredible thrill that was. The only negative part of the experience was that it took place in the midst of a serious COVID outbreak. None of the partners were able to be there to celebrate. That didn’t prevent me from to do so! I cannot remember when I was ever more excited than at the outcome of that race. The Little Brown Jug trophy occupies an honored place among those that our family was fortunate enough to win. Our greatest miss with standardbreds was when we were the underbidder on Greenshoe as a yearling.”

Q: How did you get involved with the gentle giants — the Clydesdales and the Percherons?

“We had a few Percheron nurse mares to mother a some of our thoroughbred babies. They were not only wonderful mothers, but they were also some of the kindest, best dispositioned horses that I’ve ever been around. I fell in love with them and began to acquire some.

“As with most things involving horses, our numbers grew to the point where we probably have more than we should. We now have 50 head. They reside in Iowa under the care of Robert Detweiler one of the finest horsemen I know. Robert was formerly the driver of the famed Budweiser Clydesdales. One of our big boys has been the leading Percheron stallion in North America for 10 years running. We have been fortunate enough to have won multiple World and National Championships with both breeds.”

Q: How involved are you in the administration of your horse holdings?

“I would say quite — to the point where they take up most of my working time. I’ve recently bought a home in Lexington. I would guess that I likely spend five to six months a year there. It is truly the horse capital of the world. It seems as though there is sale after sale there, throughout the year. Of course, in addition to all the thoroughbred sales, there is the Lexington standardbred sale in the Fall. The huge amount of stakes money added to the industry will likely add another dimension to the importance of Lexington as the capital of horsedom.”