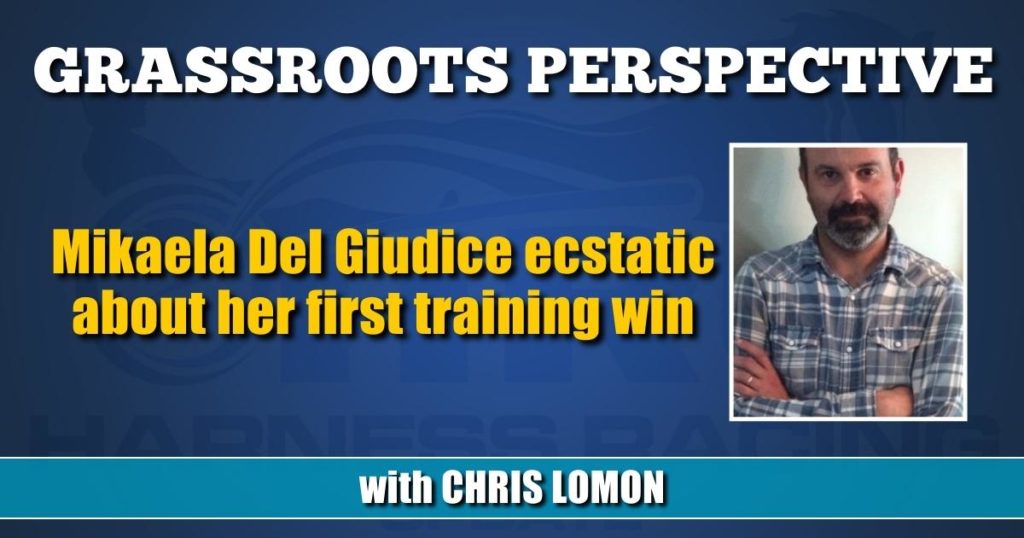 As the field straightened for home in the fifth race on the night of June 28 at Running Aces, it appeared Zanetti, a 6-year-old son of A Rocknroll Dance—Tys Artist, had a legitimate chance to take all the spoils in the pace with a purse of $13,000.

If the bay was going to cross the wire first, the woman who owns and trains the original $21,000 purchase at the 2017 Lexington Sale knew exactly how it was going to play out.

“It wasn’t a very fast time for him,” started Del Giudice, of the 1:54.2 mile “He wasn’t tired after the race. He is one that will not win by more than he has to. (Driver) Nick (Roland) said that as soon as he passed the other horses, his ears went up and he started looking around at the scenery.”

Del Giudice was far more focused than Zanetti, who was bred by Jim Winske and made his debut in the barn of Richard Magee on June 4, 2019, finishing second.

She was also far more composed than any of those who had wagered on the 5-1 gelding.

“It was definitely the most excited I’ve ever been, but I’m always pretty reserved. I was definitely celebrating a lot internally, but I think I jumped up and down, which is the most I’ve ever done at a horse race.”

Del Giudice was still sporting a smile well after the official sign was posted on the tote board.

Over one week after the milestone victory, she still finds herself replaying the final strides to the wire.

“I told my mom a couple of days later that it hadn’t really sunk in yet. Now it has and it’s really special.”

Del Giudice, who works alongside Magee – they have eight horses currently in their barn – jumped at the chance to take over the training reins with a horse she knows well.

Zanetti was a big reason behind the decision by Del Giudice to earn her trainer’s license.

The idea to join the conditioner ranks, however, wasn’t in the works for a long time.

“In around March of this year, I decided to get my trainer’s license, just on a whim. I was out at The Meadows, so I studied and took the written test there. I moved to Running Aces for the season and did my practical here and got everything signed off. It just made sense that I would train Zanetti because I was doing all the work on him. He was making his first start back in a few weeks. He had raced hard at The Meadows, so we wanted to give him a couple of weeks off. He was in an Open 2 and Nick gave him a great drive.”

Becoming part of the racing scene wasn’t a life’s goal for Del Giudice. Instead, it was, at first, a chance to earn some money over the summer months when she was in high school.

In fact, there was a time she didn’t even know what Running Aces was about.

“I grew up right near Forest Lake, Minnesota. Running Aces opened in 2008 and I actually didn’t know what it was for the longest time. Three years later, I was looking for a summer high school job, and I went looking for work at Running Aces. I started out with the DeLong family, worked that summer, had a blast, and then went back for my senior year of high school. I figured that was it. The next summer, Rick Magee was looking for help and I had just graduated. I helped all that summer, and as they say, it just gets in your blood, so the rest is history. I’ve been doing it full time since then. I went to one year of college, locally, in St. Paul, and after that, I transferred to Oregon State, and took my courses online so that I could travel around to race. I got my bachelor’s degree (in Agricultural Science) and I’ve been racing horses ever since.”

Del Giudice’s main goal, in the short term, is working to see Zanetti in the final of the Dan Patch free-for-all race, scheduled for July 24 at Running Aces.

The lifetime winner of 15 races who has banked nearly $200,000 in earnings has a few miles to travel before that becomes a reality.

“It’s coming up pretty fast. He’ll have two races in the open, and eliminations after that, so hopefully, he’ll do well and he can race in the final. That’s our main focus right now.”

Another important key for Del Giudice is in honing her craft.

“I think that was what was hanging me up from getting my trainer’s license. I thought, ‘I have so much to learn, and I don’t know nearly everything yet.’ I finally realized that I’m never going to know everything and that I can learn as much as I can every day. That’s why I decided to go for it. And even though I do have my license, I’m still going to work even harder at learning new skills.”

Horse racing isn’t the only calling for Del Giudice.

She has her own company, Mik Digital Marketing Co., which specializes in harness racing marketing, including sales, stallions, and farms, but also offers a course for small business owners to learn how to successfully market themselves.

“In addition to other individual clients, I also do all of Blue Chip Farms marketing. I’m doing that in my off time. I grew up with riding and showing Arabian horses, which is how I got into horses initially. I have two Arabians and one of my retired trotters who also keep me busy. I ride the Arabians in my spare time, and I also show them too.”

Then there is Zanetti, a horse with undeniable talent, but a penchant for being somewhat unfocused on occasion.

“I think this win meant so much because he has not been an easy horse to get going his whole life. We’ve had him since he was a baby, we broke him, so of course that makes it special to have developed him over time. He just has a lot of quirks and a big personality, which is a lot of fun in the barn. He likes to play and he’s mischievous.

“But he also has his ideas of what he thinks he should be doing on the racetrack and what he likes to look at. He didn’t race at two and at three, people would ask, ‘Is that the horse whose head is all over the track and he’s looking everywhere?’ You would literally see him do that on the track. His head would be straight up, and he’d be looking all over the place during the race, not paying attention to what’s going on. From day one, we knew he had a lot of talent, so it was just a question of working with that. I don’t think we’ve seen the bottom yet, so the goal is to help him reach his full potential.”

Which is why Del Giudice is happy to be the one to focus on every detail, big or small.