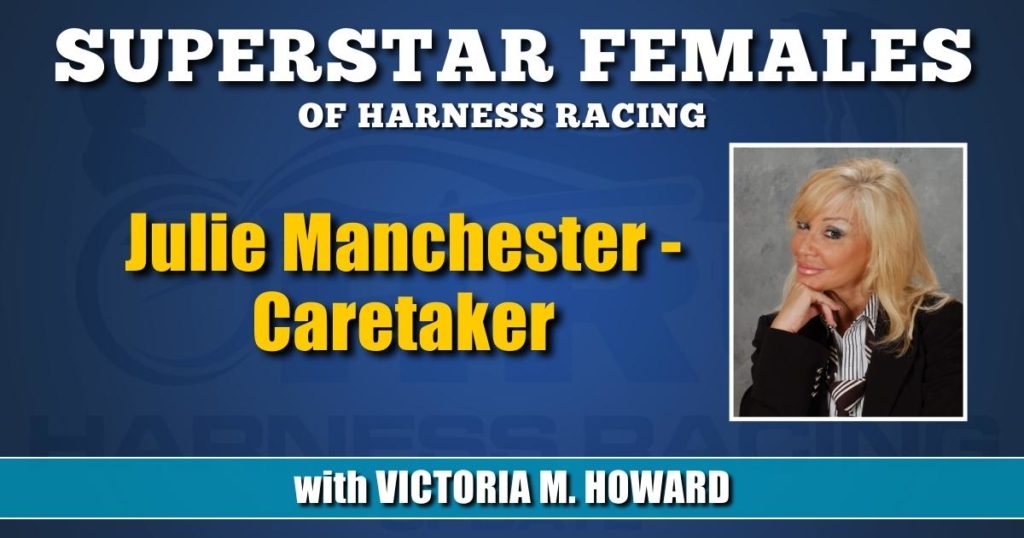 Julie Manchester is a woman who has spent decades getting up before dawn to feed, bathe, rub, and care for her surrogate four-legged children.

“I was born in Fall River, Massachusetts, and have traveled and cared for harness horses as long as I can remember,” Manchester said. “Although my family was not involved in the sport, when I was younger I was a riding and barrel racing instructor and exercised thoroughbreds.

“I guess you could say I was always a free spirit. Beside fast horses, I liked fast motorcycles. Unfortunately, when I was 20 years old, I was involved in a motorcycle accident, which was the factor in my moving to sunny Florida to seek a new career working with harness horses.

“When I arrived in Florida I got a job with trainer Bruce Wienland at the Gilcrest Training Center. I also worked for Herman Ross (who taught me a lot) and Billy Walters.

“Over the years, I worked for some of the sports top trainers, such as Jim Gluhm (Sun Bird Stable), Per Henrickson, Alvin Cummings, Joe Pavia, Joe and Lyndell Adamsky, and Don Harmon.

“I had my children in the early 1990’s so I took a sabbatical for several years to raise my babies. But as they say, ‘Once horses and racing are in your blood it never leaves.’

“In 1997, I was hired by Bobby Williams — who became my best buddy — to help him break babies. Quite a few became Florida champions such as Doc’s Krista. I also worked at Gold Star Farms, helping break yearlings.

“In 2011, I left Pompano and moved to Monticello, New York and raced there until 2015. Along with running my own stable, I got a side job working for Gill, Yonot and Alicica LeFreniere.

“I received several rewards: one was for my claiming pacer, Eadies Desire and another was a training award for my aged trotter, Tyrees Treasure.

“At that time I was married (my married name was Working) and my husband worked for me. After 32 years of marriage, my husband gave me an ultimatum: ‘It’s me, or the horses!’

“Well, guess who won. He’s not around.

“I worked for trainers Danny Gill and Frank Yanoti before moving to Florida. This is about the time I decided to venture out on my own and try my hand in training, and had a very modest stable of mostly Florida breds.

“After I got divorced I started working for trainer Rod Allen at the Golden Cross Stable in Ocala, breaking and training horses.”

Anyone in the business will tell you having a career in harness racing can be very difficult if you’re married. The long hours, little time off and traveling with your horse periodically takes a toll. Unless the man and woman are both involved, sadly, many marriages end in divorce.

“This was one of my favorite times until 2019 when my health took a turn and I had to stop. I moved back to Massachusetts to be near my family, and began giving riding lessons to children on Cape Cod.

“I really missed the business so when Bobby Williams called in 2021 and asked if I wanted to work for the Luther Stable, I said yes.”

Presently, Julie is working for the red hot Luther Stable and cared for the superstar mare Katie’s Lucky Day last winter. In May, the 4-year-old trotting mare was victorious in the Graduate Series in a sizzling 1:50 career-best clocking. The daughter of Uncle Peter by Yanksky took home the top prize for owners Black Magic Racing LLC and Patrick Hoopes. It was the fastest trotting mile by any horse in North America in 2022 by one full second.

“I’ve not cared for Katie since this past April for she is in the racing barn and I’m now in the baby barn, but Katie and I have a connection and close bond. She loves her peppermints and I was a very proud mama when she won the Graduate Series in a sizzling 1:50. Wow!”

“It never gets old working with these horses. Probably the most enjoyment for me is seeing the babies come out of the fields and go to kindergarten through college. To be able to watch them become the amazing athletes they are is what it’s all about.

“I truly admire all the horsemen and horsewomen who still dream about having a champion. Getting up at 5 a.m. to wash feed tubs, feed the horses, clean stalls, harness and brush the horse, race into the late hours and get up and do it all again. These are the true superstars in the sport.

“I’ve been blessed to have met so many wonderful people who have treated me well and was fortunate to care for all these great equines. I believe God gives everyone a talent and special gift and my gift is working with horses.”