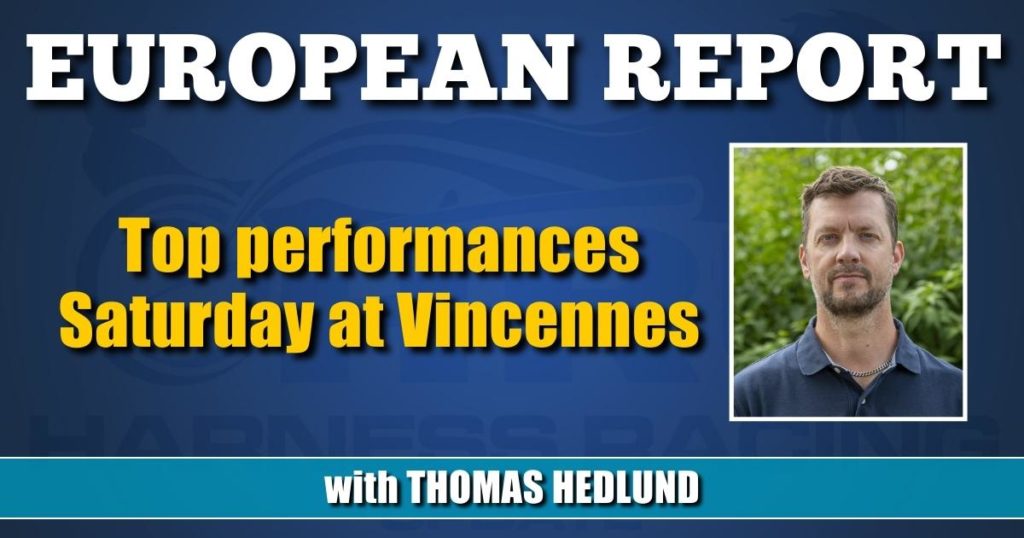 Paris track Vincennes played host to a really nice race card on Saturday (June 11) afternoon and when the French bred 4-year-old colts battled in $125,000 Prix Jules Thibault, the racing fans witnessed an exciting rumble between two of the best horses in the crop.

Thierry Duvaldestin-trained Idao de Tillard in the lead, Izoard Vedaquais (Bird Parker) on the outside and these two would fight side by side during the race’s last kilometer.

Izoard Vedaquais, trained by Philippe Allaire, started his career with 11 consecutive wins and seemed to be the king of the ”I-horses” in France. But at the end of last season, roles changed and Idao de Tillard wanted to be on top of the mountain.

Izoard Vedaquais disarmed leader Idao de Tillard just ahead of Vincenne’s wire and both the winner and the runner up came home in a great mile rate of 1:55.2 over 2,700 meters (approximately 1.6 miles).

The 4-year-old mares had $125,000 Prix Guy le Gonidec to look forward to and first choice Idylle Speed (Carat Williams) consolidated her position as number one in the crop since she put her nose first after a perfect trip served by Jean-Michel Bazire. Bazire pushed Idylle Speed to front position after a mile, but opted a pocket trip and later first over, from where she proved best in mile rate 1:58.

The $125,000 Prix Chambon P collected a strong field of trotters at Vincennes on Saturday (June 11) afternoon and Fabrice Souloy-trained Gu d’Heripre (Coktail Jet) played with his opponents from the lead since driver Jean-Philippe Monclin was allowed to keep the pace at a 2:04-level the first mile.

Elie de Beaufour finished strongly as runner up, but had no chance to challenge Gu d’Heripre at the home stretch and the winner came home in a mile rate of 1:59.2 over 1.7 miles. Prix d’Amérique runner up Galius made his comeback after four months away from the tracks and he finished third.

Philippe Allaire’s Hohneck (Royal Dream) impressed from the lead in the $125,000 Prix Jean le Gonidec for 5-year-olds. Driver Francois Lagadeuc stepped on the gas pedal in the last turn and Hohneck left the rest of the field and came home in mile rate 1:54 over 1.3 miles.

Alessandro Gocciadoro and his Vernissage Grif (Varenne) showed up in Östersund, Sweden and impressed when the duo claimed the $140,000 Jämtlands Stora Pris for the older elite over 1.3 miles.

From post 10, Vernissage Grif ended far back in the field as Click Bait hit the lead with hard pressure from outside trotter Selected News. First choice Mister Hercules went off strid on his way to the lead in the first turn and the real show started at the back stretch, when Alessandro Gocciadoro made his move with Vernissage Grif, four wide. Vernissage Grif had to continue far outside throughout the last turn.

When Millindollarrhyme took control at the top of the stretch, Vernissage Grif attacked once again and Alessandro Gocciadoro reach both his hands in the air and applauded the horse and the fans that showed up in Östersund. The chestnut 8-year-old defended the title in Jämtlands Stora Pris and mile rate was 1:57.

SET FOR BATTLE IN OSLO

The $250,000 Oslo Grand Prix over 1.3 miles is on the schedule at Bjerke racetrack in Oslo, Norway today (June 12). The Oslo Grand Prix-day at Bjerke is traditionally one of the more exciting events in northern Europe during the hectic spring and summer season and it’s quite an interesting field Bjerke has gathered this year.

Canadian Elitloppet contender Perfetto, who was a solid fifth in his elimination at Solvalla, will try again among European trotters, but Dagfin Henriksen’s trotter drew number 8 behind the gate and Perfetto is probably not one of the hottest contenders in the race.

Björn Goop got an Elitloppet invitation with his San Moteur, but chose not to race at Solvalla. San Moteur will instead face the older elite as a probable first choice on Sunday, as he will start from post 6.

The home team will primarily put its hope to Geir Vegard Gundersen trained Cicero T.G. who comes from a strong runner up performance behind San Moteur.

It’s a quite young field that chases the prestigious trophy at Bjerke today and the youngest trotter in the field is American bred Seven Nation Army, who makes his third start on European soil.