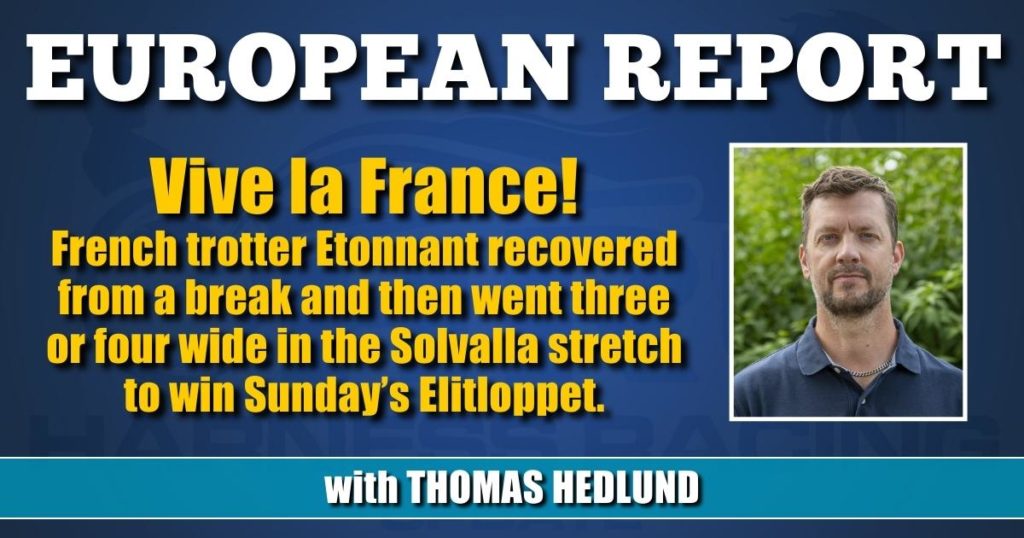 There were some question marks surrounding France’s Etonnant (Timoko) ahead of the start in Sunday’s (May 29) $1,015,000 Elitloppet at Solvalla. Would the big-gaited trotter get along with a 5/8 mile track? Would he even be behind the gate as the car accelerated? Etonnant came to Stockholm with a history of problems behind the gate in French races, so post 7 in his Elitloppet elimination was not too bad for him.

Trainer Richard Westerink’s trotter ended up fourth in his elimination, an elimination where title defender Don Fanucci Zet impressed a lot via a first over trip in 1:51. Yet, Etonnant, driven by Anthony Barrier, clearly was ready for the final.

The second elimination was quite spectacular when leader Night Brodde was beaten in the end of the last turn by Hail Mary and Vivid Wise As attacking three wide. Behind Hail Mary — who was strong in the last half mile despite racing three wide — followed the bettors’ last choice, Mister F.Daag, who sprinted to a safe win in 1:51.1.

For the final, Etonnant drew number 7 again, while Don Fanucci Zet got post 1 behind the gate. The latter went off stride as the car left the field and Click Bait (runner up behind Don Fanucci Zet in the elimination) opened quickly for the lead. Driver Ulf Ohlsson was determined and opted to drive in front when Erik Adielsson was poised to taked over the lead in the first turn. Click Bait in front, Hail Mary on the outside and after a quarter of a mile, Matthieu Abrivard left his position in third over with Vivid Wise As (third in his elimination), in hunt for position first over. And Vivid Wise As landed outside the leader with a half mile remaining, but the most remarkable situation was just before when Etonnant tried to follow Vivid Wise As three wide throughout the turn. Etonnant lost his gait for a moment, made a break and lost position and valuable lengths, but still attacked three- or four-wide in the last turn, following Önas Prince who had attacked from third over with 600 meters to go.

Önas Prince went off stride in the end of the last turn and at that point Hail Mary found his space to sprint over Solvalla’s home stretch. For a moment, Hail Mary was in control of the race, but from far outside Etonnant finished strongly and Barrier made trainer Westerink a three-time winner of Elitloppet.

The race was exciting and Etonnant was a worthy winner, no doubt about that. One of France’s best horses showed that he could master different conditions, compared with what he is used to in his home country.

Etonnant finished the mile in 1:51.3. Hail Mary was second and Mister F.Daag third.

”I’m so happy to be here today. This is one of my greatest experiences I’ve had in the sport and the horse was very good. He did all the things I asked of him, even if he had some problems in the turns here at Solvalla”, said Barrier after the victory.

Elitloppet 2022 became successful, with a big crowd returning to Solvalla after two pandemic years. The atmosphere was tremendous.

So many powerful performances by so many great horses made this weekend memorable, as usual.

Dutch trainer Paul Hagoort experienced one of his best days at the racetrack when he took all top three places in $205,000 Breeders Course final for 3-year-olds, open class.

Diapason, trained by Hagoort, came to the lead and from second over, Hurricane (Father Patrick) attacked three wide with 650 meters to go in the 1.3 miles long race.

Hurricane battled against leader Diapason and defended himself strongly when third stable mate Monastery Boko attacked at the top of the stretch. Hurricane held on and won in a mile rate 1:57.2. Robin Bakker sat in the bike behind the winner and the duo Hagoort-Bakker are well known for the Swedish harness racing fans nowadays, since May has been a very successful month for the Dutch duo.

The $81,500 Breeders Course final for 3-year-old fillies was won by Jerry Riordan-trained Dea Grif (Varenne) driven by French top driver Matthieu Abrivard, who seems to have Swedish racing in his blood, because he made zero mistakes behind Riordan’s horse.

Dea Grif was placed in second over and Abrivard waited until the top of the stretch before he left his cover. First over trotter Don’t Say Gar disarmed leader Dotothea Mil, but couldn’t defend herself when Dea Grif sprinted to easy win in 1:54.3.

Allaire a winner in Fyraåringseliten

From post 2 behind the gate, Guzzinati sent Callmethebreeze to the front and in that position, the Italian-bred trotter had everything under safe control. Callmethebreeze sprinted to a safe win in 1:53 ahead of a very strong finisher in Invictus Madiba.

Callmethebreeze was an early talent and Philippe Allaire started his horse in Italy when the horse was 2-years-old and throughout the career the Trixton son has battled against the best in the crop, both in Italy and France.

Stefan Melander-trained and Stall Courant-owned Imhatra Am (Muscle Hill) had a nice wire to wire win in the $62,000 Delicious’ race for 4-year-old mares at Solvalla.

Mats E Djuse was eager to hit the lead and his horse answered to the commands she got from the driver. When first choice Shirley Goodness had to face a first over trip, Imhatra Am had the race in control and she left the opponents in the last turn. The well gaited Muscle Hill mare came home in 1:54.