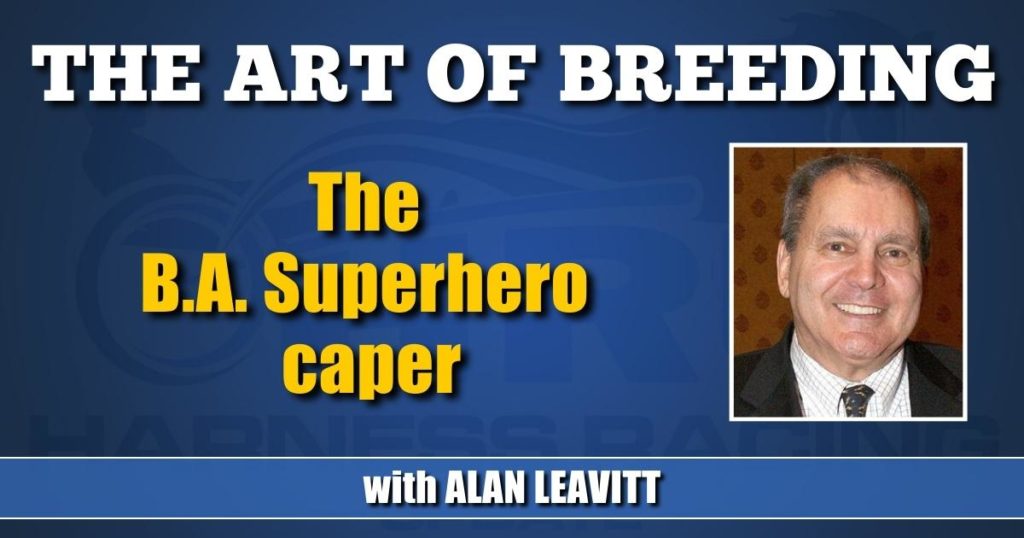 An article about B. A. Superhero, a 3-year-old trotter, and his owner, Mrs. Patty Key, caught my interest for a couple of reasons.

I knew Mrs. Key’s late husband, Bob, fairly well through the years, both socially and as a buyer of our yearlings during my Lana Lobell days. B. A. Superhero’s pedigree is an interesting study in Inbreeding, properly done.

Again, for those with short memories, Inbreeding occurs when the sum of the generations in which the same name appears twice is six or less.

When the sum of those two generations is seven or eight, you have Line Breeding.

When no name appears twice for the sum of those generations to be eight or less, then that horse is defined as an Outcross.

One further note about Inbreeding, which I advocate, but with an important proviso; you should only inbreed with superior individuals. Never forget that when you breed close, you’re enhancing two essential qualities, i.e. conformation and speed.

Parenthetically, the USTA commissioned a study of the American Standardbred’s genotype, by Dr. Rebecca Bellone. She reported that she found no loss of heterozygosity, which is the variability factor. As a practical consideration, when the variability factor begins to be lost, the first manifestation is a loss of fertility in stallions.

Although no one, including Dr. Bellone, has any interest in the research I’ve done for years, my analysis of hundreds of five generation pedigrees has shown me that there is virtually no inbreeding today in the American Standardbred.

However, the pedigree of B. A. Superhero tells a different story. He is inbred, 3 by 3 to American Winner, a horse this kid had a little something to do with.

Bob Key was a smart yearling buyer, and he showed it quite vividly when he came to one of our Lana Lobell sales and bought a filly out of Matina Hanover. He renamed her B.J.’s Pleasure, won almost a quarter of a million with her, then bred her to Super Bowl and got the Hambletonian winner American Winner.

There’s a little story that goes with Matina Hanover. Jim Harrison was running Lana Lobell for me, and one day he called me in New York.

“I bought a mare today, even though she’s not all that well bred,” he told me. “But she was a good race mare on that half-mile track at Buffalo, and the guy took a $12,500 yearling credit.”

That was Matina Hanover. Jim downplayed her breeding because her first three dams were duds at the Shoe Farms when Jim was running it. But her fourth dam was Miss Bertha Hanover, one of the great sisters who were the basis of the Hanover’s original claim to breeding greatness.

B.A. Superhero is sired by Muscle Hill, and out of Win Missy B, by Conway Hall. Both of those two stallions, Muscle Hill and Conway Hall, can best be described genetically as “high card horses.” I’m talking about translating a horse’s genetic range to a deck of playing cards, with a low card of two and a high card of ace.

Both these two great sires have a speed gene that probably starts with a ten or even a Jack and goes up from there.

So in every mating, for their 50 per cent contribution they bring, say, a face card. Assuming the mare contributes a mid-level card, say a seven, the average with still be high enough to result in a nice trotter, although not a star.

But if the Mama can pull out a better than average card, you’re looking at stakes speed potential. And just as great sires like Conway Hall or Muscle Hill can be blessed with a genetic speed deck that holds only high cards, so can a great producer like Matina Hanover.

Here we’re talking about what is technically a horse’s Genotype, it’s genetic profile. It has no connection whatever to the horse’s Phenotype, which is the living horse and includes its racing performance.

But here I know I’m shouting in the wilderness, because since Fido was a glean in his furry father’s eye, there has always been a premium paid for fast mares with good earnings as future broodmares.

So that, as we say in the detective trade, is the B. A. Superhero caper, and I wish Mrs. Key the best of racing luck with him.

On other fronts, two quick words. I’ve read about some problems doing embryo transfers with top race mares while they’re still in training. A better approach would be an Intracytoplasmic Sperm Injection, or ICSI.

It is a much surer method of getting a foal, and it can be exactly scheduled. You simply allocate 18 days in February, and, Viola, mission accomplished.