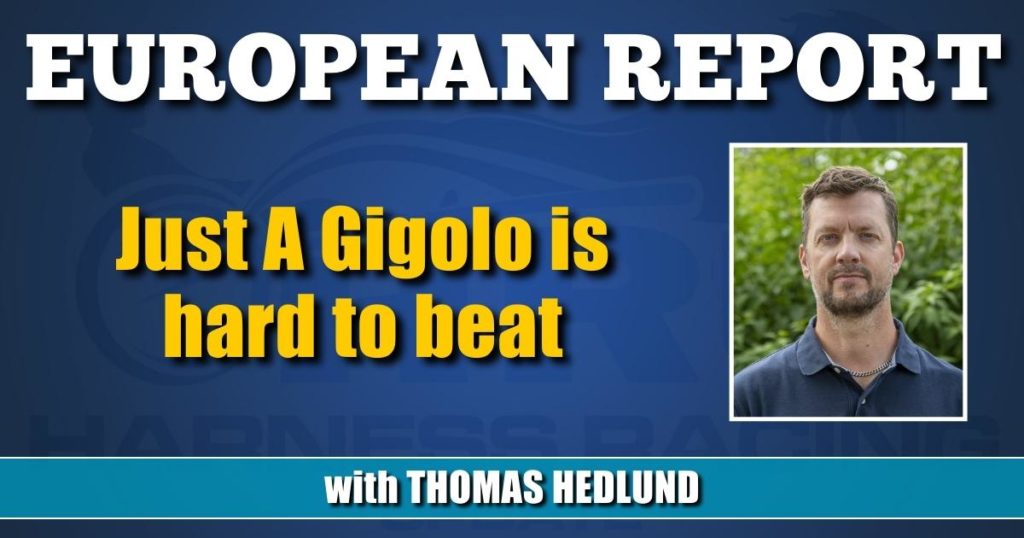 Just A Gigolo is hard to beat

Philippe Allaire-trained Just A Gigolo (Boccador de Simm) continues to establish his position as number one in the French ”J-crop”, the 3-year-old colts and paired with Franck Nivard, the charismatic trotter played with the opponents in Vincennes’ $125,000 Prix Paul Karle on Friday (May 13) night.

Just A Gigolo was positioned second over after 500 meters, but when three quarters of a mile remained in the 1.6 miles long race, Nivard pushed his horse to the lead and then the game was over.

Just A Gigolo is pleasant to watch on a racetrack and he seems to have several abilities that’s required to become a top trotter. There’s no doubt that he already is a star in France, but it’s not easy to take the steps that’s needed to be competitive among older trotters in the future. The son of Boccador de Simm landed a 1:59 mile rate over 2,700 meters and Franck Nivard must have had a nice trip behind Philippe Allaire’s horse.

This was Just A Gigolo’s 8th win in his 10th attempt and the future looks bright for the entourage around the good looking 3-year-old.

The 3-year-old fillies battled in the $125,000 Prix Masina, even if the word battle is everything but correct to summarize the race. First choice and the crop’s dominant Jazzy Perrine (Django Riff) jogged three wide throughout the first turn and on the stretch ahead of the grandstand while the pace was ridiculously low in front. Eric Raffin glided toward the lead after a kilometer with Jazzy Perrine, but soon thereafter the duo had to let outside horse Joke to the lead. And the pace continued to be very low, so when the field turned into the last turn and Jazzy Perrine still was looking for racing room in the pocket, it seemed hopeless for the favorite.

A magician’s act by Raffin over the stretch resulted in Jazzy Perrine attacking on the inside of leader Joke and shortly ahead of the wire the favorite was first.

Preparing for the Elitloppet at Solvalla in two weeks, Richard Westerink’s Etonnant (Timoko) showed that he’s in top shape when he claimed the trophy in the $157,500 Prix des Ducs de Normandie in a sunny and warm Caen on Saturday (May 14) afternoon.

Anthony Barrier was eager to hit the lead early into the race while first choice Cleangame and Jean-Michel Bazire had to work on the leader’s outside.

Etonnant defended himself nicely over the long home stretch in Caen and reached the wire in mile rate 1:55.1 over 1.5 miles.

BACK OF THE NECK OUT OF ELITLOPPET

Ake Svanstedt has told Solvalla’s Anders Malmrot’s that Back Of The Neck is not coming to contest the Elitloppet due to
a lacklustre qualifying performance Saturday (May 14) at
The Meadowlands.

Meanwhile, Sweden’s Whos Who has been invited.