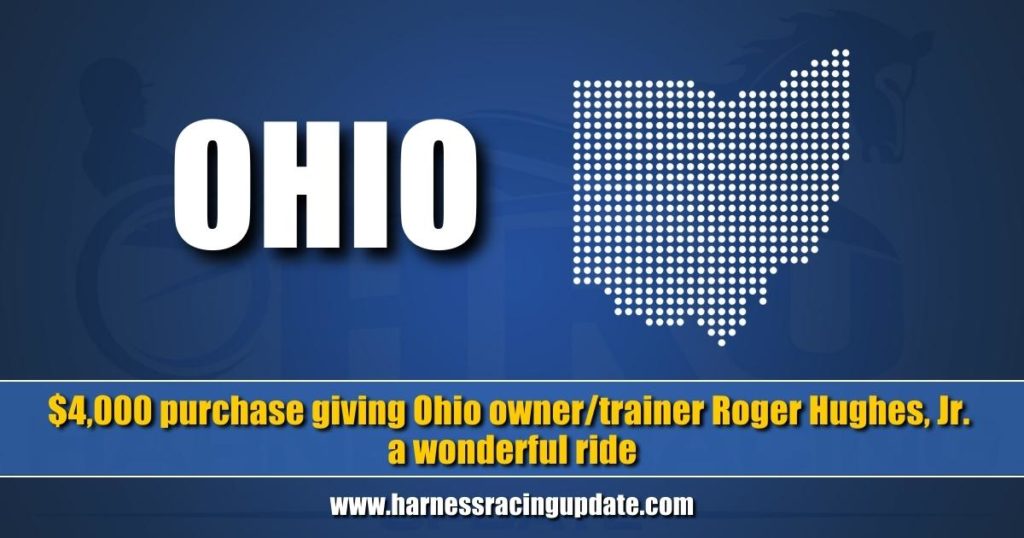 Ohio-based owner/trainer Roger Hughes, Jr. was just looking for one more horse to complete his stable. What he found was ‘resilient’ trotter Sultan Of Cash who has overcome soundness issues to earn nearly $225,000.

The now 7-year-old gelded son of Cash Hall recently established a new lifetime mark of 1:54.3 (May 1 at Miami Valley Raceway) and once again proved the toughness of the standardbred breed.

Hughes was looking for a trotting colt in the fall of 2016 to round out his yearling purchases. It was at the November Blooded Horse Sale that Hughes came across hip #224 – the seventh foal from the unraced Conway Hall mare, Anything But Love.

“I had already purchased a trotting colt and a pacing colt earlier that fall,” said Hughes. “I couldn’t make it to the sale, so I called a friend and ask if he would look at him for me. He thought he was put together nicely and he would probably bring good money.

“I had a budget of what I wanted to spend, so I gave him a number to bid to. I was watching him sell on my computer at work and he only brought $4,000.

As a 2-year-old, Sultan Of Cash, who was known as ‘Johnny’ around the barn, started his season with impressive wins at the Pickaway and Putnam County Fairs with Hughes in the bike.

“I was getting calls from people wanting to buy him,” said Hughes. “I turn them down because I wanted to race him a few starts.”

Hughes and Sultan Of Cash would then turn their attention to the Ohio Sire Stakes program.

With the larger stage, Hughes was presented with his first problem – who would drive Johnny?

The first OHSS leg at MGM Northfield Park, Wrenn gave him a perfect pocket sitting trip to score a one-length victory in 1:59.3.

The pair’s next two starts came at Eldorado Scioto Downs in the second OHSS leg and the Ohio State Fair Stakes – both wins, the fastest in 1:57.1.

“This time it was a very difficult decision to make because of the dollar amounts being discussed,” said Hughes. “I talked it over and decided to keep him and continue on the great ride we were having.”

The third sires stake leg was a gate-to-wire win in another sub 2:00 effort.

Sultan Of Cash missed the final OHSS leg at Northfield Park due to sickness.

He recovered in time for the $250,000 Ohio Sires Stake Final on Labor Day weekend at Scioto Downs. Sent off as the betting favorite, the undefeated Sultan Of Cash would finish fourth in the rich final – 3 ¼ lengths behind the future world champion and millionaire, Mission Accepted.

After a solid win in the $42,000 Ohio Breeders Championship at the Delaware County Fair, Johnny was shut down for the year with seven wins in eight starts and $126,515 in earnings.

Johnny’s sophomore season was supposed to be full of promise, but that is when soundness issues started to appear.

A ho-hum qualifying effort was followed up with a trio of second place finishes in the James Hackett Memorial (elimination and final) and the Scarlet and Gray Invitational at Miami Valley Raceway.

“I had several different vets go over and work on him and he still just wasn’t 100 per cent,” said Hughes. “He would get steppy late in the mile, so we continued to try and find what the issue was. We took him to Ohio State (University) to have scans ran and they found a couple of hot spots, so we had them worked on.”

Sultan Of Cash won the opening leg of the Ohio Sire Stakes and was a game third in the second OHSS leg a month later at Eldorado Scioto Downs.

Despite those solid performances, Hughes knew things with his colt weren’t right.

“I had another vet look him over and they didn’t find much, maybe a hind ankle bothering him,” said Hughes. “So, we injected his ankle and raced him at the Putnam County Fair where he won, but he still just wasn’t right.”

A couple of days after that win, his injected ankle swelled back up, warranting a return trip to OSU’s Galbreath Equine Center.

“They conducted several procedures and tried different types of antibiotics, but it just wasn’t taking care of the infection,” said Hughes. “They finally got the infection under control and decided they had to go in and take part of his sesamoid bone – taking part of it from each side and part of the tendon with it.

“There was a discussion that it might be in his best interest to euthanize him. I wanted to do what I could to save him, even if that meant he would just become a pasture pet.”

Sultan Of Cash spent nearly a month at OSU.

“We would walk him up and down the barn to get him to move,” said Hughes. “Once the cast was removed, we started walking him around the fairgrounds, further and further each week.”

Johnny was turned out to give his ankle ample time to heal.

Hughes brought Sultan Of Cash back in April 2020 to start his long road back to the races.

“We started out very slow to build up his muscle tone and just continued from there. We started training him and everything seemed to be going well. He was training down nicely and not getting sored up.”

The two-year comeback was complete when Sultan Of Cash was entered in the $4,980 Signature Series event at the Mercer County Fair on August 16, 2020 – a third place finish in 2:02.

“We tried an overnight race (at Hollywood Dayton Raceway), but he was interfered with,” said Hughes.

“We decided to turn him out again for a few months and bring him back to race around the fairs.”

His 6-year-old season started in the $900 open trot at the Pickaway County Fair.

Hughes originally asked his sister, Michelle Caldwell, to drive but she ended up giving the duty to Jeremy Smith. Smith steered Johnny to a 15-length win in 2:04.1.

“That was a very good day,” said Hughes. “He was never supposed to race again. We continued to make (fair) starts with him through the summer, picking up checks and another win along the way (Shelby County Fair with Michelle in the bike).”

Sultan Of Cash would finish the season racing his way through conditioned events to the $28,000 open trot at Dayton Raceway, establishing a new lifetime mark of 1:55.2.

This season, Sultan Of Cash has made six starts, missing the board just once. He has earned more than $21,000 and lowered his career mark to 1:54.3.

“I’m grateful to Allen Woolums, who helped me train and gate him, Michelle (Caldwell) and the staff at OSU,” said Hughes. “Their work and dedication were great.”

“This story goes to show you how resilient the standard breed is. These horses can overcome a lot of adversity if given the chance,” said Hughes. “This horse has been a very special horse for my family and myself. For me, I’m sure there will never be another one like him.”