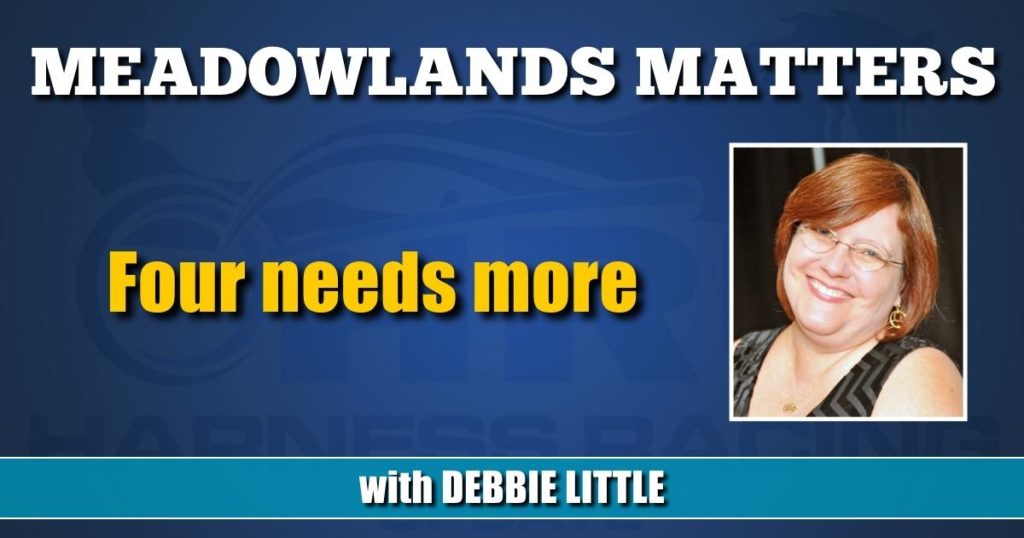 Prominent industry members weigh in on the need for more stakes for 4-year-old mares.

If the sport really wants to keep its 4-year-old stars on the track, it needs a plan.

Thanks to Meadowlands’ president/chief executive officer, Jeff Gural, 4-year-old mares now have a Graduate Series of their own.

On Saturday (May 14), those races will be featured on the “America’s Day at the Races” broadcast with Churchill Downs on Fox Sports 2 from 9-11:30 p.m.

“Last year, I would have loved it, because I think it would have helped my fillies take the step into being 4-year-olds then,” said trainer Nancy Takter. “And I think maybe in the long run they would have had better seasons last year if I didn’t have to race them against open mares right away.

Meadowlands’ race secretary Scott Warren thinks those numbers should increase moving forward, especially since the addition of these races were not officially announced until Dec. 31, when retirement decisions may have already been made.

“There’s a chance they might stay around for another year,” said Warren. “I think you would see, especially on the mare’s side, more of them staying on the track rather than going to the breeding shed.”

Looking at the sport’s stakes calendar, the number of races limited to 4-year-olds are exactly that – limited – and even more so when it comes to mares.

Owners are appreciative of Gural’s efforts, but would like to see more from the rest of the industry.

The issue appears to be twofold. Too few races for mares and half the purse amounts of their male counterparts.

“It’s actually a little bit depressing when you race just as hard or you have a faster mile and you race for less money,” said owner Michelle Crawford. “Why do you think we have to have the conversation with [trainer] Ronnie [Burke], ‘Are we racing the boys or are we racing the girls?’ You want to race the boys because there’s more money.”

The mare Graduate races played a small part in Crawford choosing to bring back Beltassima for her 4-year-old season.

Beltassima is currently in foal to Captain Corey, via embryo transfer using Dawn Shooter as the transfer mare.

“We really were going to retire her to broodmare status and we just thought because of the Kentucky races and some of the bigger track races, we were going to try her and see how she came back with no real guarantee,” said Crawford. “She’s a big, beautiful mare, just drop-dead gorgeous and she does have a lot of potential.

“A lot of the stock drops off as 4-year-olds because they just can’t compete at 4. So, they’re racing the boys, or they’re racing way over their heads when they can get in.”

Owner Mel Segal and his partners brought back the reigning Horse of the Year, Test of Faith, but it wasn’t a guarantee they were going to do so.

“[Trainer] Brett [Pelling] wanted to race Test Of Faith as a 4- and 5-year-old,” said Segal. “That’s what he told us he’d like and we went along with him this year. I don’t know about next year. Maybe if she’s racing good. It all depends on her. I don’t want to see her getting beat by older mares. It’s awful tough for a 4-year-old going against aged mares.

“I’m not crazy about racing against aged mares all the time. That’s why a lot of the fillies retire after 3, because they have to race against aged mares. But I think if they did have some more 4-year-old races, it would certainly help the sport some, because if it wasn’t for the Graduate, I don’t know if we would have been racing this year.”

Sam Bowie, owner of Hot Mess Express, always planned to bring her back at 4, but at the same time greatly values the addition of the Graduate races.

“I’m very appreciative as an owner to know that this series was established this year,” said Bowie. “It made the decision that much easier because I had numerous inquiries from people who wanted to purchase her and breed her. So, when they announced that they had this series for 4-year-old pacing mares, I was elated.

“There will come a time, obviously, when I’ll breed her but I had always told [trainer] Tony Alagna that if she was sound and didn’t have any hiccups, I intended to race her back as a 4-year-old.”

Takter had an innovative suggestion regarding how to create more 4-year-old races.

“If we want to keep 4-year-olds on the track, we have to give 4-year-olds races that they can race in,” said Takter. “Personally, I think some of our 3-year-old races could be turned into 4-year-old races, especially for the male pacers. There’s no reason why they have as many big stakes races as they have throughout the summer. It’s actually crazy and it would have been nice if some of those races were 4-year-old races.

“I think that a 3-year-old pacer can race eliminations and finals something crazy like 10 weeks in a row for races that go for $300,000 or more all summer. There’s nobody that can race in that many races. Obviously, in some sense, it’s good because people get to pick their spots and try to avoid each other a little bit, but if we want to keep horses on the track, we need to give them opportunities to race.”

It’s long been an explanation in this business that the reason mares race for less is because there aren’t as many of them. Perhaps it should be considered that the reason that there aren’t as many of them is because they race for half as much as the boys. It’s also been pointed out that staking payments for mares are less than their male counterparts. So, why not charge them more and pay them more?

“I think it would keep a lot of the 3-coming-4 on the track racing,” said Segal. “Look with Test Of Faith, I’m no youngster anymore and I’m looking for some of her offspring. And I’m guessing that’s what some other people do, too. I think it would help if they added a few more series for them. That’s just my opinion.

“It’s a shot in the arm for the fans bringing back a good
2- and 3-year-old. It’s amazing the people that are following her. I didn’t think that there would be, but a lot of people like watching her race.”

Crawford has had many horses come back as 4-year-olds and understands what a difficult transition it can be.

“Because they’re tweens,” said Crawford. “It’s nothing different than having a 13-year-old boy. He can dominate against the 11- and 12-year-olds now, but he’s going to get crushed against the 14- and 15-year-olds.

“Why can’t we make changes to make sure that these well-bred fillies are going to be able to race throughout their career instead of just a very short 2-to-3-year-old campaign?”

As a fan of the game, Bowie enjoys seeing a great 3-year-old come back and continue to entertain the public as a 4-year-old and 5-year-old.

“The interesting thing is, when you talk to the gurus of the breeding industry, the vast majority will tell you that it’s the mare that’s most responsible for the success of the offspring,” said Bowie. “And yet the mares get compensated half as much on the track for the same races.

“If you can make it feasible and throw a carrot to the 4-year-olds where it allows the owners an incentive to race them as aged horses, I think it would be great for our industry.”