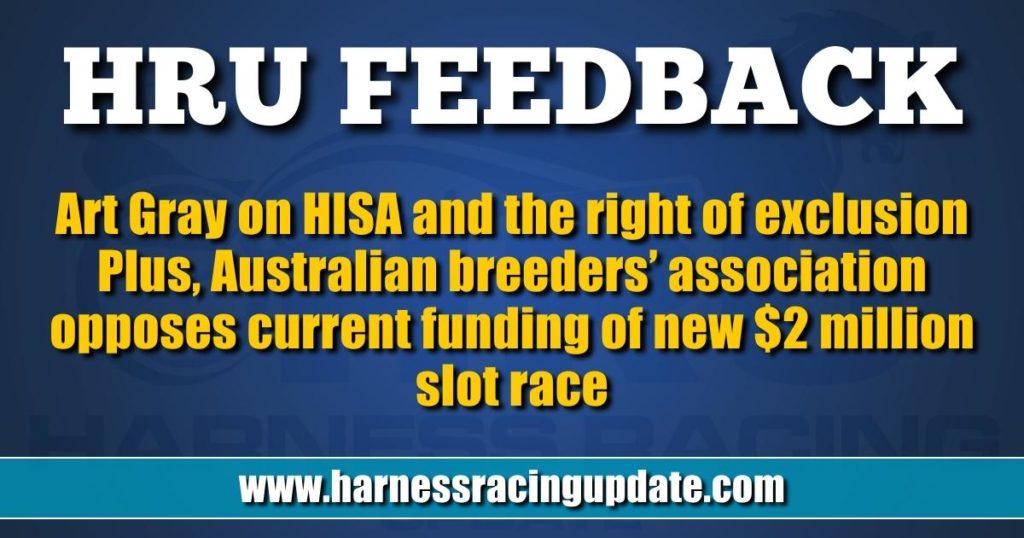 The Horseracing Integrity and Safety Authority (HISA) is a welcome diversion from the status quo solutions that have failed to revive harness, thoroughbred and quarter horse racing. As racetracks utilize their right of exclusion, a before unseen formidable duo will enhance our public perception. Bob Baffert`s exclusion from Churchill and NYRA constitute a seminal precedent for a racetrack’s right of exclusion.

The malignant combination of inefficient suspect regulation and trainers with the wherewithal to exploit the system have exacerbated our already poor reputation. Recent notorious commission transgressions have poured fuel on our already public perception bonfire.

The California Horse Racing Board contributed when it surreptitiously deviated from protocol and the rule book in allowing an ineligible horse to participate and win the Kentucky Derby leading to a $75 million syndication).

The Pennsylvania Horse Racing Commission augmented our fans ire when attempting to conceal an illicit drug positive in a $275,000 harness stakes race directing the steward/presiding judge to defer any penalties. When he refused, he was fired.

These recently released documents indicate stewards/presiding judges hiding evidence, discrimination, gambling, and preferential treatment when entering horses just to name few issues. I imagine as with all these sins of racing a finger of blame will be directed at others without any effort to mitigate or remediate the unethical activities of these regulators.

The fact that most regulators are inexperienced political appointments with obvious inclinations to obfuscate their responsibility is a given we can no longer tolerate. Racetracks utilizing their right to exclude any licensed individual that does not comport with their best business interest is an absolute. The right of exclusion should not create an adversarial relationship with our regulating agencies. This racetrack house rule is a tool that regulators do not have in their tack box. Quite simply, the policy complements their regulatory obligations. Kudos to Churchill Downs and NYRA for utilizing their right of exclusion. The Horseracing Integrity and Safety Authority combined with an expansion of the right of exclusion can enhance our waning public perception.

The bottom line… the status quo cannot continue! Our regulatory system is seriously flawed allowing miscreant trainers to ply their trade. The Horse Racing and Safety Authority is a step in the right direction albeit the racetracks must step up if we are to reverse our poor public perception.

First let us make it very clear that Australian Breeders and participants in general do not object to a harness Slot Race being run in Australia (or anywhere) for $2 million or any other amount. Many don’t see the point of having “the world’s richest race”, but are not opposed to those wanting to participate. They do universally expect that slot holders fund the race from which they reap benefit. This is not what is happening – two separate actions that will extract over $1.7 million per year from Australian breeders are being implemented.

Across all States of Australia there is a unanimous view of breeding bodies, based on their breeder responses, that the TAB Eureka, or any similarly proposed race, should not be funded by breeders through implementation of a tax or levy or tariff or call it what you will. The view in fact is well supported across the whole gambit of participants including owner organisations, who are aware it will most likely impact their prices and the quality of their purchases. Clubs also expect an impact from the reduced sponsorship they are likely to receive from Studs and stallion owners. Even studs who stand locally based sires expect a negative outcome – they need to attract owners to breed their mares to both resident and external stallions to make the business viable.

In the HRA release of 20 April 2022, reference if made to “Like thoroughbred racing’s hugely successful The Everest, The TAB Eureka will be a slot race.” There is no reference to the fact that slot holders entirely pay for the stakes in The Everest, along with race sponsors who are attracted to the model. No breeder payments are involved. No coercion.

Also in the HRA release was the comment “Importantly for prospective slot buyers, the majority of the prize money will be funded by Harness Racing Australia.”

We seriously challenge and dispute the notion that the balance of the stakes (after slot holders have provided $1 million) is being provided by HRA. The money being provided by HRA is coming from a mix of mum and dad breeders, who just want to breed a nice horse that they can enjoy watching on the track, and commercial breeders who provide the yearling sale market with their produce. With the actions of HRA, everyone gets to pay more to play in the industry.

To start with, import fees paid for horses being imported to Australia by their owners (fundamentally introduced in 2013 to support the breeding industry in Australia, and until July 2021 distributed to states in approximate proportion to the number of horses imported into that state), are now being entirely retained by HRA. That’s approximately $800,000 that previously went to support breeding in each of the states, in the form of breeding incentives.

These are new charges to commence from September 2022, and payable by the stallion owner. Will he pass that fee on? In all likelihood – yes.

Breeders have already had to withstand the introduction of stallion book limits in Australia (not New Zealand, which retains no limit on books and no service fee levies or imposts), introduced in June 2020 after most stallions had commercial arrangements in place (in readiness for the stud season just over two months later), service fees set and mares being booked. Stallion owners were forced to compensate the following year with increased prices on breeders’ stallions of choice. Small breeders were finding it difficult to book their preferred stallion – not just because of the price increase but the choices were reduced by their first preference stallions being booked out very early.

On HRA’s own reckonings, $900,000 will be collected via the new pacing stallion registration fees, and it will affect nearly 50 per cent of pacing foals in Australia. Therefore, just by withholding import fees (that would normally go into breeding incentives) and imposing a levy, $1.7 million is being taken annually by HRA from breeders, who need all the support they can get to encourage them to continue in this discretionary industry. Breeders need to produce competitive foals to be able to compete successfully with unfettered New Zealand imports, as well as the best performed horses that Australian commercial breeders can produce. There is nowhere to hide in Australian harness racing.

How can anyone really believe that staging the ‘world’s richest harness race’ will help the local industry, and somehow grow the pie? And what happens to the “income” if those shuttle/frozen stallions cannot be viably imported, or patronage drops due to increased fees?

For many of the conglomerates or groups that will be involved, paying the full amount for their slot ($200,000 instead of $100,000) is not an impost, so why has HRA decided to contribute half when in thoroughbred racing the slot holders pay the full amount and the “rush for slots” suggests there is no shortage of money. Many of the people taking an interest are “more than ready” to part with quite significant amounts for their other racing interests.

This race concept, as exciting as it may be locally, is about waiting for a ready-made elite level horse to present itself so that you can take a chance on earning a minimum of 45 per cent of your money back in one race per year ($45,000 is the stakes for placing last). If all wagering platforms guaranteed this percentage of money back on every losing bet we would have a very attractive industry. The initial proposal also included a welfare component – a percentage was set aside to support animal welfare initiatives. That’s gone.

There can be no international flavour to the race. In the long run these are Australian based sires and dams. Adding salt to the wound, those potential slot holders involved with racing interests elsewhere can race for more than 5 times the money that harness can offer, almost every day of the week. There is no compelling reason to stay involved in racing or breeding, outside of this race. If you were from North America, you might like what you see and buy it, hence any advantage of breeding such a horse is lost to the Australian market, and that horse, just like Lazarus, becomes a shuttle stallion with an applicable additional cost of service.

Alternative funding methods were put forward, including those that would have raised $1 million without costing more than $100 per racing animal per season – spreading the money evenly across the entire industry in a painless way. All alternatives were rejected by HRA in preference to targeting stallions in particular, and by inference, breeders.

We want slot holders to be aware that Australian breeders are actually paying for your slot. If you happen to be successful, we would like you to consider paying back the people who have funded your stakes. Or talk to HRA and tell them this is not the way forward.

We all want to advance Australian harness racing. We have made generational improvements in a very short time and do have world class horses, male and female. We do not want to recede to where we have come from by reducing our access to the best available stallions at various price points – colonial, southern hemisphere or northern hemisphere. This defies the objective of continuous improvement in breeding. Breeders are held responsible for the results of their breeding decisions. They should not be taxed to the point where their choices for their mare on their budget are reduced.

We hope that the stud farms from which the stallions (hopefully continue to) journey are aware that we did not ask to be part of this race by compulsorily funding the major component. Can we restructure service fees to represent the actual component, given that there are significant maintenance, agistment and transport costs associated with stallions? Perhaps. Can we negotiate lower service fees by reviewing how the various components of the business of stallions are priced? Perhaps. Can we find a way to encourage slot holders to pay the full amount, and HRA to rescind their levy? Probably not but we should, with your assistance, try.

Please find a way to work with breeders in Australia.

Australian Standardbred Breeders Association, on behalf of the breeding organisations of each state of Australia.