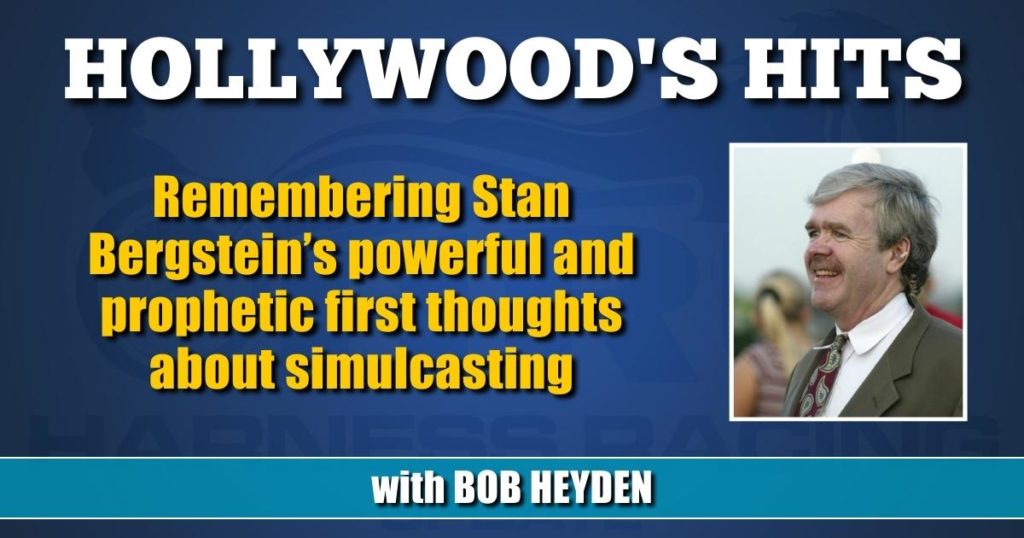 It was about 40 years ago, sometime around 1981, when multi-Hall of Famer Stan Bergstein uttered the word simulcasting for the very first time. At least through my rather informal check.

This is what he had to say then about it:

“Last Thursday hundreds of horse players converged on two locations — just as the VIPs and the media had done the night before in a dry-run, for the introduction of the betting phenomenon known as simulcasting. Grant City Mall on Hylan Boulevard and 2795 Richmond Avenue in New Springfield — both on Staten Island.”

Stan then wondered about the effect this would have on racetracks.

“If people can gather in their own neighborhoods at well-lighted, pleasant, policed surroundings with full amenities, how many of them will do so — and how many of them will go back to the track? The ones that do gather, will they be the same ones who formerly went to the track, or will they be new fans? If they are new fans, how many will be there and will that make up for those no longer going to the track? And most important of all: how much of the money that they wager will go back to the track, and thus to the horsemen who race their horses there?”

OH, WHAT COULD HAVE BEEN

What could have been if all these horses had lived longer.

All were either stars or big race winners lost way too early:

WILL THIS EVER HAPPEN AGAIN?

Three trotting females who either were or would be Horse of the Year raced in 1996. C R Kay Suzie was the defending HOY and she made it to the races twice, winning the Breeders Crown against the boys to go out in style. Continentalvictory was that year’s HOY, her dominance on display in her two-heat world record Hambletonian versus the boys and an open length Yonkers Trot win. And, Moni Maker, who was also 3-, dominating the Oaks and winning 19 in a row until bumping into Personal Banner in the Breeders Crown. She was the 1998-1999 HOY to be.

THANKS FOR THE MEMORIES SWEET KAREN

The Harness Horse Youth Foundation lost Sweet Karen this past week at age 25. She had been at Diamond Creek Farm the past few years and received great care and attention there after her HHYF touring days came to a close.

Karen was born to be the center of attention. She was, with her flowing mane and a touch of diva on display 24/7. She was also plucky. One look at her and the other “Miss Photogenic” ladies decided grazing was a better option.

Sweet Karen had her own Facebook page. It’s not easy for a Trottingbred to be both a matriarch and a den mother. She managed to pull off that daily double. Yes, the years were
adding up.

Thanks, from the kids especially, for the quarter century you gave us. You truly were born to your eventual fate.

Let’s look at some numbers of note for the two Daves — Miller and Palone. The all-time active money-leading driver and the all-time leading dash winner. Miller has earnings of $261 million and Palone has 19,924 wins.

They both got their start winning for the first time in 1981-1982. But who were the top two Daves when Miller and Palone were just getting started?

Compare Palone to jockey Russell Baze, who was the kingpin at Golden Gate

The top 10 drivers by career starts:

As of this writing, Morgan was on the doorstep, just one win away from 17,000 career victories.