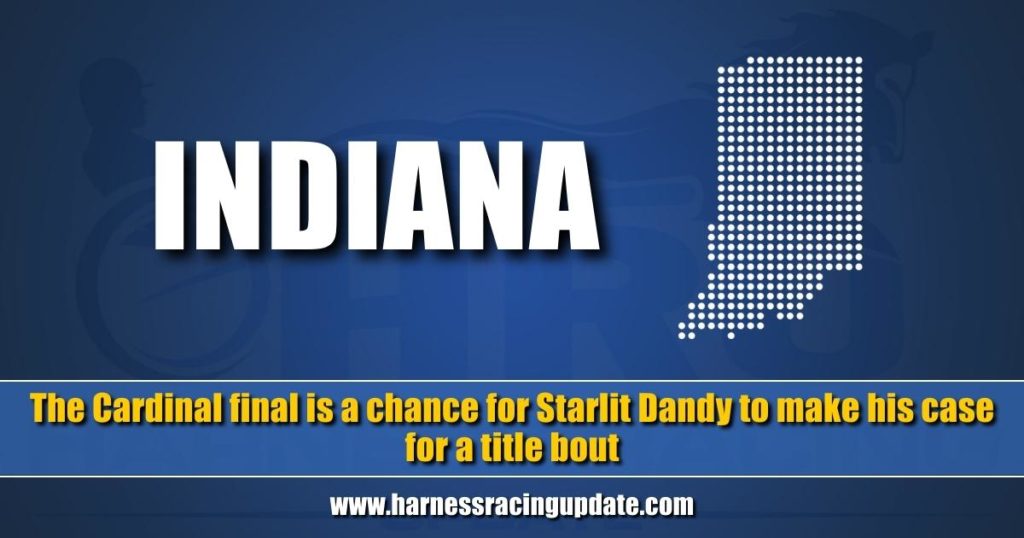 Mike Hollenback uses boxing as an analogy when discussing the challenges of getting a horse to Indiana Sires Stakes competition. If sires stakes are the headlining title bout on a card, early closing series at Harrah’s Hoosier Park Racing & Casino like The Cardinal are the vital undercard events for up-and-coming talent. Hollenback trains and co-owns Starlit Dandy, a trotter that has captured a leg of the series and recently finished second in another. The Dover Dan—Don’t Miss A Tweet gelding will get a chance to answer the bell Wednesday (April 20) in the $18,000 final in hopes of making a case for a shot at the title.

“You’re working your way up to the big fight. You’ve got to have these kinds of races, one, to figure out if you’ve got that kind of horse, and two, to let him get that confidence to be that kind of horse when you’re in against eight or nine of them that are really good ones,” Hollenback said. “That’s our big plan, just try to get in and mix it up in the sires stakes.”

Starting the season with a successful 1:59.1 qualifier on March 30, Starlit Dandy broke his maiden in his April 6 debut. Steered by Robert Taylor, the 3-year old raced near the back of the field in a $9,000 division of the opening Cardinal leg. Racing out of the final turn, Taylor could see nearly the entire field when he asked Starlit Dandy. The trotter responded with a :27.2 kick, dealing a knockout blow in the stretch to win by nearly three lengths and stopping the clock in 1:58.

“He got home in :27 with more or less a hand drive. I haven’t even taken the hood off yet. I still race him with a hood on,” said Hollenback, who has partnered with Peter Schmucker Jr. on the horse. “As I was telling Robert, we’re just trying to teach him. I think he’s a nice horse. He’s no Dover In Motion, but he’s a nice horse.”

With a win under his belt, Starlit Dandy nearly added another April 13 in the second leg of The Cardinal, a series for non-winners of a pari-mutuel race lifetime with earnings of $20,000 or less, or non-winners of $8,500 lifetime. Using similar tactics, the favorite raced next to last in the field of seven through a :56.4 opening half. Leaving the pylons and advancing first up to third in the turn, Taylor steered Starlit Dandy home quickest of all (:28.1) to finish second behind four year old Swans King, a 1:54.3 victor. The sophomore, to his credit, trotted the mile in 1:55.1 in defeat over a track rated sloppy. The other Cardinal division produced a 2:00 winner.

“Nobody expected that mile to go in :54.3. When the half popped up in :56 and change, I thought we had a shot, because I know my horse can get home,” said Hollenback. “One of them didn’t come back enough to him. I felt like he was steadily gaining. Robert wasn’t trying to drive the hair off him coming home. They had a good wind hitting them in the face again. Getting home in :28.1 the other night is :27 on a good night. We were happy.”

How does a horse with two solid sophomore starts begin the year in The Cardinal? The tale of the tape shows that Starlit Dandy has made advances after nine 2021 outings that produced two on the board finishes, no victories, and past performance lines dotted with breaks.

“When we started out he looked like a really nice colt. I trained him down at Pinehurst and he was the talk of the track down there. Everybody thought he was a real deal colt,” the conditioner said. “I drove him one night at Hoosier and he trotted in :57.2 and got home in :27 and change. After that start he got a little colt sore and he went downhill each start. He just looked worse and worse, and I couldn’t get him right.”

By late September, Hollenback and Schmucker decided to shut Starlit Dandy down. Their $13,000 Michiana Classic purchase was turned out to mature for the 2022 campaign. When he returned to the track to train down this winter, the gelding had transformed.

“His whole body matured. He was like an underdeveloped kid when he was young, but by the time he got out of high school and went to college, he looked like an athlete,” said Hollenback. “He always showed speed last year, he just couldn’t hold up to it. This year he’s been really good. He’s trained back awesome. I just cross my fingers all the time because I know the colt is talented. If you wanted to trot a 26-second quarter, he could do it. He just has a very efficient gait.”

The next test comes Wednesday in the $18,000 Cardinal final. Starlit Dandy has drawn the rail in the night’s 12th race. The trotter has proven he is no tomato can, and a victory in the series would further prove he can slug it out in Indiana Sires Stakes competition. Dover In Motion earned the title of freshman trotting champion in the Hoosier State last season after a stellar campaign. It remains to be seen whether Starlit Dandy has the mettle to beat last year’s top talent and reach the pinnacle, but Hollenback knows he has a contender.