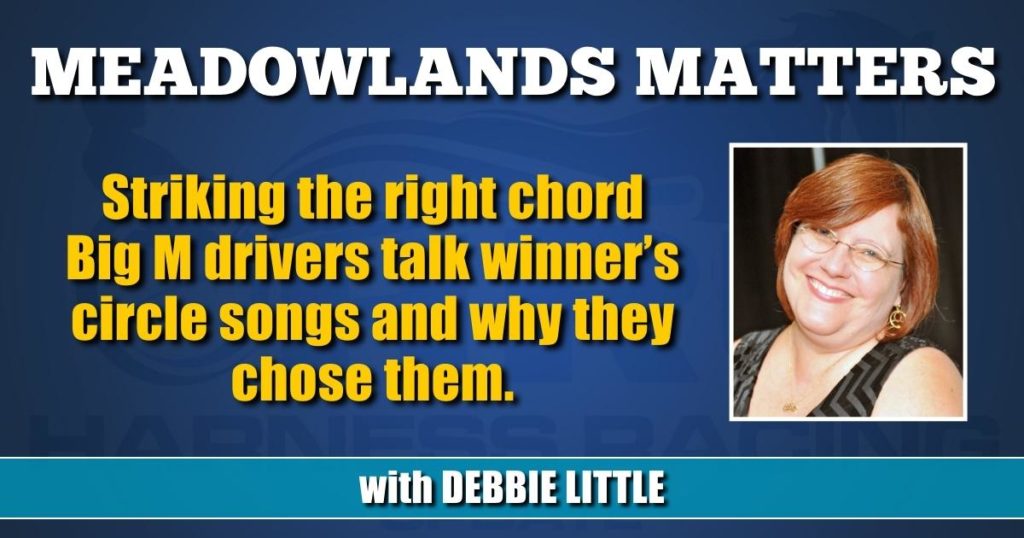 Big M drivers talk winner’s circle songs and why they chose them.

What do these songs have in common? They get played a lot at The Meadowlands.

Since the fall of 2015, drivers have returned to the Big M winner’s circle with a comeback song, and over the years, some songs have changed, but the aforementioned three have stayed the same since the day they premiered.

“Money” is a Pink Floyd classic that could be viewed as an interesting choice for Scott Zeron, especially considering old rock is not really his thing.

“When I was thinking about it, at the time when they asked everybody for a song, I thought a little bit about the [betting] demographic,” said Zeron. “I love the song and heard it in a lot of movies.

“It was synonymous with gambling, just winning and making money. You’ve won the race, you’re going to the winner’s circle, it’s all about winning and money.”

Zeron thinks one of the coolest things about his song is the unimportance of the vocals.

“It’s just money [at the start of the song],” he said. “It’s change making noise and you don’t need to have any context behind it. Everybody knows that beat with the change and that’s really the cool part, not the lyrics.”

Tim Tetrick’s song “Workin’” by Big Smo doesn’t have any sentimental value to him, but he knew after hearing it that the song fitted him.

“Whenever they called and asked me for a song, I was like man, I don’t know, and I was just happy to listen to that one because that’s what I do,” said Tetrick. “I wake up in the morning, tie my shoes, put my helmet on and go to work.”

Dexter Dunn became a fixture at The Meadowlands in the fall of 2018, as did George Ezra’s “Shotgun,” which was a chart topper in Dunn’s native New Zealand.

“I get quite a few people that come up and say I listen to “Shotgun” and love it,” said Dunn. “So, people seem to like it and I’m keeping it at the moment.”

Despite the popularity of his chosen song, there are those trying to persuade Dunn to change it.

“I have gotten a bit of pressure from the expat Kiwis that live over here to put Dave Dobbyn’s ‘Slice Of Heaven’ on because he’s a Kiwi great and it’s probably one of the best Kiwi songs ever, but I haven’t done it yet,” said Dunn.

Mark MacDonald has never wavered from the catchy “Remember The Name” by Ed Sheeran, featuring Eminem and 50 Cent. As an acoustic guitar player himself, MacDonald appreciates Sheeran’s talent for playing and song writing. In addition, he loves Eminem and thinks the cool little phrases in the song are relatable.

Even though John Denver’s “Thank God I’m A Country Boy”, was released 15 years before Doug McNair was born in 1989, he’s always liked the song. And since he grew up on a farm, he felt it suited him.

Andy McCarthy’s song choice “Thunderstruck” paid homage to his native Australia, since the band AC/DC formed there in 1973. The song may have even been responsible for McCarthy’s nickname “The Thunder From Down Under.” However, on April 23, 2021, McCarthy switched to his current song “The Business” by Tiesto.

According to Big M director of television Oz Colon, they courtesy the songs with the name of the artist and the song title, which allows the fans to know what they’re hearing. But on Hambletonian Day or Meadowlands Pace Night you probably won’t hear the songs.

“The reason we don’t play songs on those days is usually because we’re streaming live on Facebook and Facebook will take us down because they have copywrite issues,” said Colon. “If they hear a song and we don’t have ownership, they will take us off.”

The Meadowlands’ Jessica Otten is usually in the paddock on race nights, so she’s become the official song wrangler.

According to Otten, Yannick Gingras thought about changing his current song “Whatever It Takes” by Imagine Dragons, but something changed his mind.

A few months ago, when David Miller wanted to switch his song, he actually asked Otten for ideas.

“So, I was driving to work one day and “Power” by Kanye came on,” said Otten. “And if you listen to the very first part of it, I thought that fit perfectly because he had such a great year. So, we played it and then a couple of weeks later he came to me and said, ‘I’ve got to switch my song.’”

So far, Miller is still in search of that signature tune.

“I tried to find a song that kind of fits my age and is not too loud,” said Miller. “This winter, a few times I’d be driving and I’d hear a song and I’d be like, ‘That would work,’ but I could never remember the names of the songs. So, I have changed it because I haven’t had that song yet that I felt like it fit me.

“I’ve struggled with it because I’ve had a song that I think sounds good and then when I hear it going back [to the winner’s circle] I’m thinking that doesn’t sound too good.”

Miller says choosing the perfect song is not as easy as it sounds and Otten now knows that firsthand.

When Otten was honored as the 2021 Lew Barasch Breakthrough Award winner, she needed to choose her walk-up song.

Otten didn’t want a song that could possibly make her seem conceited, but no matter what she listened to, she kept coming back to “Champion” by Carrie Underwood.

“It’s such a powerful upbeat song and I love Carrie Underwood, so that’s why I went with it,” said Otten. “It did take me about 2½ weeks [to decide], I won’t lie.”

Andy Miller has had a few songs over the years, starting with Survivor’s “Eye Of The Tiger” and until recently, “Lose Yourself” by Eminem.

Miller changed off of the Eminem song because neither his wife nor his daughter were fans of it.

Rumor has it that both Andy and David Miller will debut new songs possibly as soon as this weekend.