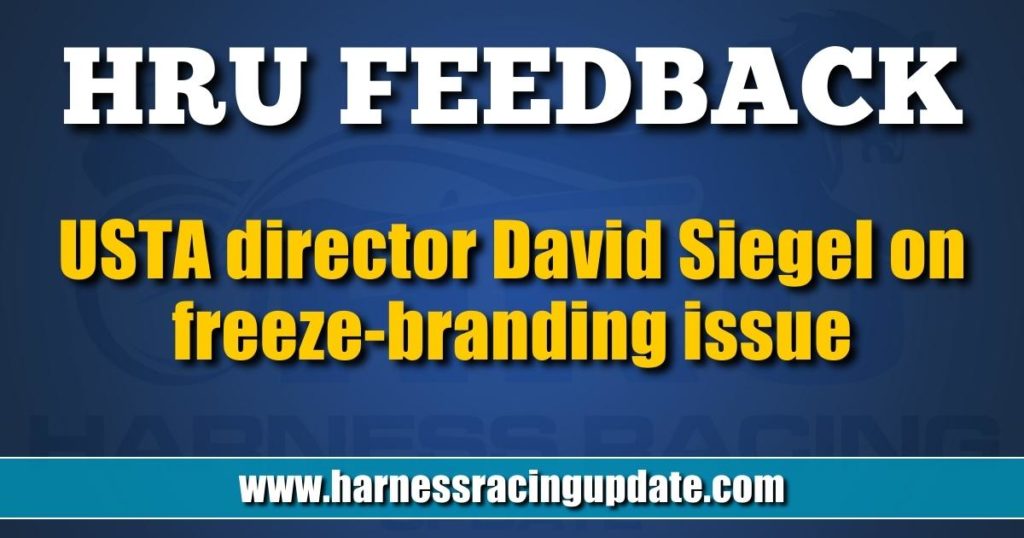 As the lead (USTA) director sponsor of the suggested rule change proposals to reinstate mandating freeze-branding (in addition to micro-chipping), I thought it would be valuable to sum up what occurred at the annual (USTA) directors meeting, and where things will likely go from here. There have been unfair accusations from both supporters and detractors of the proposed rule, and I hope those on both sides view me as someone who is quite fair and attempts to see all sides of an issue. That said, I strongly supported the mandating of freeze-brands.

The proposed rule change to mandate the brand in addition to the microchip was voted down by the board. The discussion was fair and those who wanted to voice their opinions and recommendations were heard. The points that were raised by those opposed all had merit. I don’t think they had enough merit to deny the rule change but clearly the majority did. It is a democratic board.

I think it is unfair to criticize the (entire) board for not caring about horses. Such commentary is far too general and largely not true, as the vast, vast majority of its members, do truly care — though there are some that I do think view the horses as chattel. Also, I think some of the commentary is greatly exaggerated – such as those that might say the lack of action on this rule change will kill “thousands” of horses. Such comments are made emotionally, rather than based on anything factual.

Remember, that the brand is still OPTIONAL to be used, and the folks who read this should not waste time focused on what might have been, but rather doing all they can to raise awareness of this option. I have already spoken with the USTA and it will be taking steps to improve the clarity of this option when a horse is being registered – much like a Southwest Airlines clearly markets the availability of the “early bird” upcharge. I am expecting to see this change in the very near future as it is a high priority for their development team. The current cost of $40 will also be reviewed such that the charge will be cost-neutral to the USTA so perhaps the final charge will be lower.

Furthermore, the debate already has resulted in terrific action. Several breeders, including two of the largest (Hanover Shoe Farms and Blue Chip Farms) have committed to brand all 2022 foals. The rule change included a 2023 start, so such commitments are resulting in earlier action that the proposed rule stipulated.

I expect and urge proponents to spread the word about the option. I hope they will push breeders they may know or work with to brand their horses. I would expect them, if they own a horse, to spend the $70 (higher fee when not branding while microchipping) and brand any unbranded horse they may own.

The USTA will be able to tell us after year’s end how many of the microchipped horses were also branded to see what kind of progress has been made, and perhaps, improve this number in the years going forward. While 100% of our horses won’t be freeze branded, perhaps a sizeable enough number can be reached to make a measurable impact. Also, if the issue is important enough to enough members, they have the option to vote unsupportive directors out of office or run for seats themselves.

In sum, progress for more brands has already been made. I hope that the proponents will turn their energies in a productive direction given the cards they have been dealt.

Not addressing drag is “penny wise and pound foolish”

I use a computer program I designed to pick winners at harness tracks. In the old days, I could spend the morning handicapping every track in the country and then place “If” bets online in all the races at all the tracks. I bet every race with the “If” condition that if the odds were what I considered an overlay at one minute to post, the bet would be automatically entered. If the odds were not to my liking, then no bet was made. I pushed hundreds of dollars every day into the game. To tell the truth, I barely broke even, but the small bonus I got from the online betting services put me ahead.

Then drag hit. One minute to post was now eight minutes from the start of the race and the odds at “one minute to post” are not even close to what they go off at. I found the computer “IF” bets were being made on horses that finally went off at prohibitive odds, and I was losing money. So, I stopped pushing hundreds of dollars every day into a game I was losing. Now, I’ll just make an occasional bet on races that I’m watching live. Instead of pushing hundreds a day into the game, I might bet about $100 a month now. Drag is a drag. Delaying the post time might squeeze a few extra dollars from the pockets of race fans at the track, but it turns off online bettors like me who used to bet thousands of dollars a month. It’s penny wise and pound foolish.

Long list of reasons post-time drag has to go

I’d like to reply to Richard Young’s “Feedback” letter from March 13 (read more here). In it he suggests that there really isn’t a post drag and I disagree but not so much as if there’s a drag, but does it help or hurt the sport.

What I am hearing is that by creating this drag it increases handle. And one should get used to it as Mr. Young suggests. He said it’s like a clock that is set ahead 5 minutes so you’re not late. You eventually get used to it, but what about those that visit? They have no idea of the real time or what your “fantasy” time is. It’s confusing and frustrating.

I think decisions made should be based on the pros and cons.

And in my opinion the pos can be fixed. I know the Meadowlands did a test of starting on time and said it decreased handle, but the sample size was too small. I believe the test was only seven or eight racing nights. One, that’s not enough time to condition bettors to start getting bets in at 2 minutes instead of 0. And second I believe there were some bad weather nights and that usually decreases handle. Let’s try it for three months in the summer.

And for not butting heads with other tracks, when you’re going to set the next race’s time, look at Mohawk, Yonkers, Hawthorne, whatever tracks give you the most handle competition and set around it. It doesn’t have to be perfect. I know for myself I never bet more than two tracks anyway. So, if one time you run up against another, so be it. It’s more important that you can start your race when the clock strikes 0.

Please reread the important two points above. If we want NEW bettors then it’s far more important in the long run to maintain integrity and keep bettor’s interest than playing the “better hurry up there’s 0 minutes to post” game.

The fat lady is singing

It appears that the harness racing high muckity-mucks don’t much care about our complaints that there is a “Fire-in-the Attic,” it’s business as usual until it isn’t. Well, I for one have moved on to other sports where rules are followed, oversite is applied as mandatory and those that are appointed to administer oversite do their D-M Job Why in the world would we not apply a “Once and Done” rule to bad people who don’t follow the rules? Why would I want to give multiple chances to trainers that drug horses or have proven involvement in FIXED races? Anything short of harsh rule application exacerbates the problem and rottens the whole barrel.

These are just a few of my complaints and with the USTA’s Russell Williams comments from a couple of weeks ago you can see just how far out of touch oversite is with the officials charged with their administration.