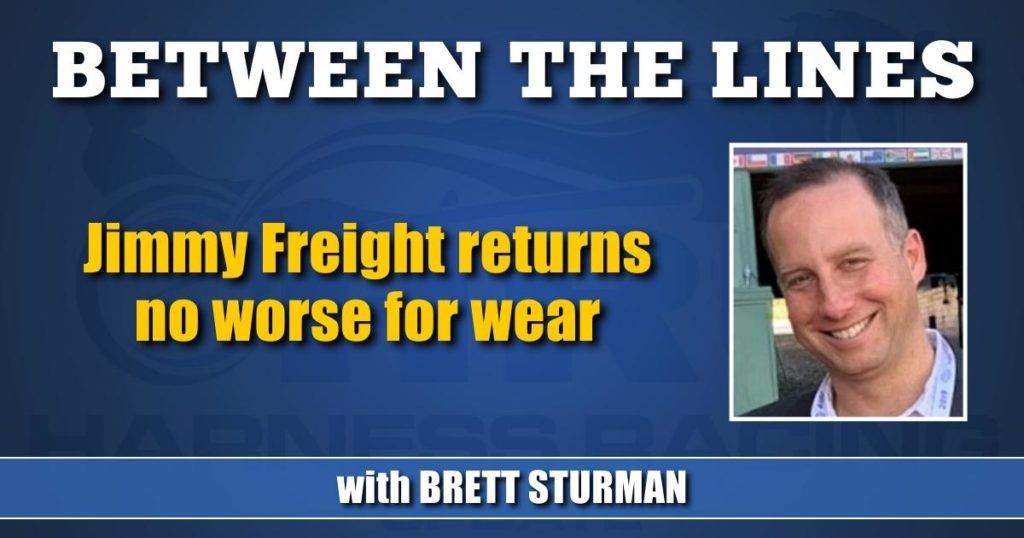 In winning back-to-back Woodbine Mohawk Preferreds, the 2018 O’Brien Award winner and Winbak stallion is making good on his return to the races.

This past December marked the first time since the 2019 Breeders Crown that former Ontario Sires Stakes star Jimmy Freight set foot in a pari-mutuel race. Initially retired to stand stud in Ontario at Winbak Farm for the 2020 breeding season, the decision was made by Jimmy Freight’s owner Adriano Sorella to bring the $1.4 million career earner (with a mark of 1:48.1 taken from the 2019 Mohawk Gold Cup Invitational) back into racing, in addition to continuing at stud.

After a few races to get his feet back under him, including his first two races back where he was placed directly into the Woodbine Mohawk Preferred, Jimmy Freight won his fourth time out, a 1:53.4 measured win off cover in a conditioned race. From there, he worked his way back up the ladder, winning a Preferred on Feb. 12 and then did so again on March 5 and most recently this past Saturday (March 12).

For Sorella, he likes what he sees thus far in Jimmy Freight, but it’s been an ongoing journey.

“It’s probably been a little bit up and down for me because when we brought him back there was the question mark of being off for over two years,” Sorella said. “At Winbak it’s totally different obviously than being out there every day jogging and staying loose. There, they go from being in a stall, pulling semen, back into a stall, and so forth. There’s no knock on the process, but it’s very different from racing. You don’t get the same vet work, same treatments, so you question how he’s going to come back after being out of it for two years.

“The one thing I said to (trainer) Richard (Moreau) is to take as much time as you want. When he started racing, those first two starts were really to see what he’s capable of and to get his lungs going. And trust me, I wasn’t too happy with those first two starts and was thinking, ‘Was this a mistake in bringing him back?’ You wonder about it. But then in his next start I thought, ‘Okay, we’re on the right path here.’ He looked pretty good and strong when he won that Preferred last week, but it was the race before that really impressed me when he was seventh halfway through the lane and I was thinking once he got out that maybe we can get here for third, and then he kind of just closed like a freight train. I found out that night afterwards that he got shipped to Winbak on Friday to service mares, got back on the trailer to Richard’s and then raced on Saturday. So, he was full of himself and that’s where it looked like it came from; he was ready to go.”

In addition to questions about how Jimmy Freight would respond physically after being away, there was also a question of the horse’s mentality as well.

“You’d think he’d be excited when he gets to service the mares, but the one thing I noticed when I was going to Winbak was how he seemed uncomfortable and just not himself. He’s nervous, and you can see it,” Sorella said.

The owner said it’s possible that the unease of the horse may be a contributing factor to the stallion’s publicly documented fertility challenges.

With those factors contributing to Jimmy Freight being able to service only about half the mares he would have intended to otherwise, as well as restricting options that other types of shuttle stallions may have, those were factors in Sorella’s decision to bring Jimmy Freight back.

“First, he doesn’t seem like he’s happy, and why are we going to do this to him all year-round if he’s not happy? Let’s bring him back into racing. And I started looking at all the other stallions that recently retired, we don’t have the mares in Ontario for all these stallions. The year he retired, you had Courtly Choice retire, McWicked retire and the following year here they all come again. Tall Dark Stranger, Papi Rob Hanover, Cattlewash. And you look around and you think, ‘Where are all these mares going to come from?’ You’re already seeing a slip in the case of Sportswriter for example who for three years was breeding 250 mares. He’s always had a big book, and then you can see the decline and all the sudden his number is down to double digits. You have to look at all these stallions. Betting Line is here, you have Stag Party, Betterthancheddar, and you still have Bettor’s Delight. There are all these stallions. So, if you’re not going to breed a book of at least 100 mares — and he’s already had some fertility issues — why not just race him, and see what happens? The breeding season is only three to four months, tops.”

Jimmy Freight has been made eligible this year to the Canadian Pacing Derby and the Breeders Crown, both of which are at Woodbine Mohawk.

“When it comes down to breeding and racing, if he’s racing well, he’s going to continue to race,” said Sorella. “Richard doesn’t race in the States at all and I was very cautious with what I did with staking this year. Number one, I wanted to see how he came back. The reality is that this is still the Preferred in the wintertime, we have to call a spade a spade. There are some nice horses there, but you know they’re going to go speed once the others start showing up for the big dances. It’s more of taking our time to get where we need to be, and I still think he’s got some rust to shake off. There’s some kinks he’s still working out, and hopefully by the time summer rolls around all the rust is off and we can have a good season.

“As long as he’s happy doing what he’s doing he’ll continue to race and once the season starts for breeding, he’ll go back to breeding. That’s giving him a fair shot for him to do what he wants. I feel like we took him out of a situation where he wasn’t happy staying there year-round, so we put him back into racing which he seems to enjoy. He’s a different horse in the barn than he is in the breeding barn. His attitude is totally different. The plan is to keep him going based on that and we’ll see what he can do where he’s happiest.”