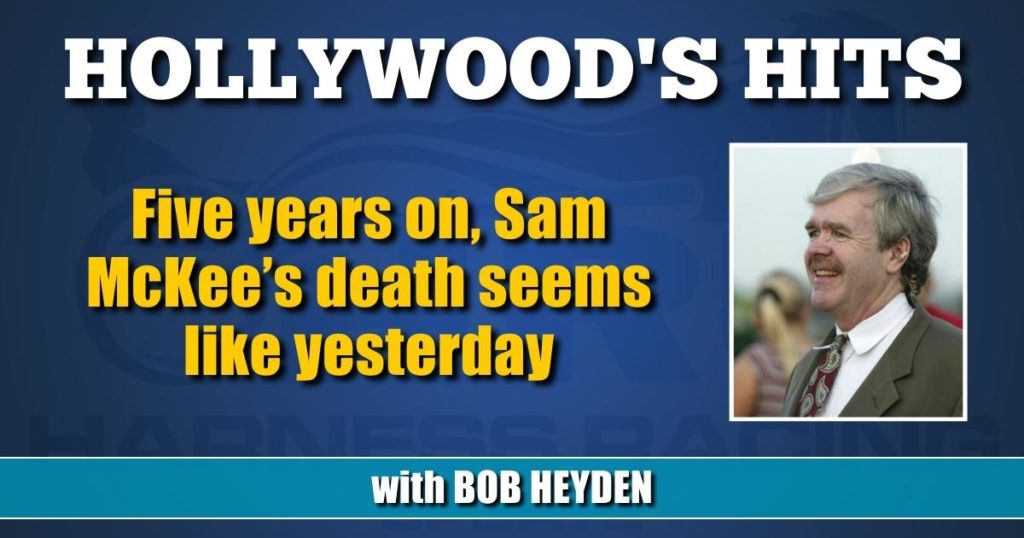 The legendary race caller — and so much more — would have turned 60 this month.

Sam McKee passed away five years ago this month. He was born on March 24, 1962 meaning he would have been 60 shortly.

What a year 1962 was. Many celebrities turn 60 this year, such as Bo Jackson, Tom Cruise, Jon Bon Jovi, Jim Carrey, Jodie Foster, Jerry Rice, Evander Holyfield and Patrick Ewing. It was the year that Johnny Carson debuted, as did Walter Cronkite’s nightly news. The Navy Seals were formed, K-Mart opened its first store and Taco Bell debuted.

In harness racing, Bret Hanover was born on May 19, 56 days after Sam McKee. Dave Palone was born 39 days before McKee and he’s currently on the doorstep of 20,000 career wins.

But this is about Sam McKee.

For those who didn’t have the honor and pleasure of knowing him, he was a harness racing lifer from Michigan who made the move from the locals to the Meadowlands at the end of the 1990s. He had the ability to speak to a national audience at the same time never forgetting his roots. You name it in the business, he did it.

McKee was a problem solver, a coordinator, a trouble-shooter, a pacifier. He showed up, he cared, he fought for you and he despised any kind of self-promotion. He was born with his sleeves already rolled up. He was a listener. He kept moving forward. More than anything, he loved his family.

If there was an MVP award given for the ‘Best Behind The Scenes Worker’ McKee would have 10 or more of those trophies. He redefined quiet efficiency.

I took the opportunity to talk with a cross section of people associated with the sport to ask them what they thought today, five years later, as we collectively remember Sam McKee.

Dave Palone: “Sam and I were the same age and had a lot of things in common, including our girls’ love of barrel racing and spending money on riding horses. That was always the first thing that came up in conversation. Sam was an incredible talent and tribute to the sport. I’m not sure anybody’s fully recovered from losing him. One of the nicest human beings I ever met in my life.”

Megan Rider (Hoof Beats): “Sam had an innate ability to light up a room. He was affable and had a personality like no other. His voice, persona, and love he had for the sport of harness racing was inimitable. He is so very missed.”

Stacy Chiodo: “I can’t believe it has been five years already. March 11 was 22 years since my own stroke. The last text I got from Sam came after Mighty Joe Young had his final race November 11, 2015. ‘Tell me it isn’t true,’ he said. He always said ’Joey’ was one of his favorites. Sam is truly missed but never forgotten. By not growing up in the industry I was always intimidated by people like Sam and the announcers. Then when he asked me to do “In The Sulky,” I was so nervous but Sam made me feel like I belonged.”

Bill O’Donnell: “Sam used to come to Maarveland Farm when I was still training a few. A student of the game.”

Irv Atherton: “He was a great salesman too. When they held the Hambletonian Charity Golf Tournament Auction, he got you to bid on everything. And a good friend.”

Sherif and Dawn Cunmulaj, they knew McKee from Michigan roots: “Sam was hands down the most well-liked most popular person in all of harness racing. That is a true testament to the kind of person he was. Fellow Michigander, you were a gift to us all.”

Mike Keeling and Paula Wellwood (Marion Marauder was the sport’s last Triple Crown winner and Sam called the race, the 2016 Kentucky Futurity): “Sam was a friend over the years and we have particularly great memories. In 2016, when Marion Marauder won the Futurity, he made not only one of the great close calls ever, but he took the time to come see us shortly after the race. He did that often. He passed away not too much longer after that and we feel so lucky to have had him in our lives. It’s so nice to be able to reflect on such a wonderful time in our lives with such a wonderful man.”

Billy Haughton, Jr.: “Sam McKee was all about kindness and respect. A great family man and a man that loved to ride his horse, to be around horses, to talk horses. And be kind to people. It seems like yesterday. I miss him so much, such a good man.”

Patrick Lachance: “I remember years ago going through a hard time with my barn, so I slowed down driving at Lexington. I saw Sam around that time. He pulled me to the side, ‘Listen, I watch a lot of races. This is what I do for a living. You’re a good driver. Trust me. I know.’ So, I didn’t give up and then a few years later I won the Bluegrass. Ironically, his daughters presented the trophy in the winner’s circle. I felt like Sam was there too. I could picture him telling me ‘I TOLD you so!’ So, besides being the best at what he did for a living, he was truly a great person. He will never be forgotten.”

Dawn/Rod Allen: “His voice is immortal on so many races I’ve been in and he was especially excited when we won, talking about our family and the horses. He was so full of knowledge and love for harness racing. His enthusiasm is sorely missed.”

Bill Augustine: “I remember about 8-9 years ago racing a young colt at the Meadowlands who got pushed around in a race that Sam was calling and was second or third. A couple months later he was in at the Red Mile and Sam mentioned on the in-house show that my colt was ‘body slammed’ at the Meadowlands a while back. I couldn’t believe he remembered that. I told him so later. That’s the way he was.”

Trond Smedshammer: “My all-time favorite race caller. He loved the sport as much as anybody. Just the greatest in all aspects. Just another testament to the saying The Good Die Young.”

Bruce Riegle: “A great man in the horse industry. Loved horses and his family. Never met a person he didn’t know — and if he did-, he quickly introduced himself. He was a great friend and I think the best announcer I heard in a long time.”

Sheri/Kevin McDermott: “Sam was one of the good guys. We understood each other. Respected each other. Our “In The Sulky” segments were priceless. A friend that can never be replaced.”

JoAnn Looney: “I only admired Sam from afar. I met him briefly. He was the guy who had what they call the ‘It’ factor. It didn’t matter if he was a close friend or it was just a brief encounter, you never forgot him.”

Scott DiDomenico: “‘Charging hard!’ The best of all time and the man who gave everyone chills with his race calls night in and night out.”

Mark Weaver: “Harness racing, our country and the world miss people like Sam McKee. More than ever. He was so kind, caring and committed. Simply the best.”

The last decade or so of McKee’s life provided many highlight moments for myself, the fans and even McKee himself.

His call of Always B Miki’s 1:46 world record in 2016 was a proud moment for him. The 2009 Muscle Hill Hambletonian makes anyone’s ‘Best of’ list. The first trotter ever to best 1:50 at the Meadowlands — J L Cruze (1:49.4 in 2015). Personally, I never would have had the opportunity to chat with both Nick Jonas and race car driver Martin Truex at the 2016 Hambletonian had it not been McKee’s diligent work that got them there.

Five years. It seems like five minutes at times. Who among us would be shocked to see McKee showing up at a meeting, Starbucks in hand, grabbing a format and saying, ‘Sorry for the delay. What are we up to?’ The first half a year or so after his passing almost seemed like some kind of suspended animation.

Even though we know — absolutely know — that there is no Curtain #4, it doesn’t stop us from taking the occasional glance over in that direction.

Five years has shown us that we never were or never will be able to replace him.

Five years later, many still think, ‘Where’s Sam McKee?’ when a problem pops up. I know I have.

Let’s hope that we can all continue to realize the immense comfort we get in the eternal memory of Sam McKee.

Our collective ship came in on March 24, 1962. And we are all on board in our admiration and reverence for a man who bettered each and every one of us.