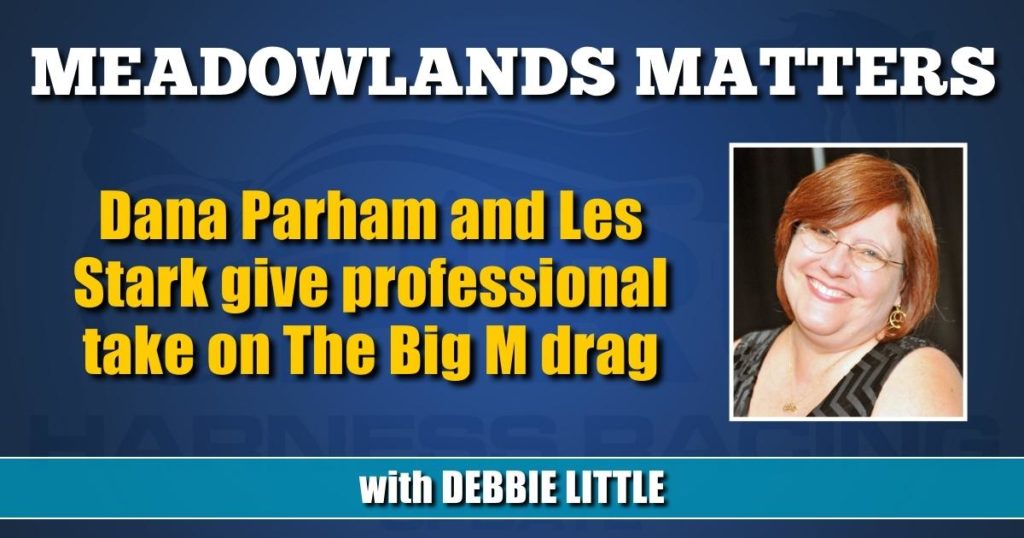 Apparently, the number zero is a drag for some people. Get over it. The drag is merely an illusion.

The main complaint sited by anti-draggers is that post time should be post time when the tote board reads “0” minutes to post, and that a seven- or eight-minute drag is unnecessary.

The Meadowlands conducted a six-week experiment at the beginning of the year by lessening what they referred to as the “drag”. Since their handle numbers declined over that timeframe, the so-called drag returned in mid-February and the handle immediately increased.

Former high roller and current owner Dana Parham is certainly more than qualified to speak on gambling at the Big M, and can see both sides of the drag debate.

“In the purest sense, I wish we didn’t have such a thing,” said Parham. “On the other side, you’re running a business, and for whatever reason your post time now conflicts with Woodbine. Maybe they had an inquiry, maybe you did. So now your post times are on top of each other. Now you’re not going to get the same handle. People are going to miss your race betting Woodbine or they’re going to miss Woodbine betting your race. So, are you just supposed to take this loss in betting handle because we said we were going to race the race at 9 [o’clock]?”

According to Parham, he and his ex-partner ran a highly successful gambling company that wagered at least $350 million on horse racing for 20 years from 1995-2015. Parham left the company in 2016 and can currently only make an occasional bet via the terms of his sale agreement.

Les Stark is currently a major player at The Meadowlands, and like Parham, understands the importance of handle.

“What I do care about is that they get the maximum amount of money into the pools,” said Stark. “So, if that requires them to delay so they lay off of another signal that may be getting attention at that moment and that that’s what they think they need to do to gain more handle, then that’s what I would be in favor of. You want a little time all to yourself so a person has a second to see, oh, The Meadowlands is on. I want to bet that race.”

Parham said harness racing needs its own version of an air traffic controller to tell people when they can land their races, so to speak.

The Meadowlands actually has someone to do that job, post-time coordinator Michael Antoniades.

Even though he cannot officially tell other tracks what to do, he can ask nicely and do everything possible to coordinate with them so everyone gets a positive outcome.

“At night you have Turfway every 30 minutes, Charlestown every 32 minutes, Penn National every 28 minutes and then the harness tracks that go about every 24 minutes,” said Antoniades.

Antoniades works with Bill McLinchey, director of standardbred racing at Woodbine Entertainment, Megan Walker, senior manager, racing operations at Woodbine Mohawk Park, Dave Bianconi, director of racing operations at MGM Northfield Park and Chris Schick, general manager at Cal Expo, to make sure – whenever possible – that there are no mid-air collisions with their race signals.

“Ideally, we try to set it up for the harness bettors of the world, because [The Meadowlands and Mohawk] are the top two products, so we have a race going off every 12 minutes,” said Antoniades. “The larger that space is, the better the results are going to be for everyone.

“You’re making it possible for people to watch both tracks. If two tracks run at the same time, you’re not going to get anywhere near the maximum revenue because you’re making people choose. We try and do what’s best for ourselves and harness racing.”

As a result of their coordinated effort, according to Antoniades, all four of the aforementioned track handles were up
last Saturday.

It is currently the intention of The Meadowlands to run their races roughly 24 minutes apart. So, what is perceived to be a drag is actually a highly thought out and tested part of their plan.

Forty years ago, when everyone wagering on harness racing was at the track, post parades started at 10 minutes to post and when the clock hit zero, it was go time.

Now, on a typical night when the Big M post time clock clicks to zero, the horses are just stepping onto the track.

Why the big change? Because the majority of wagers are placed off track, the time had to change with the times, so to speak.

But why not just send the horses out with seven minutes to post and let zero signify the start time?

Because FOMO (Fear Of Missing Out) drives handle. When bettors see The Meadowlands at zero, they start paying attention. They know it’s not post time because the horses just came out onto the track, but they also know, just as if they were standing on that long line in the grandstand, that post is imminent.

In actuality, the difference in the average time between races now and the ones during the aforementioned short-lived experiment is only about two-to-three minutes. Also, if you leave out 2021’s exaggerated figures since Mohawk was closed, the experiment numbers weren’t far below previous years.

“Whenever we compare stats, we kind of put them in a vacuum,” said Parham. “That’s kind of human nature. Two times I took the shorter route and it took me longer, therefore the shorter route always takes longer. You had a small sample size.

“Well, I’ve got this coin and it always comes up heads. I flipped it once and it came up heads, so it’s 100 per cent. Maybe you have to flip it a thousand times or 10,000 times to really see if it is biased to heads or not.”