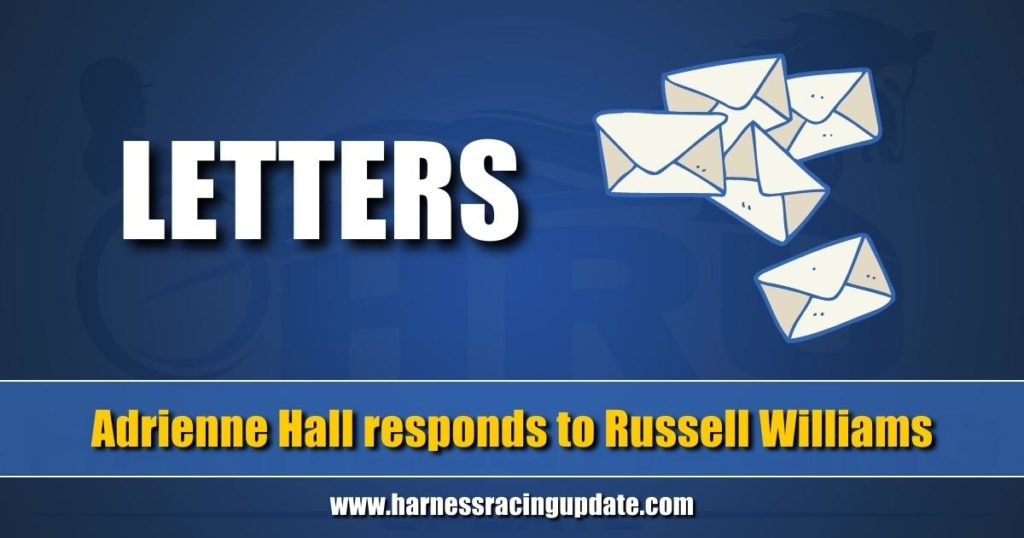 In response to (USTA president Russell Williams’) comments about me in the HRU (full story here), I have the following to say:

Russell Williams is veering from the facts and being disingenuous regarding the USTA’s true motives. The USTA did not make the decision to take my membership based on my testimony. T.C. Lane, CEO of the USTA, acknowledged to my attorney that it was done prior to my transcript being available and occurred after reading the one initial media report. Unlike the NJRC who waited to receive context from myself and discuss the matter, the USTA was looking for a quick press release and nothing more when they revoked my membership. I’ve not held back once from speaking with any organization looking to learn more of the facts. The USTA’s action and silence towards me feels as if it is a “Punish the source” mentality instead of about cleaning up the game.

I did not have a “history” of using Performance Enhancing Drugs. In fact, this was my very first year in the harness business. If he thinks I walked into the barn knowing anything about drugs or pre-racing, guess again. He should be more concerned and utterly embarrassed that in the backyard of the USTA headquarters, one of the biggest dealers of illegal drugs was allowed free rein of the Ohio horses and trainers for years before the Feds stepped in to stop him. If anyone at his organization were doing their job, the Government, 5 Stones, Jockey Club, and Jeff Gural would not have had to do it for them. No matter how many times he wants to state as fact that I reached out to Fishman solely to acquire PEDS, it doesn’t mean it is true. Testimony and text messages put into evidence clearly show that I innocently reached out to Fishman to perform a lameness exam and to be my horses’ primary vet in FL. Other text messages brought in as evidence between Fishman and Gianelli show them discussing me as being “Not very knowledgeable”. I was naïve.

In my testimony I did say that it was my understanding that had I been caught administering anything to my horses, I could potentially be in big trouble. What Russell was not privy to were the conversations that I had with the Federal Prosecutors and the FBI about this and they were hopeful that any Governing body of a sport would be inclined to look more at the positives from my cooperation as opposed to focusing solely on the admissions I made.

Russell mentions BB3, TB7, etc..as some form of “Gotcha” but can he tell me what they are? Has anyone had a positive test for these things? I did not want Epogen or to hurt my horses and I made that abundantly clear. What may be the biggest irony here is that while these drugs are untestable on race day and he uses them as examples of my cheating, he and the USTA have fought HISA and its desire to implement comprehensive Out-of Competition Testing that might very well have an impact on these substances ability to be used; all while simultaneously touting how clean the industry’s race day testing results are as a way to laughably argue against the need for HISA.

While what I did was wrong and I owned up to it despite never being indicted and working for two years with the Feds with no guarantees of the outcome, the USTA and Russell Williams’ response to the criminal cases and my situation only goes to show where the real problem in harness racing lay.

Whether it be the USTA turning a blind eye to the thousands of horses who are ending up in kill pens, moving to eliminate Freezebrands to make the horses unidentifiable, or fighting Congress, WHOA, HISA, The Jockey Club, Breeders’ Cup, Jeff Gural, and USADA’s efforts to clean up the sport, their arrogance and disregard for the issues in racing is telling. An organization that ignores their own Board Member, Joe Faraldo’s, ties to indicted trainers, ignores the Fishman client list that became public recently, pushes back on everyone from Congress to Aftercare entities, while attacking a trainer with two horses in her care as the problem, is either arrogant, clueless, crooked, a part of the bigger problem, or probably all of the above.

The truth is, my situation is meaningless in the scope of the problems in racing, but they are using it to take the heat off of themselves and to appease the mob on social media (who before my testimony had them in their crosshairs). For the president of any organization seeking credibility to deem my admitted mental health struggles during this situation as “entertaining” pretty much says it all. It’s at best a diversion, a redirect, and childish while at the same time making clear he does not have the horses, industry, or industry participants best interests at heart.

I made a mistake. I owned up to that mistake. I did so willingly and would do it again even now knowing that it has resulted in what is probably my last race in the Standardbred Industry. What I won’t own or accept is the fact that a monopolistic entity and its leadership that is solely interested in protecting their own personal interests is going to set the narrative and lie their way towards making the public believe they give a damn.