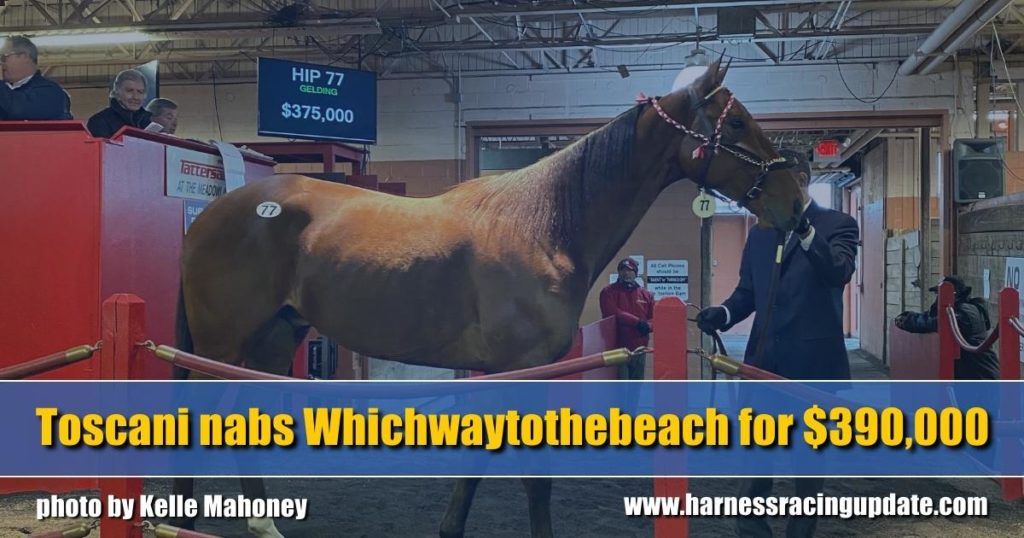 It was the second highest-priced horse sold in sale history and it came during an auction that set new records for average ($47,259) and median ($29,500).

With one significant purchase, Gino Toscani of Mount Hope, ON led the buyers at the Tattersalls Winter Mixed Sale held Monday (Jan. 17) in the paddock at the Meadowlands Racetrack in New Jersey.

“He seems like a nice horse,” Toscani told the USTA’s Ken Weingartner. “I hope he can come through. He’s just going to be 4. His brother, Captain Barbossa, was good as a 4-year-old and hopefully he’s going to be the same for us and we can get our money back.”

Kelle Mahoney Whichwaytothebeach topped the sale with a bid of $390,000 from Ontario’s Gino Toscani. The 4-year-old gelded pacer was consigned by Northwood Bloodstock.

Whichwaytothebeach will be trained by Desiree Jones. It was the second-highest sale-topper since at least 2014. The record was set in 2020 when Lindy The Great sold for $450,000.

“He’s a legit horse and he was younger than the others. I think that was a big edge,” Boni said.

In all, 90 racehorses, stallion shares and breedings collectively sold for $4,253,300 to produce an average of $47,259 and a median of $29,500. The sale set new records for average and median. This year’s auction also set a record for the fewest offerings sold.

“(The record average is) partly a reflection of the number of horses sold, but, on the other hand, it is a fair representation of what we did offer. I was very happy with that,” said sale manager David Reid. “It’s always exciting to have a live sale, for sure.”

“If he’s anything like he’s been all his career, he’ll make money,” DiNozzi told Weingartner. “We’ll race him at Yonkers a little bit, put him in the Borgata Series, but he’s also good on a mile (track) so if he’s racing well, we will put him in everything. He’s raced with the best and either been competitive or beaten them. There is nothing not to like about the horse.”

Reid said he was “very happy with the pre-sale traffic and the at-sale traffic. I was very happy with the attendance. I thought the auctioneers, once again, they are a very talented crew that kept a very good pace to the sale and we continued to offer the online bidding as a convenience to owners that can’t make it and it’s working out very well.

“I think there were 10 horses sold online today with another 14 (online bidders) ending up the underbidder. Obviously, as a result of the pandemic, we’ve offered other services and tools. I think the results played in today.

“The other thing I thought was interesting is that on the streaming through www.tattersallsredmile.com there was a point in time today where we had more than 1,000 viewers watching the live stream. For the industry, I think it’s great to see the energy and the participation level and it kind of goes off 2021’s sale season, which was favorable.”