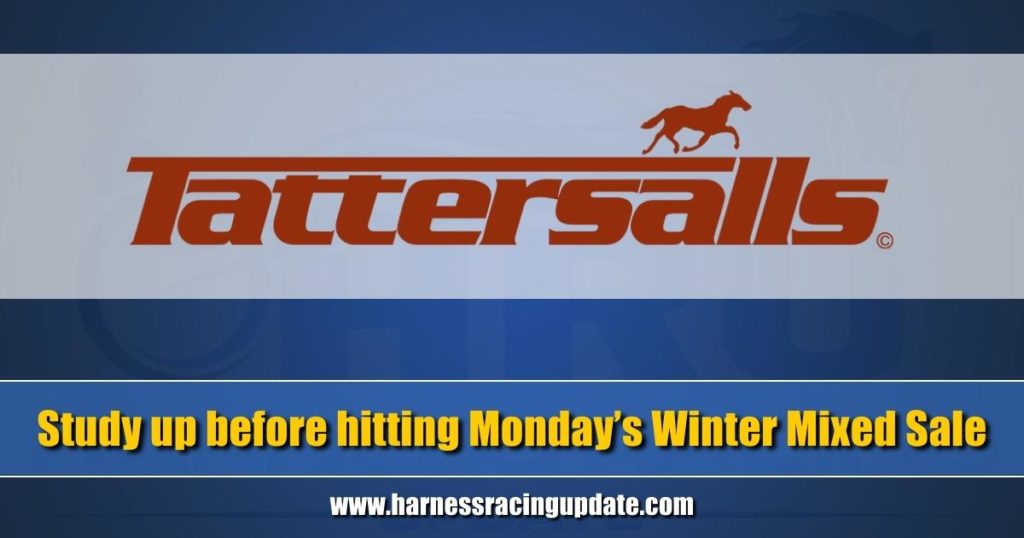 Northwood’s Bob Boni, Preferred’s David Reid and Diamond Creek’s Shaun Laungani talk about some of the notable horses they are selling at The Meadowlands.

Before hitting the Tattersalls Winter Mixed Sale on Monday afternoon (Jan. 17) at The Meadowlands sale manager David Reid said it would behoove buyers to check out the results of horses that raced Friday and Saturday nights.

“There’s a shortage of horses in a lot of jurisdictions and we’ve got a lot here that are obviously proven performers and they are racing… If you want a horse that’s ready to race, they are here,” said Reid, who added that his Preferred Equine Marketing is selling 16 horses that were scheduled to race Saturday, after this article was completed. “It’s a proven marketplace, proven time and time again, and it will continue to do that. It’s a good venue and it’s a good opportunity and I’m looking forward to conducting the sale.”

The auction, which starts at 1 p.m. on the Martin Luther King, Jr. holiday in the Big M paddock, will see some 82 head, as well as some 11 stallion shares or breedings, being offered.

Those unable to attend the sale in person can still bid remotely via ProxiBid, but must register before the sale starts.

A live stream of the sale can be viewed here.

Representatives of the sale’s three main consignors — Preferred Equine, Northwood Bloodstock and Diamond Creek— took some time to tout a few of their offerings to HRU.

Bob Boni said he believes his Northwood Bloodstock will sell the sale topper.

“For me, Whichwaytothebeach (Hip 77) is pretty much far-and-away the best horse in the sale. He would’ve been the best racehorse in any sale we’ve had this year. For what’s been available this year, he wins races when he’s supposed to win, which I think is very important. He made $450,000-plus racing against the best colts and beat most everybody last year, except a handful. He was competitive with the very best in his generation. He’s a versatile horse. He can go a half. Obviously, he can win on a mile. He had a tremendously good qualifier last Saturday in :51-and-a-piece. He’s fit, he’s sharp, he’s by a horse (Somebeachsomewhere) that you don’t have to worry about him going on because they all do,” Boni said. “He’s fresh and he qualified great. He’s a tremendous candidate for the Borgota.”

“He’s a multiple half-mile track winner in :52. He’s racing (Saturday), as a matter of fact. He’s a proven horse. He really hasn’t had that many starts and he made $100,000 last year and he’s really just figuring out racing here – this will be his second start on a big track, off of a very good qualifier that he won. He won in :52 at Yonkers a couple of times and beat good horses doing it. I make him a pretty high-level horse.”

On Hip 67, Ethan T Hanover, Boni said, the unaltered son of Bar Hopping out of Emmylou Who has, “a big pedigree and is a competitive stakes horse. Again, when you look at the purse structure here, the fact that he’s a multiple half-mile track winner, I think it bodes extremely well for him going forward. Great looking horse on the racetrack – good-gaited horse. On his pedigree, everything points to him going on and continuing. He’d be one, if you looked at him as an open trotter next year and for many years after that, why not? I would be very optimistic about his opportunities.”

Boni owns a piece of Hip 64 As Always and said the gelded son of Always B Miki out of A List Hanover, “Always looked like a horse with a lot of talent and had some trouble putting it together. He’s a big growthy horse. In his last six or seven starts, it looks like he’s kind of figuring things out. He’s been very good. A couple of races he lost in the middle there, I think you could come up with some pretty good excuses. Last week, he won wrapped up. It was really an impressive mile and he’s in-to-go (Saturday).”

Hip 38 Alwaysthebstplace — “She made $80,000 last year and could race anywhere. She’s got a pedigree, being a sister to a pretty good horse, Always My Place. She’s going to have value beyond the racetrack.”

Hip 39 Boujee Girl — “She’s got a good, solid pedigree. Out of a world champion. She’s a sister to a top horse. She’s had two starts here and she’s finished good in both of them. She’s had two good closing starts and she’s a mare that can do somebody some good.”

Hip 55 Stowaway Hanover — “She’s a Western Ideal mare. She made $100,000 last year and she’s right on the page – she’s the immediate family of Downbytheseaside. That’s pretty hot right now. She’s got a fast record and she’s just five. She won in :53 on a half last year and just got beat in :51, so she’s obviously a legit mare anyway you race her, but she’s also got pedigree.

Finally, Boni mentioned a horse selling in the supplement — Hip 208, Blue Devi — “He wins. He made $100,000 last year and he wins races. I’m a big believer that no matter where you race… one of the fallacies in this business has always been to take the horse that’s been getting beat up at the Meadowlands or wherever and lets go take him to a slower racetrack. Well, guess what happens to the horse that’s finishing third, fourth, fifth at the Meadowlands when you take him to Buffalo? He finishes third, fourth or fifth there, too. For me, it’s when they fall into the right spot, do they win?”

Reid said he is happy with the quality Preferred has to offer.

“It is a slightly compact sale with plenty of talent and proven performers.”

Apart from offering a pair of mares in foal to Sweet Lou (Hip 1 Firefly and Hip 3 Mimi’s Lily) and shares of leading sires, including Muscle Hill and Sweet Lou, Preferred is selling a range of leading racehorses. Reid highlighted:

Hip 87 De Los Cielos Deo — “A winner of over $500,000 lifetime and a blowout winner in his last start here at The Meadowlands on January 8th.”

Hip 91 Kings County — “A well-bred son of Muscle Hill that has serious ability.”

Hip 92 Patriarch Hanover — “A winner of nearly $400,000 and a fresh runner up at Yonkers in high conditioned event.”

Hip 32 Unmistakable — “A good looking daughter from the sensational first crop of Walner.”

Hip 56 Swift Swanda — “An outstanding trotting mare that is a racing / breeding prospect.”

Diamond Creek is selling five horses and some options to breed to its hot Ohio-based stallion Downbytheseaside.

Hip 6 Whimbel Hanover, who is carrying her first foal, a Chapter Seven — “She is a gorgeous young mare set to throw stunning foals. She is from the family of Creatine who will breed his first full book and is syndicated now thanks to Jujubee.”

Hip 209 Off The Record — “Is a hot offering. She is coming off a two-race winning streak and is eligible to the MGM Rewards Petticoat series at Yonkers. Out of a sister to Southwind Ozzi.”

Laungani added, “If you didn’t get that Downbytheseaside breeding you wanted, we have a few ways for you to get in with a share and two 2022 breedings offered for sale.”