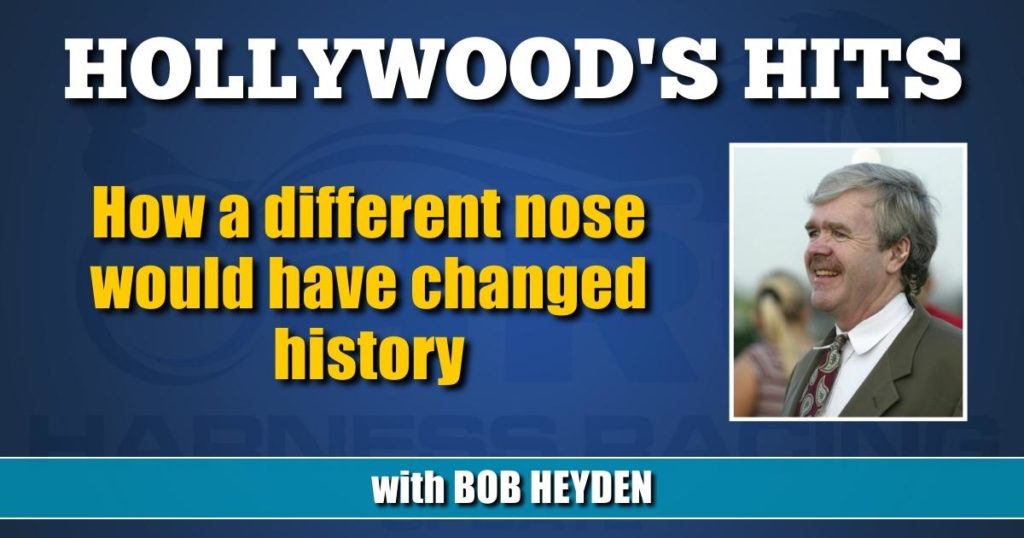 How a different nose would have changed history

What would have happened if some of the most famous victories in the sport’s history had gone the other way?

Bonefish over Yankee Bambino in the 1975 Hambletonian in the 4th and final heat. Neither trotter ever raced again. Bonefish, had he not won, would have given Stanley Dancer four career Hambletonian trophies as a trainer instead of five. For runner-up Walter Ross, it would have given him the honor of winning the richest race to that point in Hambletonian history ($232,000). Just two years later, Ross won the richest ever 2-year-old race to that point, the first ever Woodrow Wilson with No No Yankee for $280,000.

McKinzie Almahurst over Lon Todd Hanover in the $1,760,000 Woodrow Wilson of 1981. The fourth richest race ever saw Billy Haughton lasting on the lead over John Simpson, Jr. If reversed, Haughton would not be the only driver and trainer (in two separate events) to win a $1.5 million plus event — having taken the $2,161,000 Wilson of 1984 as a trainer with Nihilator. It also would have given sire Albatross his richest single race win. Remember, in 1979-1980-1981, he had the Horse of the Year all three years with Niatross twice and Fan Hanover.

Guy McKinney nosed out Guy Dean in the first ever Hambletonian in 1926. It wouldn’t have mattered to stallion Guy Axworthy, he sired both of the top two. But Walter Cox would have been elevated over Nat Ray and would not have had to wait until 1929 to win it with Walter Dear. Would the Nat Ray Trot have instead been the Wally Cox?

Jate Lobell nosed out Frugal Gourmet in the first million-dollar race in Canada, the 1987 North America Cup. Mark O’Mara with the 1986 Horse of the Year runner-up. Had the NA Cup gone the other way, then Frugal Gourmet would have been the first horse at age 3 to win two million-dollar events since he got revenge three weeks later in the Meadowlands Pace. Nihilator had won two races valued at over $1 million at 2 and 3 (Wilson at 2; Pace at 3)

Arizona Jack over Stout in the 1996 NA Cup. This one would normally slip through the cracks, except had Arizona Jack not got up a nose for John Campbell and Gary Machiz, then Campbell would not be the only driver to win the same million-dollar race four consecutive times: Cams Card Shark (1994); Davids Pass (1995); Arizona Jack and Gothic Dream (1997).

Wiggle It Jiggleit by a nose over Lost For Words in the 2015 Little Brown Jug. Twenty-four-year-old Montrell Teague with the incredibly game HOY WIJI and Dave Miller with the Brian Brown trainee just missing in an epic duel. Had this been changed, Dave Miller would now have six Jugs and stand alone on the all-time list.

Scott Frost held off Galophone by a scant nose in 1955 in the Hambletonian. Joe O’Brien over Billy Haughton. Had that one gone the other way, it would have forced a duel between the two again in a summary. As it was, Scott Frost was 1-1 and Galophone 3-2. Hey, who knows if we would have had to wait for our first Triple Crown winner (Speedy Scot won next it in 1963 on the trot; Adios Butler in 1959 on the pace). Remember too that Billy Haughton would not — possibly — have had to wait another 19 years for his very first Hambletonian at age 50 in 1974 with Christopher T.

Carls Bird an eyelash over Trutone Lobell in the 1983 Woodrow Wilson for a purse of $1,700,000,making it the fifth richest race ever held. Carl Allen over Cat Manzi. Had this been switched, it means Carl and Rod Allen would not be the only father-son million-dollar race winners (with Rod winning the 1992 Meadowlands Pace with Carlsbad Cam), it also means that the Catman would not have waited another generation — 21 years to be exact — to win his first million-dollar race (the 2004 NA Cup with Mantacular).

Jeff Gregory and Jonas Czernyson with Jalopy winning the 2005 Hambletonian Oaks over Blur. That was the first year that the fillies on Hambletonian day went for $750,000. That remains the richest race won by both. Gregory later drove both Market Share and Chapter Seven.

Hoot Mon won the Hambletonian rather easily in 1947 by two lengths. But take a look at the margins of his four Hambletonian winners:

Finally, who was the most famous member of the United States Harness Writers Association (USHWA) ever? Ed Sullivan, hands down.

A lifelong friend of harness racing, the host of “Toast Of The Town,” which then became the Ed Sullivan show, ran from 1948-1971. He died on Oct. 13, 1974. Here are the years and jurisdiction of his USHWA membership: