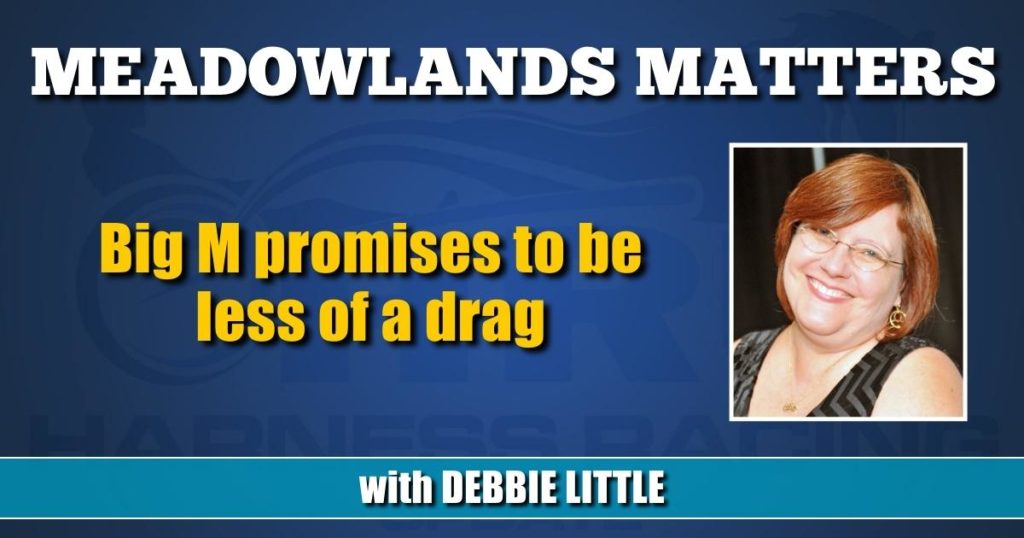 Big M promises to be less of a drag

If you’re going to The Meadowlands this weekend, it will be less of a drag, and if you can’t make it there in person, no worries, their new website is good to go.

With 15 races both tonight (Jan. 7) and Saturday night this weekend, The Meadowlands will experiment with a shorter drag time before each race in an effort to provide a better experience to its customers, employees and horsepeople.

The normal eight-minute drag will be cut in half in an effort to shorten the length of time needed to wrap up the card by a reasonable hour. By doing so, The Big M can monitor in real time the effect, if any, the shortened drag has on wagering.

In addition, the countdown clock, which normally starts 60 seconds prior to off time, will instead start at three minutes to remind everyone to get their bets in and not get shut out.

First race post is 6:20 p.m. and a Thursday press release from the track said that the horses should be behind the gate and rolling at that time.

Also, with their customer experience in mind, on Jan. 1, www.playmeadowlands.com got a clean, modern facelift and most importantly, it got smarter.

When The Big M website was last updated nearly 17 years ago, there were cell phones, but not smart ones. The old site no longer communicated perfectly with today’s technology.

“So, if you opened something up on your tablet or phone, you had to scroll over to see the entire page,” said Meadowlands’ director of marketing and event operations, Rachel Ryan. “This new site is responsive, as it conforms to whatever size you’re viewing on. Plus, it’s more intuitive as all websites have to be now.”

Motivate Design canvassed Big M customers and some non-racing customers and asked them a number of questions about what they wanted to see on the website. Then the Meadowlands team took that info and finalized the look they wanted.

For the first time, The Meadowlands’ event calendar can now be easily added to your Google calendar or iCalendar.

The event calendar lists Monday as the first day of the week, and although that’s not typical, it’s easy to get used to.

“We’re using WordPress for the back end and the calendar was a widget and so with all the tasks we’re requiring of the calendar this one kind of fit in best,” said Ryan. “So, I’m not saying it won’t change, but in the immediate future there’s no plans to change it.”

As with any upgrade, it’ll take time to work out all the kinks, but the info that the fans need, with the exception of the chart archive, is still there.

In the past, The Meadowlands set itself apart from other tracks by providing a chart archive that stretched back over a decade.

“When it was originally designed 17 years ago, it was just supposed to be a temporary offering where we’d go back a couple of years,” said Ryan, who worked on the previous upgrade. “So right now, we’re just working with the USTA [United States Trotting Association]. That coding is very labor intensive and we’re working out the details of how our servers are going to talk to each other. We have all intentions of bringing the chart archive back.”

Results are also a work in progress, because even though all the information is there, the charts currently appearing in post-position order instead of order of finish.

Unlike some other tracks that just link out to the USTA website for results, The Meadowlands prefers to provide their fans with additional information, including scratches, changes and driver choices.

“I do expect some growing pains and there to be some issues or display issues,” said Ryan. “[Customers are] welcomed to email me directly with any issues they see and we’ll see if we can make those changes or adjustments.”

Even though people rarely like change, the enhancements made present content in an uncluttered and easy-to-read format which should be appealing to most once they give it a chance.

Ryan, who has already walked customers through clearing their cache, setting up new bookmarks and finding whatever information they needed, says the feedback received so far has been extremely positive.

“It’s going to take a little getting used to, but then after a couple of weeks, you’re going to prefer this way better than what you were getting before,” said Ryan.

Big M executive chef Dennis Sammarone has come up with some tantalizing new buffet options for 2022.

A nightly menu for Pink and Trotters can be found on the new Big M website.

Due to a surge in COVID-19 cases in New Jersey, The Meadowlands is once again requiring everyone entering their building to wear a mask regardless of vaccination status.

“At the end of the day, we’re just trying to protect our employees, our customers and our horsemen,” said Meadowlands’ chief operating officer/general manager Jason Settlemoir.