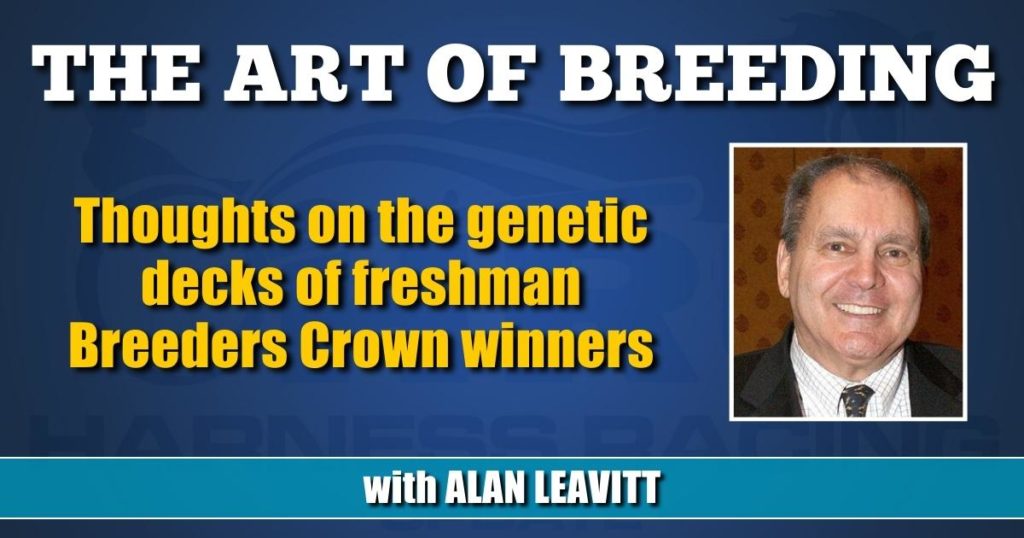 Thoughts on the genetic decks of freshman Breeders Crown winners 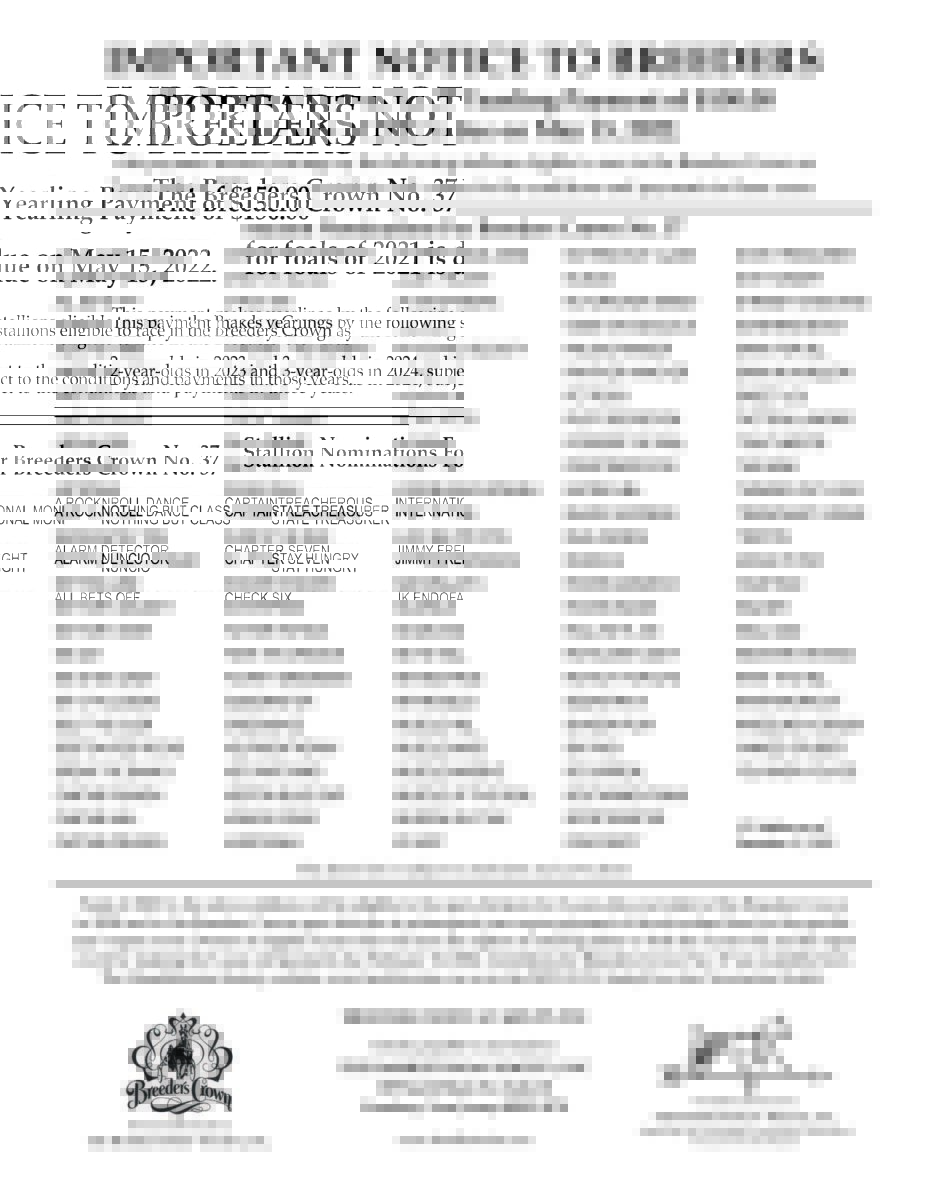 First, Kathy Parker has done us all a good service by having the USTA continue to publish the annual Breeders Book. Parker has also written an interesting piece in this year’s edition in which she discusses the maternal influence on each of the four 2-year-old winners of the Breeders Crowns in 2021.

Parker raises the question of which parent, the sire or the dam, has the most influence on a racing champion. Here, I think, I can give an answer to that question.

To begin with, we are talking about one gene, the speed gene, which exists to a greater or lesser degree in every standardbred’s genetic makeup. At the time of conception, each parent contributes 50 per cent of the new foal’s genetic makeup, and the two halves meld together to create their foal’s genetic inheritance.

This is where it is helpful to envision every horse’s genetic range as a deck of cards, running from a low of two to a high of ace. And each card represents that horse’s speed gene.

Both 2-year-old pacing champions are sired by Always B Miki. Based on their success, I would have to conclude that Miki is blessed with a genetic range that starts with a high card, say a 10, and runs straight up to an ace.

That means that at the time of conception, Miki always brings a high card to his half of the equation. So to produce a champion like Monte Miki, all his dam, Montenegro, has to do is come up with an average card, say an eight, and when the two cards meld together, their average is high enough to create a champion.

However, a mare can also be blessed with a genetic deck that only has high cards in it. Since Monte Miki is his dam’s only foal of racing age, it’s entirely possible that she also has a stacked genetic deck. Her next two foals are by Rockin Image and Always A Virgin, so it will be interesting to see how they do on the track.

The other pacing champion, the filly Niki Hill, while also by Always B Miki, is out of the Bettor’s Delight mare, Road Bet. From three foals of racing age, by two different sires, Road Bet has already produced Cattlewash $1,314,787, and Niki Hill, at 2 in ’21 winner of $904,557.

That record makes a compelling case for the assumption that Road Bet is herself blessed with a genetic deck that holds only high cards. If I’m correct, Road Bet will continue to produce fast, stakes winning pacers regardless of whom she’s bred to, barring only a certified loser of a sire, which is totally unlikely. And even bred to a clunk, if her owner ever lost his mind, the result would still be a decent racehorse.

Turning to the two trotting Breeders Crown champs, the champion filly is Joviality S, by Chapter Seven and out of Pasithea Face S, by Muscle Hill. Since Pasithea Face S is a Swedish-bred mare, we don’t have access to her extended pedigree with the correct family notes, i.e. records and earnings. So far as I can tell, Joviality is her first foal, but that is not a certainty.

One thing that can throw a casual observer off RE: Joviality’s pedigree are her dam’s earnings. Joviality’s dam won $579,565 in a brilliant racing career. And that great record on the track has absolutely nothing, zero-zilch, to do with her ability to produce a champion trotter.

You may be so tired of hearing this, but once again it’s necessary to remember that the phenotype of any stallion or mare, the visible horse, i.e. the great racehorse, has no relationship to the genotype, or the horse’s genetic makeup.

This is not to say that in the real world those two different elements are not deliberately confused. A recent release by a major breeder cited the racing credits of a number of mares just acquired. It also referred to the important stakes winners by various close relatives.

In point of proven fact, those good racing exploits will have nothing to do with their progeny’s ability on the track. Great racing ability is part of each mare’s phenotype. What kind of racehorses they produce will depend entirely on their genotypes, between which there is no correlation.

But in the real world, as I’ve already said, those mares command handsome prices as future broodmares, based on their racing exploits. And their foals will see high sell, at least the first two, based on the same thing. It will only be later that the market will catch up with each mare’s genotype, which will determine what kind of producer each one is.

The fourth and final 2-year-old Breeders Crown champion is Rebuff, by Muscle Hill and out of Meucci Madness, by Yankee Glide. In this case the dam has had enough foals by a variety of sires to clinch the case that she herself is not blessed with a genetic range of only high cards.

Rebuff’s sire, however, Muscle Hill, is the horse I frequently cite as a horse with a stacked genetic deck, indeed. So he would have needed only a card from near the top of Madness’s genetic deck to produce a champion like Rebuff.

Not that I wouldn’t be glad to own Meucci Madness (which sounds to me like the name of a decongestant), but she can’t you-know-what in the same stall as Road Bet.

So, the answer to the question of who matters most, the sire or the dam is this; In any case it can be either one or the other.

So that’s out of the way. Have a happy New Year, and all the best of 2022. And please, ask me some questions, okay?