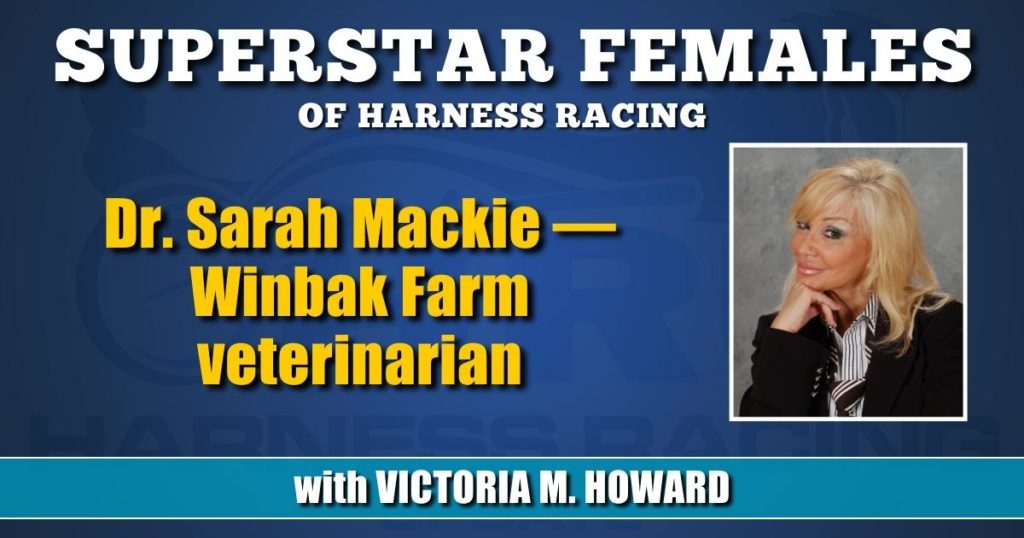 Born in Wilmington, DE, but raised on a small farm in Elkton, MD, Dr. Sarah Mackie still resides on that farm where chickens, ducks, pigs and cows kept the young girl happy and busy.

“At the age of 6, I knew I wanted to be a veterinarian. Sadly, my life was devoid of equids, but I wanted a horse so badly I would halter the calves and pretend they were horses. I saved my money and when I was 12 years old I purchased my first horse — a retired camp horse. I was not introduced to standardbreds until I was 15 when I was seeking summer employment.

“It was 1993 and Dorte, the wife of my first cousin, Eli Scott, (a standardbred trainer) was working at Winbak Farm. There was an opening for a groom there, so I took it and never looked back.”

“I did this all through high school and also during the summers while attending Virginia-Maryland Regional College of Veterinary Medicine.

“When I graduated from vet school in 2004 I was invited to come to Winbak Farm and practice, which at that time did not have a resident vet.

“This was a ‘no brainer’, for it meant I would be close to my family, plus doing what I always wanted to do — work with a very large broodmare herd in reproductive medicine.

“I have been Winbak’s resident vet for 17 years now and estimate that there’s been approximately 5,600 foals under my care during that time.”

Mackie said that being a vet for a large standardbred farm is not easy and leaves little time for anything else — but she wouldn’t have it any other way.

A ‘typical’ day depends on the time of year; of course breeding season is the busiest.

“During breeding season I start the day ultra sounding the mares at 6:30 a.m. on Monday, Wednesday and Friday — which are the days we order semen for the mares that are ready to breed. Afterwards, I usually head to the foaling barn to check on any new foals or mares that have had problems.

“The rest of the day is filled with uterine treatments, inseminations, examining sick animals, or embryo transfers.

“Tuesday, Thursday, and Saturday is when I usually do my pregnancy checks and it is not uncommon that I check close to 100 mares a day during the height of breeding season.

“Yearling prep season involves a lot of poring over with a fine-tooth comb so that Winbak can sell the healthiest, most attractive individuals possible.

“Besides prepping the yearlings, this is the time of year that entails a lot of paperwork and pulling blood for coggins testing to meet all requirements for the upcoming sales.

“As far as herd health management, such as vaccinating, all the different groups of horses in our 1,200-head herd and treatment of sick or injured animals – well, that’s a year-round venture.

“There are several things I find especially rewarding as Winbak Farm’s resident vet; such as working with a wonderful crew, who without them my job would be impossible; getting pregnancies from reproductively challenging mares, helping animals recover from severe illness or injury, and of course watching Winbak-breds do well in their racing careers.

“I also host several vet students each year. At Winbak, these zealous men and women get so much ‘hands on’ experience due to the sheer number of horses, and I love introducing them to our wonderful breed and watching them blossom as they move on in their career; plus they keep me on my toes.”

Along with all the perks and thrills of breeding mares, watching them foal, and seeing the foals develop into fine racehorses, unfortunately, some disappointments and heartaches occur.

“I think the hardest thing for me is losing a patient. It never, ever, gets any easier for each horse is special to me.

“It is especially tough saying goodbye to some of the retired mares because I have known these old ladies my entire time here.

“My favorite horses have always been my embryo transfer recipient mares. I spend a lot of time with them tracking their cycles, and many of them tend to be very affectionate. But there’s also Guapa — a huge Belgian draft used as a nurse mare that is dear to my heart.

“I find that it is somewhat easy to get mares to accept a newborn orphan as their own, but if a foal loses its mom a bit later on, usually no mare will want them.

“In comes Guapa who has adopted every single foal we put with her — including adopting two in one year. She certainly loves being a surrogate mama.”

Being a veterinarian requires all of your time and this can be difficult if you have a family and children.

“I’ve never been married and have no children — but marriage is definitely on the table for me. It would be difficult to keep up the hours if I had children. In fact, about half of all new veterinary graduates practicing on horses currently, change direction within the first five years — practicing small animal medicine instead, due to better hours and pay.

“With only one to two per cent of veterinarians graduating each year intending to practice on horses to begin with, this has created an equine veterinary shortage which puts even more pressure on those staying on that career path, and making it more difficult to maintain a balance between work and family life.”

Do you own any horses/racehorses?

“I have owned backyard pleasure horses in the past, including a couple of standardbreds. Last year, after years spent working on other peoples’ broodmares, I finally bought one of my own. Her name is Clandestine and she has been a part of Winbak’s herd for several years. She had survived laminitis in all four feet after a difficult foaling and I gained respect and admiration for her due to her resilience — plus she’s a sweetheart.

“I purchased Clandestine in foal to Heston Blue Chip and three weeks before her due date she colicked, requiring surgery, which was a difficult endeavor due to such a big pregnancy taking up so much space in her abdomen.

“A couple of weeks later in March of this year, Clandestine foaled a beautiful, big filly that I absolutely adore. Clandestine is back in foal to Stay Hungry, so fingers crossed things go smoother in 2022. I also purchased a Delaware bred Classic Card Shark filly at this year’s Harrisburg Sale for a little bit of fun.”

Since Dr. Mackie has been the resident vet at Winbak, many superstars were foaled there such as: Courtly Choice, Betterthancheddar, Roll With Joe, Devious Dan, Rainbow Blue, Newborn Sassy, Desperate Man, and the one and only Muscle Hill.