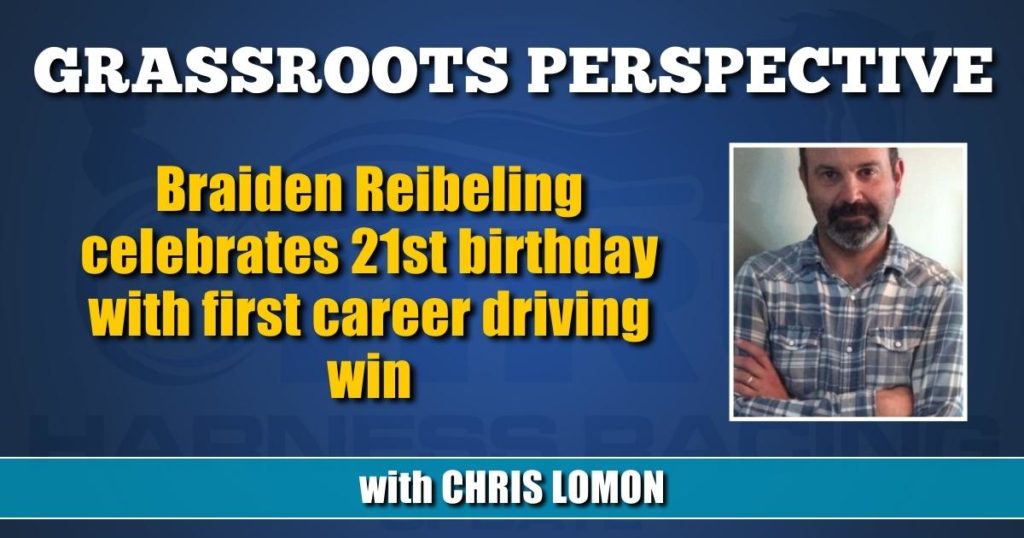 Two years after a serious car accident, Reibeling scored his first win — in just his fourth career start — with a triumph at The Raceway at The Western Fair District.

The rookie in the race bike looked every bit a seasoned pro.

It was just the fourth pari-mutuel drive for Braiden Reibeling on the night of Nov. 30 – which also happened to be his 21st birthday – at The Raceway at The Western Fair District.

In the minutes leading up to the race and as the field lined up behind the starter car, the young man wearing the green and white colors was anything but nervous or anxious.

And it certainly showed.

The duo made its move to engage the pacesetter to three-quarters and were nose-to-nose with their rival on the turn for home.

Shes Gold was able to gain the upper hand, en route to a one-length triumph in 2:03.3.

“I was confident going into the race, but you never know what can happen when you’re out there,” said Reibeling. “I was actually super calm. My first drive (Nov. 25 at Flamboro Downs), I was pretty nervous, but I’m not so nervous anymore.”

Instead, he let the race play out as it unfolded and called an audible seconds after the field was sent on its way.

“My plan was to go to the front. This filly, she’s actually a little grabby. So, that’s what the trainer wanted [to be on the lead] and that’s what I wanted to do, but a horse to the outside left hard. I thought, ‘Okay, let’s just take the two-hole ride and see what happens later in the mile.’ And that’s how it went, and it worked out perfectly.”

Reibeling wasn’t about to take his foot off the pedal in the closing strides.

“Down the lane, I’m realizing we’re in front and we’re going to win, but I’m not going to stop driving until I get across that wire. You’ve seen it happen so many times, those tough beats, and I didn’t want that to happen to me. I didn’t lose focus and I kept my head in the game.”

The win also gave the up-and-coming talent an education in adapting to a different scenario than what was originally anticipated.

Reading the situation and being able to make split-second choices, Reibeling noted, will go a long way in heightening his skill set in the sulky.

“You have to be able to make quick decisions any time during the race. You head into each one with a thought of how you’d like your trip to go, but that’s not always the case. So, when it doesn’t work out the way you hoped, you turn the page fast and then come up with a new plan.”

Keeping an open mind to advice is another must-have for a young driver, he said.

It’s why whenever someone offers up helpful tips, he’s more than willing to listen.

“My dad, he’s given me the best advice so far,” said Reibeling, of his father, longtime standardbred racing participant Kyle Reibeling. “He told me to always get the horse on the bit going to the gate and to have them ready to go, get them forwardly placed if I can, and if I can’t, then just adapt. That’s what I remind myself of every time the starter calls.”

Now, with his first win out of the way, there are more achievements that are top of mind.

His formula for success is hardly a new approach in sport.

At the core, hard work and resilience, Reibeling said, are the difference makers in the life of a driver.

He would certainly know.

Two years ago, Reibeling was seriously hurt in an automobile accident, a crash that produced a long list of injuries and several surgeries.

Despite the hurdles, he endured and regained his health.

His commitment to months of painstaking rehabilitation, going above and beyond what was required each day, is reflected in his approach to his harness racing craft.

“A typical day for me is – usually I’m training five or six of my own, but right now I have four – waking up around 6:30 or 7:00 at the latest and I go down to the barn and take care of my horses. I’m not a fast worker at all. I like taking my time with them. I hate rushing with a passion, so I just make sure everything is done right and that my barn is in good shape. I think the amount of work you put in is going to pay off. To me, rushing in the barn makes no sense. You’re only helping yourself by doing a thorough job.”

Reibeling does, however, carve out a few hours each day to take his mind off racing.

“When I’m done at the barn, I go up and eat lunch – my dad and I live at the farm we stable at. After that, I just like to relax and watch movies or a TV series, and enjoy that.”

There is also time allotted for setting goals.

In keeping with his work philosophy, Reibeling isn’t going to cut any corners to achieve some of his loftier aspirations.

“Short term, I’m not going to put a number of wins, but I want to keep winning and deliver those good results. The problem for a young driver is getting the drives at the start of your career. That’s the tough part. Long term is being a Mohawk driver, but that’s pretty long term. I think the biggest key right now is to keep learning, keep pushing myself to get better and make sure I am 100 percent prepared every time I race.”

Just like he has been for all of his starts to date, including that first-ever trip to the winner’s circle.

His preparation, like the care of his horses, is methodical and detailed.

“When I check entries, I’ll see who I’m up against. I’m trying to know every horse in Ontario. I look at the results every night and I check Trackit, to see the other horses that are in the race. I don’t care about odds… those mean nothing to me. I just go off what I know and what I study, and for my horse, I try and envision what the race is going to be like. You have to think what other drivers are going to do in the race, but also be prepared for what can change in a race. I do study a lot.”

Odds are it will pay off for Reibeling.

“I’m pretty patient and I’m super calm, which reflects my personality. I believe that helps me keep my horses calm, which is a helpful skill to have. I’m always going to try whether the horse is 100-1 or 2-1. That’s the way I approach it now and the way I always will.”